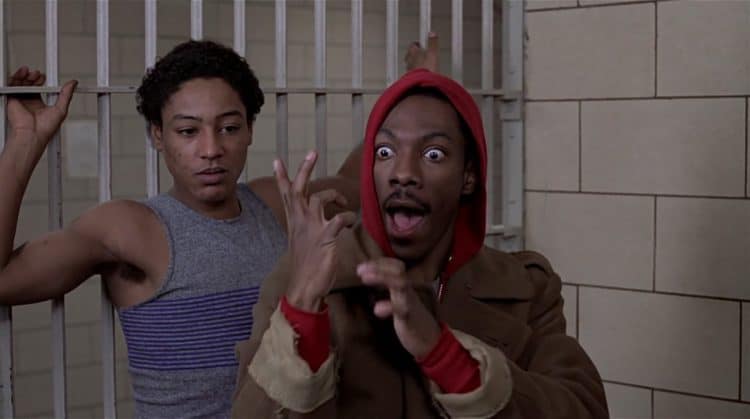 Giancarlo Esposito is one of those actors that can look like someone you’d want to sit and just chew the fat with for a while on matters of life, politics, or anything he’d like to talk about since it feels as though he might be a knowledgable individual. But thinking that he’s been in movies that people don’t remember him in is pretty easy since he’s another individual that can blend into the background when he needs to, and then stand out in a big way when it’s his time. As he’s grown older it’s harder and harder to not notice him any longer since he’s become a pretty big star that might not be as well known because of his name but is still someone that people will point to when they recognize him since he can have a pretty sinister look to him as well as he did in The Mandalorian. But there are some movies in which he’s wild-eyed, some in which he’s calm and rational, and others in which he’s almost a non-existent person as he’s more like a part of the scenery. In older movies, it’s easy to forget he was there since a lot of times he might have had a bit part or been someone that was only there for a minute or two.

Here are a few movies that people forgot that Giancarlo Esposito starred in.

There might be more people that remember this movie than not since it was about the life of Cassius Clay, aka Mohammad Ali, and while the movie was definitely put on blast by a lot of people over what was done right and what was so horribly wrong, the acting was pretty good. Esposito played Ali’s father, and the friction between them was pretty evident when Ali became a Muslim, but things did eventually calm down it would appear. Still, one can’t help but imagine what it would have been like growing up in those times since even the stories and accounts we hear don’t feel as though they do justice to the truth.

One thing that a lot of people continually forget about Malcolm X is that as militant and ready to speak out as he was, his views were changing near the end as he’d seen and experienced much concerning the nation of Islam that he hadn’t known. Where he was at one time a very devout individual that spoke out as much as he could and made it known that he was speaking, the days before his murder were spent far differently than they’d been in the past. His message had changed, and a lot of people feel that this was why he was killed. Esposito played one of the shooters that ended Malcolm’s life.

He played a detective in this mind-bender, but it’s fair to say that a lot of the attention wasn’t on him since much of it was on trying to figure out who Keyser Soze was since he was the driving force behind the movie. But by the end, it does feel as though a few people might have been putting it together, even if a few of those were just guessing. The whole thing about this movie is that it was told in a manner that was entirely misleading since it was all about a giant con that was being pulled at that moment inside that office. The rest is just details, more or less, since Soze had it all wrapped up.

2. Do the Right Thing

There’s racial tension all over this movie that is caused by those that feel the need to see fault with those that haven’t done anything to them and allow the violence to escalate in a manner that is, a one might imagine, kind of familiar given what’s happened in the current era. Buggin’ Out, Esposito’s character is one of the loudest voices of dissent when he demands that Sal change up his wall of fame that features all Italian American celebrities and include a few black celebrities as well. The trouble with this, even being in a predominantly black neighborhood, a business owner is allowed to display pretty much whatever they want so long as it’s not inciting violence.

To be certain, Esposito didn’t really do much in this scene save to interact a bit with Eddie Murphy’s character, who was popping off at the mouth in a big way right up until he made bail. This was one of those extra roles that a lot of people don’t really talk about since it didn’t go any further than this scene. But it was still one of his many appearances that people might recognize should they watch the movie. Plus it was a funny scene.

He’s definitely been getting even better with age.