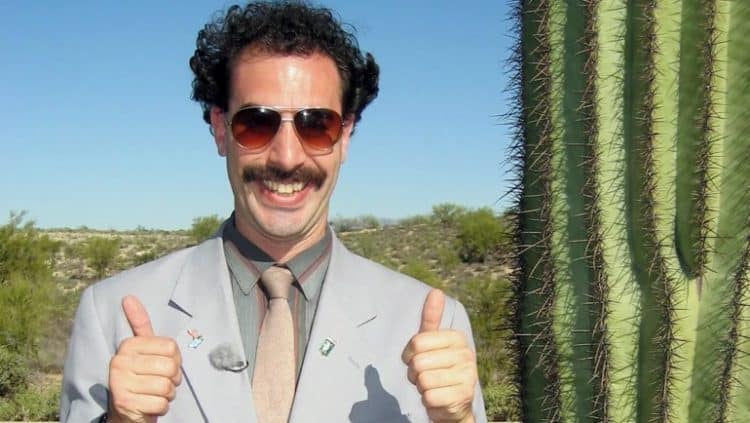 By now a lot of us know who Borat was and what Sacha Baron Cohen was trying to achieve. The shock value of his movie and the overall desire of Cohen to simply amaze people with his antics is something that’s well-documented and has made him a huge star throughout the years. While he’s calmed down since his Borat days it’s still enough to consider that when he was on screen and doing some of the most outlandish things and speaking in a way that would likely get many people locked up these days, the fact of the matter is that there were a few controversies that Cohen might not have fully expected. If he did then it means that he’s a man who likes to live dangerously and is well aware of the impact that his words are going to have on others. The downside of this is that he didn’t seem to care at the time.

Here are a few of the controversies that arose from the movie Borat.

5. Kid Rock and Pamela Anderson’s divorce was allegely caused by the events of Borat.

There was likely a lot more to the story than some have been made privy to but it would seem that the little stunt that Cohen pulled with Anderson was the last straw for Rock. When he tried to ‘abduct’ her from a book signing the first time it sounds as though no one tried to stop him, which meant it wasn’t the shot he wanted. But when he tried it again and caused a ruckus it was deemed that this was what he’d wanted and the move went off as he desired. Unfortunately this also meant that Kid Rock might have had a little too much of Anderson’s antics and filed for divorce not too long after. But again, it’s likely that there was much more going on.

4. A news producer in Mississippi was fired for booking him on her show.

Roger Cormier of Mental Floss made it known that Dharma Arthur of WAPT-TV in Mississippi was fired for letting Borat on the show. This was how real everyone thought his act was, and how much trouble it actually caused since while comedy isn’t supposed be hemmed in and given a strict set of boundaries, the people that enact the comedy sometimes get a little nuts and should probably think of the consequences that follow in their wake. Cohen kind of cut through the reputations and lives of those he touched without that much regard for what he was doing it seemed, though many people thought it was simply hilarious.

3. Two students at South Carolina University were made the subjects of ridicule.

This one might not garner a lot of sympathy since college kids tend to make their own mistakes without anyone’s help. But it would appear that these two students were made the object of such ridicule and scorn that one of them eventually had to drop out of school. Again, it’s hard to feel bad for anyone that had their feelings hurt because they were made to look bad in a movie. But once again Cohen kind of took things a little too far at times and simply didn’t seem to think or care about what he was doing when it came to how it affected other people. That might sound prudish and immature, but so does making a mockumentary and fooling a great number of people into thinking that you’re a real journalist.

2. The FBI was following the cast during the movie, no joke.

They were driving around in an ice cream van and acting in a way that made people uncomfortable while filming it. That should be all that needs to be said really when it comes to explaining why they were on the FBI’s radar in the first place. The fact that Cohen had a warrant out for his arrest in New York at one point and the fact that a lot of people felt insanely uncomfortable around him should have been enough to warrant the thought that it might have been time to dial it down a few notches. But then that wouldn’t have been Cohen’s style at that time.

1. He almost caused a riot at a rodeo.

Devon Ivie from Vulture gives a great reminder that he attended a rodeo under the ruse that he was going to sing the nation anthem, but instead decided to get out in the middle of the arena where he proceeded to bash America for many different things. Take the time to sit back and collect your thoughts on this one and then see the lack of wisdom in it even from a comedic point of view. A person that’s not American went to a Rodeo, one of the favored pastimes of many Americans, and verbally bashed the United States of America. It was a wise decision by the cast and crew to beat feet and make their way out, otherwise many agree they might not have been leaving that place under their own steam.

To this day some people still shake their heads and roll their eyes when Borat is mentioned.