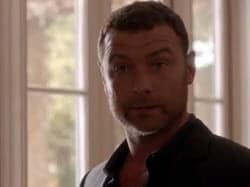 Watching an hour long show and sticking with it is difficult, unless you have all the time in the world and the internet at your fingertips.  In such a case, many things would be a far better investment of time than watching the Showtime drama Ray Donovan.

Being only in its fourth episode, one would assume momentum would be picking towards….something.  Essentially each episode, such as this week’s episode “Black Cadillac”, has been little more than a poor excuse for a drama.

Last week we were introduced to FBI Agent Van Miller, who supposedly is responsible for getting Mick released early for his own reasons.  The show opens with a very odd shot of Agent Miller starring out a window watching the snow fall.  Once he turns to the bed behind him we see Mick (the continually cringeworthy Jon Voight) performing doggy style on some unknown woman who is given a very clear close up.

If that turns out to be Miller’s mother, I will not be surprised.  Or maybe it’s a hooker he and Mick tag teamed?

With Agent Miller’s involvement unknown to him, Ray concocts his plan to have Mick tossed back in prison for the murder of not the priest who molested Ray’s brother Bunchy, but the priest’s brother.  Even a bad father would know the face of the guy who raped his kid.  Not Mick Donovan.

This is one of major issues I have with this show.  Jon Voight is a good actor, not great, but good.  See Anaconda. Throughout the first four episodes of this series, which apparently is so good that Showtime has already renewed it, Mick has been the best/only source of levity or comedy at all. 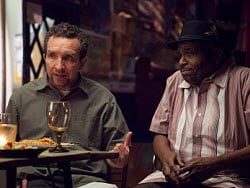 I do not mean to say Mick is funny, because he is not.  Between making jokes about pedophiles at his son’s support group, watching booty videos at the library and telling Darryl, his black son, he comes from a “great f***” he’s done little to obtain any credit for being looked at as interesting, funny or as Ray has called him, “the wolf”.

Back in the lackluster world of our main character, Ray awakes to a family day.  Today everyone will be going to see the beautiful Bel-Air Academy, a very prestigious school for girls who want to find themselves and boys who like to call each other gay.  Normal high school stuff, but in much richer white setting.

Before going off to visit the school the family is sent off with a greeting from Marvin, the recently adopted son of neighborhood rapper Re-Kon.  Marvin is starting to express interest in Ray’s daughter, the annoyingly dull Bridget.  In the car Abbey, Bridgett’s mother jokingly asks “Who names their kid Marvin anymore?”  Not wanting to be looked at as a joke, Bridget shows offer her whiney high school girl chops by telling her he was named after Marvin Gaye, a king of R&B.

Gee, I wonder if this will lead to some gut wrenching awkwardness, like Ray finding out Marvin asked her to send him pictures of her.  Don’t you just love stereotypes?  They make television such much easier to watch (sarcasm).

While the Donovan clan enjoy listening to educational matters, Mick, Bunchy and Darryl go to see Darryl’s mother so Mick can get back “what’s his”.  Than we meet Claudette, Darryl’s mother and her husband Allen, a rich a prominent man in the movie business.  Where Mick goes horrible awkwardness follows as he hugs Claudette followed by Allen offering everyone a beer……or a lemonade.  It was a moment where I thought “Please let this end!”

With about as much foreshadowing as the show can muster, Bridget has a chat with some of the current students of the academy who suggest to her when she attends school there she can become whoever she wants to be.  The combination of that, a boy her father is not fond of and her being teenager is the perfect mixture for an emo loser. 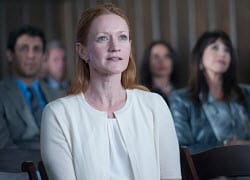 In the titular moment of the episode Claudette takes Mick out to the garage where she has kept his black Cadillac.  This is another scene that tries to ellicit comedy, with a trunk full of dirty items, and heart with Mick and Claudette dancing and kissing with about as much passion as a dead squirrel being run over for the third time.

Normally, when episodes have lousy A and B stories there can always be a good C or D story to fall back onto.  Not so here.  We follow Terry, Ray’s boxing gym owning brother, prepping for and during his date with his nurse whose name, like so many, I have had to look up but couldn’t find.

OK, it’s understood that Terry is a boxing meathead and he can’t really run his business due to him being scammed by young boxing students, but they are really trying to make this guy look worthless.  Not worthless like on “As Seen On TV” ads where people can’t make eggs or answer a phone without strangling themselves with their own blanket.  No, he has little to no social IQ.

When the nurse compliments him on his shirt and he says thank you there is at least two beats before she has to ask him if he thinks she looks nice.  Look I’m all for a character that isn’t the smartest or best looking or good at taking down drug lords but give me a break!  If this was awkward comedy it would be tough to bear (See Steve Carrell), but this a drama and it’s even more torturous.

To wrap up the school visit arc we end with Stu, the Hollywood scumbag Ray has had recent business with (Broke his arm in a pool table pocket), asking why Ray’s son, Connor, hit his son in the back of the head.  Twice during the episode Stu’s son, with a flipped up white polo collar, made jokes suggest Conner is gay.  Typical rich white stuff.

This is not a great scene for two reasons, A) Connor just seems like he is swaying between biting his lip out of  anger and pulling a Jimmy Fallon and cracking up on camera and B) it goes on two lines too long.

After the Donovan family have walked off Stu asks his son why he let Conner hit him, to which he replies he didn’t see it coming.  Cut, end scene, what was gained by these two lines for these two horrible characters with regards to story?  From what I can see, nothing but filler, terrible filler.

Once home the Donovan family sit around the kitchen table in a near pitch black kitchen.  Why pitch black?  I have no idea.  If this show is making an attempt at a noir vibe they are failing miserably.  It is then that Ray learns from one of his underlings that his plan to have Mick arrested was squashed by the Boston PD Commissioner, subtly suggested to be the work of Agent Miller.

We learn later when Miller confronts Mick about leaving town without checking that he has taking care of the Boston matter for Mick so he can help him, Miller, take down Drexler and Erza, Ray’s lawyer associates and Ray himself.

Before the credits roll the show makes one last attempt at what I can only describe as weak tea humor.  Mick asks Bunchy and Darryl to join him for a nightcap at a club to which they decline saying it’s not what he thinks it is.  Shrugging their words off he walks in while they drive off laughing knowing it is a gay night club.  The last scene is Mick dancing surrounded by numerous topless men.  This show is continuing to go down a path that is sad, boring and uninteresting to the point that I may need to eat tinfoil while watching.