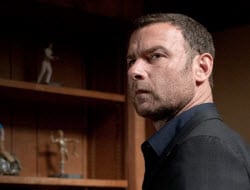 A lot can happen in five hours, sadly they don’t have to make sense in the world of Showtime’s Ray Donovan. While watching the most recent episode I was forced to consider that this show is just an elaborate prank on me. It’s a show that has so much potential but stubbornly refuses to live up to it.

There are scenes that have little to no pay off and make less sense. We are treated to a subplot of Bunchy depositing his check from his molestation lawsuit and what he does with it. On paper it sounds good. In practice it is an excuse for John Voight’s Mick to act like a jerk-off and for Bunchy to ride a bicycle. What does this have to do with anything? Nothing.

In another throwaway scene, Abby, Ray’s wife, sits with a fellow yoga student who says she is a life coach, because that’s a thing apparently. When probed about Ray, Abby storms off in a very Boston way.

The focal point in the episode is a meeting between Mickey and Ezra, Ray’s friend and mentor, who needed a name so different that you’ll remember it, which I didn’t. Wikipedia, I love you.

Instead of being a well grilled steak the scene between Mick and Ezra is a dry and rubbery pork chop covered in……BLAH.

There is no anger or fear, no tension. Their discussion leads to why Ezra helped put Mick in prison, and also Ezra moving some flowers outside because it helped build his character.

The high point of the scene is one of the worst scenes ever on television, since Kate on “LOST” and that is saying something. Due to having a brain tumor Ezra starts to hallucinate that Mick’s skin is darkening into…..I have no idea. Apropos of nothing, Ezra starts shouting “The Golem!” which we know about. Oh, wait, no we don’t.

From what I gather, a golem is a term from Jewish folklore to describe a guardian made from inanimate matter such as clay or stone. I can see how that would fit into the story here. The previous sentence should be in sarcasm text.

To add to the cartoonish nature of the scene Mick runs away as Ezra is tended to. I say run away in the sense that John Voight would have looked better getting on a scooter than actually running. It was the4 first time he has been genuinely funny. Though not on purpose.

It is really hard to care about any of these characters. The Hollywood area is not a great location for a show. Typically people there are seen as shallow, cold, manipulative and soulless. This is one of the reasons “The Walking Dead” is so successful. It’s set in Middle America and most of the shallow soulless people are zombies. That’s what television needs, more zombies.

Some amusement could be found in Lena, Ray’s PR person, dealing with the Pop Star who tracked Ray down to have sex with. If none of that made sense don’t feel bad. I wrote it and have no idea what it means, kind of like this show.