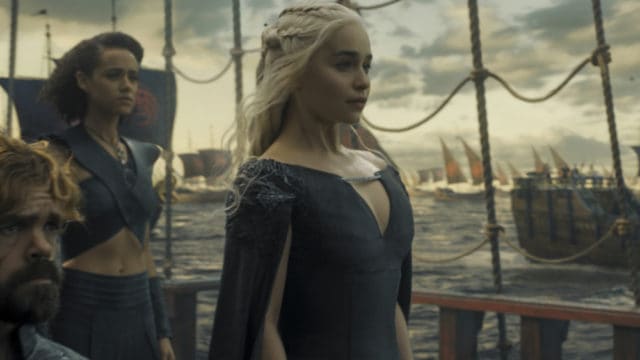 Fans of “Game of Thrones” are gearing up for the show’s eighth and final season which will premier in 2019 and only include six episodes. The HBO series based on George R.R. Martin’s “A Song of Ice and Fire” series of novels is sure to come to an exciting end. Because the eighth season has mostly been created after the last novel, fans aren’t sure what to expect. Who will win control of the Kingdoms of Westeros and Essos? As the series has progressed, it has included action, intrigue, politics, death and magic. The season finales are always aimed to leave us wanting more.

Here are the “Game of Thrones” season finales ranked.

The Season 3 of “Game of Thrones” wasn’t the best season finale of the show, but it was what fans needed after the previous episode “The Rains of Castamere”. That episode provided one of the most action packed and devastating scenes of the series “The Red Wedding”. The Stark family was nearly annihilated while attending the wedding that would have united the Stark and Frey families. The deaths of Robb Stark and his mother Catelyn was shocking, bloody and devastating. The season finale was like an epilogue as fans hearts were broken. The season finale helped segue the show into the Season 4. We were introduced to Reek. Bran Stark went north of The Wall. Jon Snow returned to Castle Black leaving behind Ygritte and the Wildings. Daenerys made her ascent into Mereen.

Season 2 of the series showed major shifts of power that would lead into Season 3. After his heroics in the Battle of Blackwater, Tyrion found himself awake and wounded and no longer the Hand of his nephew Joffrey. Tyrion’s father Tywin took the title of the King’s powerful aide. As for the Stark’s, their actions in the finale would lead to the next important step in their lives. Robb would secretly marry Talisa nulling his important union with the Frey family. His actions would lead to the Red Wedding. Jon killed Qorin Halfhand to gain the Wilding’s trust. Arya received the Braaosi coin from Jaquen H’gar which would lead to her journey to become No One with the phrase “Valar Morghuls”.

The first seasons of “Game of Thrones” were not as dramatic as Season 5, 6 and 7’s finales. The character’s fates in the Season 5 finale were dramatic and would ultimately lead to different outcomes in Season 6. Ramsey would take control of Winterfall. Cersei was completely shamed when she had to walk through the city naked as the crowds that once honored her jeered her and through garbage at her. Jon was fatefully stabbed by his own men of the Watch. Season 6 would see Ramsey defeated and dead, Cersei in power once again, and Jon miraculously brought back to life.

Season 1’s finale of the series brought the beginning episodes of “Game of Thrones” to a climax leading to the anticipation of following seasons. Fans saw just how immature and evil the boy king Joffrey could be. Not only did he have his man assault his betrothed, Sansa Stark, but he ordered the beheading of her father, Ned. Sansa was forced to watch her father’s death along with the crowd which included her young sister, Arya. Ned’s son Robb was named King of the North starting the savage and political war for Westeros’ crown. In the final scene, Daenerys finally asserts her control and powers. After her husband, Khal Drogo’s corpse is set afire in a bonfire, she steps into the middle of the fires only to emerge unharmed with the three hatched dragons wrapped around her body.

The final episode of Season 4 of the series won critical acclaim. The highlights of the finale included Bran Stark reaching the Heart Tree and the prophecy from the Three-Eyed Raven that he would never walk again, but he would fly (as the Night King’s Ice Dragon?). Brienne of Tarth fought and killed Sandor “The Hound” Clegane after Arya left him to die. The most dramatic scene of the Season 4 finale was Tyrion escaping prison, finding Shae in his father’s bed and killing his father as he sat on the toilet.

2. Game of Thrones Season 7 Finale – “The Dragon and The Wolf”

With just 7 episodes, Season 7’s finale didn’t disappoint. Cersei and Daenerys negotiated as Cersei and Jamie fought. The season was also filled with dramatic action. Sansa and Arya united against Peter “Littlefinger” Baelish leading to his death. As Daenerys and Jon Snow united and made love, Bran narrates Jon’s true origins. He is not the bastard child of Ned Stark but the secret son from lovers Rhaegar Targaryen and Lyanna Stark making Jon the heir to the throne of Westeros and Daenery’s brother. We also saw the dramatic fall of the Wall by the Army of the Dead.

1. Game of Thrones Season 6 Finale – “The Winds of Winter”

Overall, Season 6’s finale is the most critically acclaimed and one that fans loved. Cersei Lannister truly gains power and will destroy all of her enemies quickly. Arya Stark finally gets revenge on the Freys for the Red Wedding. Jon Snow is declared King of the North. Bran learns of his half brother’s true parentage. Finally, Daenerys is headed to Westeros with Tyrion Lanister, her army and allies Yara Greyjoy, the Tyrells, and the Sand Snakes. Of course her three dragons are headed with them to fight for Daenerys’ rightful crown.