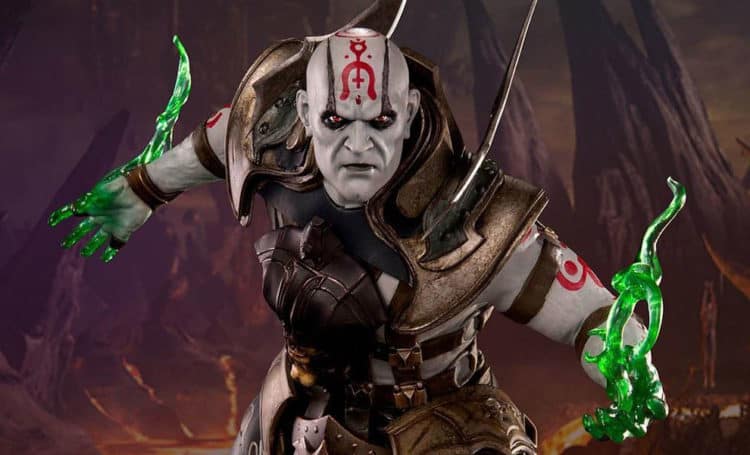 It looks like a Mortal Kombat sequel is in the works. I’m not too surprised, but I’ll just say right off the bat, I hope Quan Chi makes an appearance. He was never my favorite character to play as, but you have to acknowledge his villain status in the whole franchise. I’m talking about every game, every cartoon or television adaptation attempt, and only the movies have done him dirty. I honestly can’t even remember if he was in Annihilation. Hey, it’s tough to get past the opening twenty minutes of that movie, so don’t blame me. If you’ve been following the games since the beginning, you can argue that this demonic sorcerer is perhaps the biggest villain of them all. Even bigger than Shao Kahn and Shang Tsung? I would argue yes and that is precisely why he needs to be in Mortal Kombat 2. I’m just going to lay my theory out right now and say that Quan Chi will be the secret villain of Mortal Kombat 2. The first movie ended on a big cliffhanger, with Shang Tsung swearing vengeance on Raiden and the rest of the Earthrealm warriors. If the first movie adapted the events of the first game (kind of), then the sequel will most likely cover the events of the second game. For you big fans out there, that means our heroes will be going to Outworld for a second tournament. That does sound kind of strange, given that the first Mortal Kombat tournament didn’t really happen. I thought that was one of the most disappointing elements of that movie, but hopefully the sequel will fix that.

I think Quan Chi needs to be the main instigator of that tournament coming together. In the games, it was Shang Tsung who suggested that Shao Kahn host another tournament in Outworld in a desperate attempt to save his own life. This succeeded and the emperor agreed to harass the Earthrealm warriors into agreeing to the tournament. Now if you played the 2011 reboot, you’ll know Quan Chi had a big hand in that scheme. In fact, it was later revealed that he was working as a double agent for the fallen Elder God Shinnok. We remember how all of that turned out, and the scheming sorcerer finally met his demise at Scorpion’s hands. That’s why he wasn’t a part of the roster in Mortal Kombat 11. Hey, that’s all good, because we’ll get to see him in the movie. I believe not including him will be a mistake, especially since he had no part in the first one. That’s a huge deviation from the first game, since Quan Chi was revealed to be the real killer of Scorpion’s family and clan. Using his sorcery to disguise himself as the first Sub-Zero created one of the biggest rivalries in video game history. And hey, we can’t forget that it also led to him creating another great villain of the franchise, Noob Saibot.

That’s another thing we should take note of. The first movie ended with Scorpion and Cole Young killing Bi-Han, the first Sub-Zero. This is a good set up for the introduction of Quan Chi, since Noob Saibot is his top assassin. That’s only one of his many minions who serve him from the Netherrealm. Feinting loyalty to Shao Kahn is all a part of his scheme to free his lord Shinnok from imprisonment. That should be no different for the Mortal Kombat sequel. That is the ideal place for Shao Kahn to be the final physical challenge for the heroes, while Quan Chi works behind the scenes to have both sides tire themselves out. And where does all of this lead? A third movie where Shinnok is the villain and Quan Chi is his right-hand man. Yeah, I know I’m getting ahead of myself a bit, but where else can this go? If the sequel wants to be better than the first one, it needs to follow the lore more closely. I do expect it to change some thing up, but not the villainy of Quan Chi. His powers and manipulative nature is what makes him one of the greatest villains in Mortal Kombat. The best part is, he doesn’t even do much of his own fighting. He gets his minions to do his fighting for him and when he does fight, he’ll use very powerful dark magic.

Just look at his fatalities and you’ll see exactly that. He’s got some of the most gruesome fatalities of the whole roster and I’d like to see them in the sequel. But hold on, if he’s in the movie, what use is there for Shang Tsung? The only thing I can think of is Deadly Alliance. Having two villains who can barely stand each other working together makes for a fun storyline. Their uneasy partnership caused a lot of problems for the heroes in the games and resulted in a new hero named Shujinko joining the roster. Okay, so maybe leave him out, but the Deadly Alliance is something that should be considered. When Shao Kahn enters the fray, he may be too much for the heroes to handle. His two sorcerers could help in eliminating them, but their real intentions would be treachery. Neither one of them is interested in serving Shao Kahn and one is just as treacherous as the other. To me, that sets up for multiple villains having their own goals in the sequel. We normally don’t expect villains to work well together, but when these villains fight each other, it’s like all hell breaking loose. That is literally what Quan Chi is aiming for. He convinces Shao Kahn to invade Earthrealm so the Elder Gods can interfere and kill him, but not before he weakens Earthrealm’s defenders. Shang Tsung will plan to turn on him, but Quan Chi will anticipate this betrayal and be prepared.

The only thing that’s missing is that Quan Chi didn’t kill Scorpion’s family. That means Scorpion has no reason to pursue vengeance against him. The sequel can still figure out how to set up that rivalry, the best way being Quan Chi pitting Noob Saibot against Scorpion. All of this sets up for his secret plan to have both sides wear each other down so Shinnok can take them all out. The true strength of Quan Chi is his scheming nature and the sequel needs to exploit that.