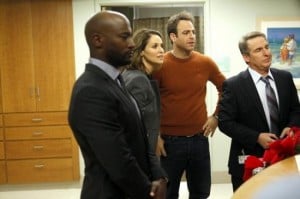 The penultimate episode of Private Practice saw a return to the type of storytelling we’re used to — meaning, we saw everyone’s perspective.  But yet, the episode was just a little more intimate than most, highlighted by each doctor ‘conversing’ with baby Georgia as she awaited the birth of her sisters.  Considering that each doctor’s place in “Full Release” directly draws back to their personal episodes, it seems only fair to give them each their own recap.

Last night’s episode began at the ending of the past several with Charlotte just beginning labor with the remaining two triplets, though the first thing we see is baby Georgia squirming around in her little hospital bassinet, as daddy Cooper explains that her sisters are coming and her aunts and uncles are going to keep her company, which they do…but not before trying to vote on the last two baby names.  Of course, Charlotte is none too pleased about their attempt and kicks them all out, citing that the only ones who can vote on names are “Mason and those who provided genetic material.”

After being on bed rest for months it’s logical that Charlotte is just a little impatient for the arrival of her babies, however, labor for the chief of staff is not moving along quickly at all.  Yet, despite her own pain, she urges Cooper to go take care of Mason and shoves Addison off to Henry’s court date, though…she guilts Stephanie into staying with her (though she later sends her off to see her ‘lurking’ boyfriend, Sam).  Could it be Charlotte has finally made something of a friend?

As Charlotte struggles through labor, Cooper and Mason are busy elsewhere — trying to buy a house.  After putting in an offer on a place to surprise his wife with, Cooper finds out that he has to go interview with the homeowner, essentially making his case and competing with the other family who bid on the house.  Ever charming, Mason does his best to win over the older woman selling the home, but when the competing couple shows up, things just don’t look too good.  They seem to have much in common with the seller and take every opportunity to put down Cooper’s profession and medicine in general.  Cooper looks rather dejected at their prospects, but it all becomes irrelevant when he gets the phone call that Charlotte is ready to deliver their girls and he rushes out after speedily explaining their story to the seller and other couple.

Back at the hospital Cooper is right by Charlotte’s side (with Amelia) as she brings their last two triplets into the world.  All is well with the first baby, pink and perfect and crying, but it just wouldn’t be an episode of Private Practice without some last minute drama.  The third triplet is transverse, forcing Addison to manually turn her for delivery.  Thankfully though, everyone makes it to the other side okay, three healthy babies and mom!

The names of the King-Freedman babies, you ask?  With contributions from Mason and Cooper, plus Charlotte’s pick two episodes ago, the family is complete with Georgia, Caroline, and Rachel King-Freedman.

And, they win the house!

One of the sweetest sub-plots of the episode was Sheldon’s.  Now, we know he had met Miranda, a terminal breast cancer patient who he fell for weeks ago, and it’s finally time for Sheldon’s friends to meet her.  The couple shares lunch with Violet where it becomes apparent that Sheldon is hesitant about sharing all the details of their relationship.  Instead of revealing his own cancer scare, and Miranda’s mortality to her, Sheldon answers that they met at a vending machine.  While it is technically true, Miranda isn’t comfortable with lying to his friends.  She tells him that she wants them to know, wants to know that he will be okay after she’s gone.

But Sheldon’s not ready to think about her being gone.

Ultimately, he caves…sort of.  As they wait for news of the triplets’ birth, Sheldon tells Sam about Miranda and the truth that he met her at radiation treatment.  Sam quietly admits that he’s glad he got treatment — if you remember, Sheldon was originally angry with Sam for his diagnosis and the push to have his prostate cancer treated.  On a very light laugh, Sheldon remarks that he has a friend “who’s a real pain in the ass about it,” and thanks his friend.

Since she was one of the first given a focused episode it’s been a while since we’ve really seen Violet.  In the opening moments of the episode she’s in the process of buying a rather large assortment of children’s books for the triplets.  Innocent enough, right?  Well, just as she’s preparing to pay for the order the cashier pulls out her book.  Apparently, he’s a fan.  The gentleman sweetly asks her to sign it, which she does, and then proceeds to flirt with her.  His compliments are well taken, but then he asks the question.  He asks about “the husband” from the book, to which Violet bluntly replies that he’s dead before scurrying out of the store.

Her issue with the incident escalates when she passes Sam and Stephanie, very happy, in the halls of St. Ambrose, and she just cannot stop crying.  Sam later finds her zoned out in the break room of the practice and asks if she’s alright.

Violet spills her bookstore encounter to Sam, her tears, and the fact that she has come to the conclusion that everyone is out there living, and she’s just…here.  Everything going on with her friends has made her realize that she will never have another child, as her memories of pregnancy and childbirth have been tainted by Katie Kent, and her marriage experience with Pete, though she loved him, was a mess.  So, what’s left for her?

At first Sam has nothing to say and settles to hug her, but stops himself.  She’s not done, he tells her — she’s a work in progress.  He makes her realize that life is unpredictable, and her story is not over.  After all, would she ever have believed him if he told her years ago that she would marry Pete and have a child?

It doesn’t seem to have truly hit Violet until she spends some time with Georgia, and realizes that the “dead prince can’t be the ending.”  She heads to pick up the gift basket of books much lighter, however she does turn down the clerk’s offer of a date.  She’s still working on herself, she tells him, agrees that they can be friends, and even decides that she is going to write another book.

Though she doesn’t have a title — it’s a work in progress.

Though we may have just seen how Amelia has been handling the past months, this episode shed light on a different part of her story, and was something I have really been waiting for.

“Full Release” finally showed how Amelia has been affected by the loss of her son.

We’re barely into the episode when James asks her how she’s doing watching Charlotte go through labor.  Amelia claims that she’s fine, though she completely freezes when James asks if she wants to have more children in the future.  It’s during her talk with Georgia that she decides she doesn’t want any more babies, despite her love for them.  As evidenced by her past, it doesn’t matter how much you love someone, the world is terrifying nonetheless, and Amelia is petrified that her body can only make brainless babies.

She seems almost dejected as she sits with Charlotte during labor, though she caves at the sight of Charlotte’s pain and offers comfort that had helped her in the same time of need.  It’s rather touching when Charlotte begins to apologize and Amelia stops her.

The turning point for Amelia comes as she helps during the birth, witnessing the triplets’ arrival.  She’s stunned at the sight of the newborns, amazed, and runs to tell James that though she’s afraid to admit it, she wants to have babies with him someday.

He assures her that they will get that far.

For Addison and Jake, the hour starts of incredibly hopeful.  Addison is just inches away from legally calling Henry ‘hers,’ and Jake has already begun to make celebration plans.

However, during the court hearing things change.  The judge seems all prepared to rule in Addison’s favor until he receives a fax from Mildred, Henry’s social worker.  The judge acknowledges the concerns, stating that he can’t make a final decision just yet, pushing Addison into the paralyzing fear that she could lose Henry.

Rather than waiting for official word, Addison goes to see Mildred on her own, demanding to know what she did.  The social worker tells her that though she loves seeing Henry with Addison, she cannot forget her concerns about Jake based on his behavior — beating up his late wife’s drug dealer, and threatening his daughter’s much older boyfriend.

One would think no one would be more hurt than Addison, but when she tells her fiancÃ© about the bump in the road, Jake looks near to breaking.  He is not willing to settle for such a fate of losing the little boy and takes matters into his own hands.  Much like Addison sought out Mildred, Jake visits the judge.  At first the judge doesn’t seem willing to listen, but Jake stands up for the actions he took to protect his child both when he was arrested, and when he tried to stop Angela’s relationship with her professor.  He assures the judge that he would do the same for Henry, and even offers to leave Addison if it will ensure that she keeps her son.

The family’s fate is still uncertain as Addison chats with the King-Freedman girls.  She shares her love for Henry with them, and her uncertainty about what she would do should she have to choose between her son and her fiancÃ©.

She is still uneasy when she makes it home, cuddles Henry close as if he is going to be pulled from her arms, and finds herself perplexed when Jake enters and asks when she wants to get married.  They shouldn’t discuss it yet, Addison replies, since they don’t know what is going to happen or what the judge is going to say.

But Jake knows what the judge said.

He passes Addison official documentation that Henry is hers, and asks again, “When do you want to get married?”

This episode was a fantastic lead-in to the series finale next week.  While each episode focused on an individual character gave insight into their own problems, “Full Release” showed how they each made peace with all that has happened, and even saw them all happy at the end of the hour.  I love that Charlotte finally allowed herself to be happy, Sheldon put aside his anger with Sam and admitted his cancer, Violet came to some sort of resolution about her life, Amelia moved past the birth and death of her son (something I’ve been waiting for the show to address), and Addison is right on the cusp of having her own happy ending.

I still can’t believe Private Practice is coming to a close.  As a long-time fan, I’m not sure that I’m quite prepared for what next week has in store.

What are your hopes for the Private Practice series finale?