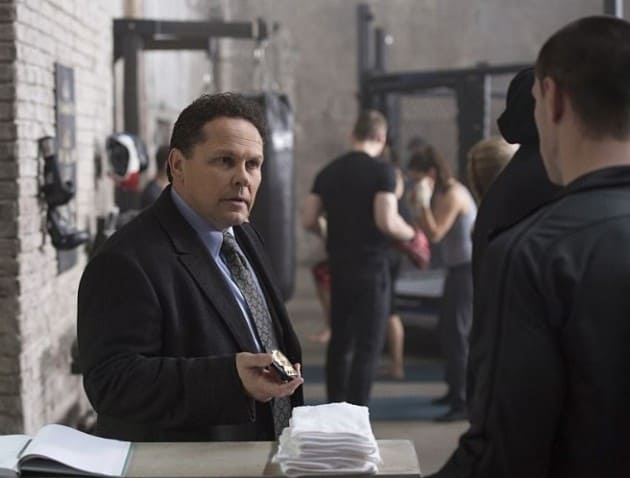 Person Of Interest had some interesting parallels tonight. We were reintroduced to Claire, the girl Harold tried to stop from joining Samaritan. Her change of heart wasn’t surprising; pretty much everyone except Greer and Martine have taken a look into the core of Samaritan and seen only terror. So, it wasn’t surprising that she was back.

But, of course, she turned out to be a double agent. So, add her to the list.

What I really wanted to focus on, though, is how similar she is to Root. They’re both brilliant, and attractive, and most importantly, they both are alone. Claire has nobody, just as Root did, and she turned to violence and power to control the crappiness of the world, just as Root did. She went to a powerful being to help stop the horrific things that happened every day, just at Root did. They both kidnapped Harold, tried to turn him into an asset, and they failed: Root became a member of the team, and Claire is starting to have doubts. The only difference between Root and Claire is time.

To me, that signals that the show is going for more depth and complexity than most shows would. Samaritan is the bad guy, according to the show, but is he really? He’s overpowered (I’m saying he for simplicity; I’ll be referring to The Machine as she), violently ambitious, and a child emotionally, but his goal is the same as The Machine. They both want the world to chill, and they both want to fix things, but their methods are different. But which one is more effective? The charter school is working effectively to educate kids and put them in better positions to succeed. Samaritan has the benefit of being in total control, with no oversight, and therefore can create solutions with no interference. But the cost of that is so high. It used living subjects to learn about human behavior, and it has killed those who attempts to pull the cord. But so did The Machine. She went through 40-odd iterations before Harold realized it couldn’t be done; the only way The Machine could exist would be if he crippled it.

We’re seeing the alternate universe version of the show playing out with Samaritan and his team; Harold is Greer, Martine is Shaw, Claire is Root. What’s interesting is that Reese doesn’t really have an alter-ego. He couldn’t exist in this universe; Greer never would’ve taken a chance on a man who was so broken. I think that the alternate universe-ness of this allows us to see these characters more clearly, and gives a really cool perspective.

The other half of tonight’s story dealt with Reese and a new number. It was an alright plot, and the MMA fighter was a neat twist, but I wasn’t super into it. It was perfunctory and fun and whatever, but it really just served as a way to pad an episode to get it to the appropriate running time. Usually, I’m cool with that, because that’s just part of the job, but I think that they could’ve found a more interesting story to go with. It was weird and hokey in some places, like Reese asking why she told her superiors about the suicide guy. First of all, Reese only asks that because some network exec thinks the audience is dumb, and her answer is more of the same. Is it really that implausible that someone finds out that her work inadvertently led to the death of another and then wants to stop it from happening again? I mean, that’s not Mother Teresa stuff; that’s just regular people stuff.

Root came back this episode and rescued Harold, and I had legit heart-eyes. Root is my favorite TV character on right now (Sam Winchester is the second, Kim Wexler is the third, Claire Beauchamp is the fourth [I know ya’ll were curious]), so every time she comes up on screen I’m excited.

That’s all I got, folks. Still not sold on the return of Sameen Shaw, still worried about Root’s future on the show, but I’m willing to go along for the ride.

– I don’t like charter schools, because of lack of oversight. But that isn’t a problem with Samaritan, so whatever. Charter schools are almost always corrupt, though.

– Greer has not aged well.

– Wouldn’t bug me if they brought back tonight’s number as a permanent addition. She was cool.