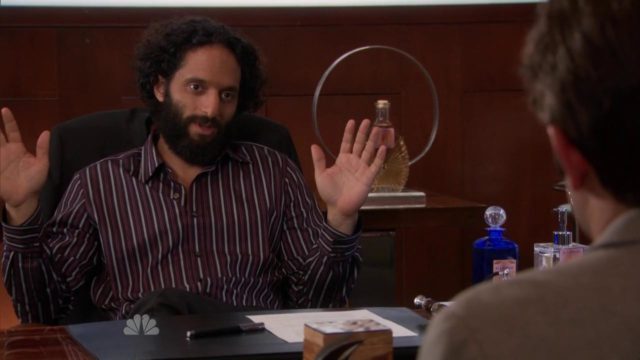 If there’s one actor who makes every single scene better in every show he’s ever on, it’s Jason Mantzoukas.  He’s the guy who killed it on The League as Raffi.  He’s the guy that’s killing it on Brooklyn Nine Nine as Pimento.   He’s the guy who nailed his role as a fragrance millionaire on Parks and Recreation.   He’s also a guy that’s been in his fair share of movies and steals the show every single time he appears.  I think Mantzoukas is THE perfect supplement actor.  Too much of this guy would definitely be overkill but at the right doses he’s absolutely perfect.

Let’s get back to his time on Parks and Recreation.  Looking back on this blooper now, it’s pretty awesome to see all four of these guys in the same room:  Jason Mantzoukas, Adam Scott, Aziz Ansari, and Chris Pratt.   Adam Scott is tasked with having to say his line while all the guys are calling dibs on their own colognes.   Once Mantzoukas chimes in with his explanation on what the cologne “Insert” is, the guys just can’t hold it in.

I don’t think I’ve ever heard Aziz Ansari laugh like that before.  I can’t even imagine how much fun these guys must have had on that show.