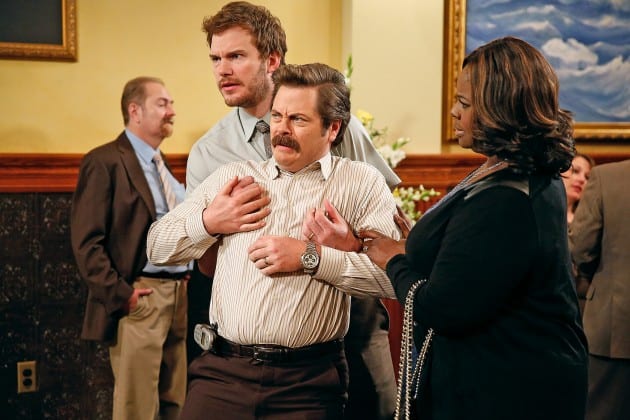 Although I’ve loved pretty much every second of Parks and Recreation‘s final season up until this point (seriously, this is about as flawless of a final season as you will see on TV), I have to admit that last night’s episodes were a mixed bag for me. The second of two half-hours, “Two Funerals,” was Parks and Rec at its best, as the show delivered nonstop jokes (Bobby thinking Buzz Aldrin is actually Buzz Lightyear), fantastic big moments (Tom proposing to Lucy and Garry becoming mayor), and one memorable cameo after another (including Bill Murray!). However, last night’s first episode, “The Johnny Karate Super Awesome Musical Explosion Show,” didn’t work for me as much as I wanted it to; I appreciated its inventiveness more than I actually enjoyed.

“Johnny Karate,” which spent virtually all of its running time as an episode of Andy’s show, did its best to be fun (and was fun a lot of the time) and was a great showcase episode for the comedic talents of Chris Pratt, but for much of the episode, until Andy and April’s terrific conversation (which showed just how great the two of them are together), it almost felt like it was a little too much, a little too self-indulgent. Andy’s one of my favorite characters on Parks and Recreation, but did I need an entire episode dedicated to the many characters he created? Probably not, even though I’ll admit that I thoroughly enjoyed everything involving Burt Macklin.

Still, though, as I hinted at before, the episode led to a great payoff with Andy assuring April that he could do anything with her by his side, and that she was the one thing in his life that he would put above all else. April’s concern for making Andy leave Pawnee and his quick reassurance of why it’s no big deal to him proves yet again why the two are one of TV’s best couples; there’s an honesty and compassion in their interactions with one another that feels so genuine. Even when their characters’ defining traits (April hating everything; Andy being a dumb but loving fool) are played up to almost caricature levels, their interactions keep each other grounded in reality.

And if “Johnny Karate” was Parks and Recreation‘s love letter to Andy, then “Two Funerals” was its tribute to Garry/Jerry/Larry/Terry, as he was given his most important role yet by Ben: Mayor of Pawnee (for two months). That’s right, Garry Gergich is Pawnee’s newest mayor, and everyone coming together for him at the end of last night’s episode, with Leslie ensuring that a giant banner was made just for him, was a sweet and fun way to honor a character that has been the punching bag of so many of Parks and Rec‘s jokes over the years.

However, as great as Garry becoming mayor was, the road to get him there was just as much fun, as it allowed for cameo after cameo in “Two Funerals.” Not only did the likes of Joan, Perd, Jean-Ralphio, Mona-Lisa, The Douche, and Dr. Saperstein all show up, but we also had Paul Rudd reprising his role as Bobby Newport, Sam Elliott appearing as Eagleton Ron, and, of course, Bill Freaking Murray as the late Mayor Gunderson. There were so many amazing cameos throughout the episode that my notes ceased being anything but just a giant list of all the familiar faces.

But that’s not all that “Two Funerals” was, as with the end of Mayor Gunderson (who, by the way, had been sleeping with Ethel for the better part of five decades–he and his wife had an open marriage), we were also given a new beginning in the form of Tom’s proposal to Lucy. Similar to how Garry’s appointment as mayor was a nice little reversal for his character, it was also wonderful to see Tom realize that because of how well he knew Lucy and how much he cared about her, he didn’t need any fancy, over-the-top productions to have her say yes–all he needed to do was be himself. His proposal was Tom at his most honest and thoughtful, and Aziz Ansari, who doesn’t get enough credit for his work on Parks and Rec, played the scene incredibly well.

With only one week remaining for Parks and Recreation, I’m finding it harder and harder to say farewell to my favorite characters in Pawnee. However, if next week’s hour-long series finale (which will air after The Voice at 10 p.m.) is anything like the episodes we’ve been given this season, Parks and Rec will have provided fans with one of the greatest goodbyes in TV history.

– As Ron Swanson reminded us last night, remember that crying is only acceptable at funerals and the Grand Canyon. Side note: can we get a spin-off of just Ron getting his hair cut by Typhoon? That scene between the two of them was not nearly long enough for me.

– Also, how great was Ron still not tipping Salvatore at his own funeral. Not even death will not compromise Ron Swanson’s beliefs.

– Ben’s excitement over getting knighted, including him mumbling phrases from Game of Thrones, was the best thing ever. It was nice to bring back Sir Edgar “Eddie” Coverton for that.

– But Bill Murray, you guys. Don’t think I’ll ever be over how great that was.

– Those commercials during “Johnny Karate” were really well-done. For the first couple seconds, I actually thought some of them were real.

– Eagleton Ron never gets his hair cut. It reaches its natural endpoint, and then just sheds, because of course it does. Side note: it was so entertaining going from watching Sam Elliott here on Parks and Rec and then in Justified about an hour later, where he’s playing this season’s major villain.

– “Without you, I wouldn’t be anything.”

What did you think of last night’s episodes of Parks and Recreation? Are you emotionally prepared for next week’s series finale?