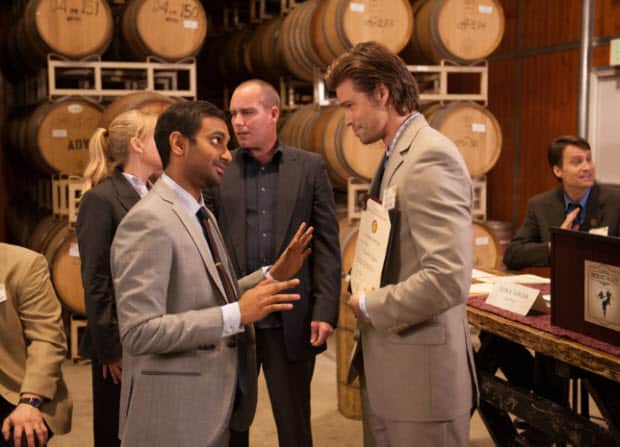 This has been an uneven season for Parks and Recreation, probably the least consistent since the show’s abysmal first season, but thankfully, the show’s recent stretch of episodes have really reaffirmed why this series, despite its age, is still one of the best comedies on television. Last night’s episode, “Flu Season 2” (a sort of sequel to season three’s “Flu Season”) paired interesting groups of characters together (Ron and Ben, Leslie and Andy, and April, Tom, and Donna) and focused on the show’s ongoing plots: Tom’s attempt to open his own restaurant and the planning of Pawnee’s Unity Concert. The unique character dynamics, hilarious one-liners, and the not so surprising but very welcomed twist that Leslie is pregnant all ensured that “Flu Season 2” continued Parks and Recreation‘s streak of stellar episodes and was, in its own right, easily one of the best episodes of this season.

The key to success for “Flu Season 2” is in the way it divides its screen time. There’s no real main storyline, and each character (or group of characters) has their own story reach fruition in a funny or satisfying way. Sillier, funny plots like April’s desire to make fun of all the pretentious people at the wine testing don’t take away from the more central conflicts, like Leslie’s discovery that she is pregnant or Ben’s realization that he wants children. The Parks and Recreation writers ensure that no minute is wasted and that no character (not even the boisterous, sometimes irritating Craig) detracts from the importance of this episode, which will be remembered as the beginning of the next, new phase of Ben and Leslie’s relationship.

And speaking of Ben and Leslie, the timing of all this feels just right, doesn’t it? With season seven looming and possibly being the last we will ever see of the Parks and Recreation gang and also with the show dropping hints at its possible conclusion (Ann giving birth and leaving Pawnee and Leslie being offered a better position in Chicago), it makes sense now that the writers would want to give Ben and Leslie the opportunity to start a family.

Ultimately, family has always been the most important thing to Leslie, even if she has looked at it through the scope of government. Anytime Leslie has struggled or fought to achieve something it has always been for someone she has loved, or it has been for Pawnee, the town that she loves, the place that she believes in more than anything else. For Leslie, Pawnee has always been her truest family, even when its citizens have refuted, rejected, and even recalled her. From the very beginning of Parks and Recreation, through Leslie’s dedication to public works, the series has shown us her maternal instincts, how deeply she cares and hard she works to ensure the best for something or someone she loves.

Now, instead of being a mother to Pawnee through the parks department or city council, Leslie will be able to be an actual mother to her own child, with Ben (who is just going to be the best dad in the world by the way) standing beside her. Let’s just hope their kid is better behaved than the townspeople of Pawnee.

– Thanks again to Blaise for filling in for me last week. I thought he did an awesome job reviewing the show.

– NBC kind of ruined the surprise of Leslie’s pregnancy with their promos for this episode.

– Tom hiring Craig as his sommelier would indicate that there’s a lot more Craig to come on Parks and Recreation. I hope the writers know to use him sparingly. He’s funny, but only in small doses.

– Sam Elliott returning as Eagleton Ron was pure brilliance. Ron’s initial reaction to him was great, and all of Eagleton Ron’s interactions with Ben were fantastic. “Dude, are you a ghost?” “Am I?”

– I’m a huge country music fan, so I thought all of the Chip McCapp jokes were a little played out, but hey, they still made me laugh a little bit.

– Karate is first aid if you do it right–life lessons from Andy Dwyer.

– “ I just want to thank all the people who got me here: Norbit, Pluto Nash, all the Klumps…”

– “Same way I got a perfect score on the SATs: broken Scantron machine.”

– “But you are a terrible person to discuss personal problems with.” “Thank you, friend. That means a lot to me.”

What did everyone else think of last night’s episode of Parks and Recreation? Are you excited about Leslie’s pregnancy, and were you surprised by it?