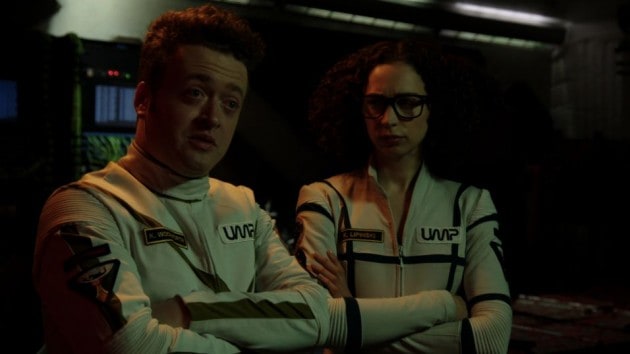 I don’t think it’s intentional, but “Powerless” very much feels like Other Space doing an imitation of NBC’s failed event drama, Revolution. Think about it: people go scrambling to maintain power structures and control when electricity disappears, slowly falling victim to the darkest instincts of man in the absence of artificial light. And just like the recent drama from the Peacock, “Powerless” doesn’t do a whole lot with this idea, playing down to simple story where Tina gets weird and violent again, and Karen and Stewart both try to maintain control of an unexpected situation.

There’s just not a lot to “Powerless”; what character development may exist is only hinted towards, the most satisfying moments relegated to plot points tacked onto the final minutes of the episode. In a way, the neat split between Stewart and Karen’s story works against itself; instead of providing parallel avenues for stories to thrive, or combining them into one narrative, “Powerless” ends up contrasting stories of Stewart learning how to guide the ship (quite literally, navigating it with a steering wheel) and Karen losing control of Michael, A.R.T., and Tina’s power usage (which is drawing static electricity towards the ship). It ultimately makes them feel like stories competing for thumb-twiddling screen time, rather than ones attempting explore a more interesting, meaningful conflict, like one where the siblings found their inherent ability to compromise had no effect on an increasingly unstable set of ship members, leading to the usual weekly hijinks “Powerless” still tries to employ.

“Powerless” goes in another direction, however, and instead of those two stories working together, each one ends up undercutting the other, leaving both focal points of the episode feeling a little underrepresented. Stewart’s decision to head towards the ripple is a definitive one for his character; tacked onto the end of the episode, it feels undersold playing as a moment of regret and reflection, where the decision could instead be used in any number of stronger, more resonant moments. Even just a little more depth to Stewart’s obsession with being a ship captain would help give those final moments some more life; with only 15 or so seconds depicted of Stewart’s conflict about heading back being shown, it doesn’t give a whole lot of weight to his decision between continuing to explore the cosmos (his dream, something that’s made viable when the lighting storm dissipates) and keeping the crew safe and trying to bring them home (which, as a captain, is his mission).

Despite that, “Powerless” is still able to muster up some fun moments, even though they exist in sort of a vacuum, suspended in an episode that feels untethered from the rest of the season to this point. Kent’s sheepishly admitting to Natasha that she has feelings (how Other Space handles her reaction, however, is… odd, to say the least), Karen wearing glasses, Tina not speaking English; all of these moments make for fun jokes and scenes, but the lack of meaningful context ends up making “Powerless” feel out of place next to the other episodes, which have offered similarly wacky (though more creative) space dilemmas, but anchored them down with a much more fully realized exploration of character emotions and motivations. The latter of these is pretty obvious throughout, but it’s the mishandling of the former, the lack of an emotional component (beyond Kent’s admission of love, which happens while Natasha is in an infantile state) in the main two stories, that makes “Powerless” feel a little… well, dimmer than the previous, much more lively half hours preceding it.