Home
Television
Other Space
Other Space Season 1 Episode 3 Review: “The Death of A.R.T.” 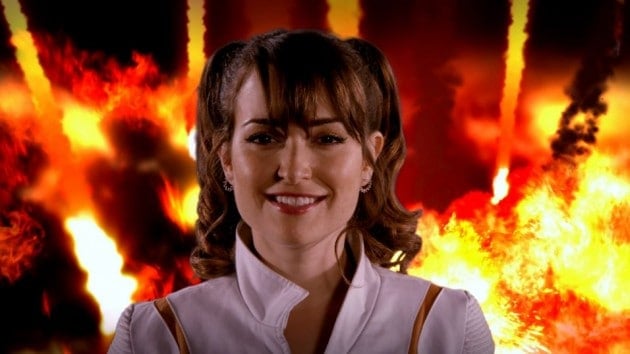 There’s an interesting nugget of an idea hidden within “The Death of A.R.T.,” which observes the crew of the Cruiser trying to create their first outgoing message to the universe, all while dealing with the loss of A.R.T., thrown into space when Karen accidentally kicks him off the edge of the ship into the storm of a planet forming around them. The story of Other Space‘s third offering is a mouthful, yes, but its pathos is quite simple: “The Death of A.R.T.” is about self-definition, and how that presentation of self can be lost in translation, be it to other species, or even just other human beings.

Of course, the show’s done this already, with everyone from Stewart and Kent, right down to A.R.T. himself, a cheap-looking robot that houses one of the greatest, most successful scientific minds in the universe. Trying to put together an all-encompassing message to the unknown entities of this strange universe provides a great window for the show to explore these dichotomies: Karen’s extreme confidence in her decisions is driven by her insecurity and need to keep people at a distance (though she does cry over a robot, a fantastic bit of irony), just as Kent’s empathetic nature comes from the fact that he’s actually a walking, talking organ farm, and actually lacks any kind of real human understanding (but he’s learning; at one point, he does offer Stewart the moist saline compound he uses on his gills). Even Natasha the A.I. has shades of this; her ‘snark button’ is a wonderful way to introduce this idea of self-presentation, and how others perceive us is something that’s always out of our control, no matter how hard we try to present a certain identity (that being said, I’m not messing with Tina).

More importantly, presenting and exploring these contradictions, even if “Death” doesn’t have any definitive answers for who anybody really is, gives some weight to what is essentially a “work out the kinks” episode, a common tactic by a collection of writers testing the waters of what works and doesn’t work with its characters and story. Unsurprisingly, it all fits together naturally: Other Space is equally capable of making a character like Michael a simplistic punchline, or a genuinely empathetic, complex human being , and that skill enriches a lot of goofy, low-key storytelling, turning moments like Karen’s sadness over losing A.R.T. (whose coldness is something she can relate to) into meaningful, emotional scenes viewers are invested in – no small accomplishment for a show that’s barely an hour into its story.

Plus, “Death” is great at just being hilarious: from Tina threatening the “green d*** s***heads” in space, to Kent’s exclamation of “if it puckers, lube it!” when they think the world is ending, Other Space has clearly established its comedic rhythms, and now can focus on building story and character growth, rather than continue to try and develop a rapport between characters (and the audience, for that matter). “The Death of A.R.T.” does so effortlessly, letting its deeper ideas about companionship and family organically grow from its premises. For a show that takes place in the sterilized, white-dominated locations of a futuristic spaceship, Other Space is already quite a vibrant comedy, one that’s only gotten sharper through its first three episodes.