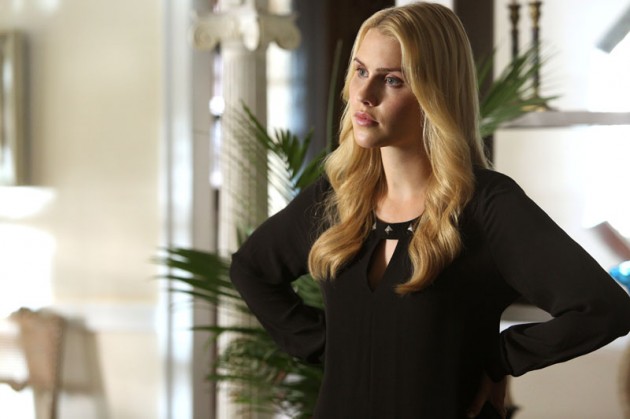 The last time Klaus was in a holiday themed episode of The Vampire Diaries he left a grand total of 13 bodies in his wake.  The Originals was a little less bloody last night, but still all around awesome for its midseason finale.

All of the scenes at the safe house were perfect.  Hayley and Klaus’ reunion with Hope was too cute.  The banter between Hayley and Klaus about who gets to hold the baby felt so naturally funny.  So many good quotes came from this episode, but one of my favorites has to be when Klaus handed Hope over to her mother in order to participate in an old Mikaelson family tradition:  “I wish you would tell Elijah you’re marrying your werewolf suitor.  At which point I will pour him a scotch and congratulate him on the bullet he dodged.”  I just love that Klaus and Hayley are able to make digs at each other like that now.

In turn, Hayley’s wish for Elijah was that he understand her bad news.  Her choice of words as she told Elijah that she’s marrying Jackson (straight up saying she doesn’t love Jackson) was a dead giveaway of her true feelings.  The scene that followed will now be remembered as the hottest Haylijah moment yet.

Before they tore each other’s clothes off though, Elijah and Hayley talked about how this marriage to help the wolves would actually be the best thing for Hope.  With the wolves free of the witches, and Elijah controlling the vampires, their plan is to make New Orleans safe for Hope to return home with her whole family.  After everything that went down, I have to wonder where this leaves Hope.  On top of waking up in a mortal witch’s body, Rebekah also happens to be locked inside a mansion that Klaus had cursed a century ago to spite Kol.  That leaves Hope without her Auntie Bex to take care of her.  With no one else to trust, Klaus and Hayley will definitely have to bring their baby home.  It’s the last place she would be safe but I don’t see any other option.

Esther could go either way as an ally or villain.  As viewers we know that she only has her children’s best interests at heart by trying to protect them all from her more evil sister.  All of the Mikaelson siblings are aware of their “fabled” Aunt Dahlia yet they don’t fear her.  Now that they’ve turned their own mother into a vampire, she has the choice to complete the transition or die.  If she completes the transition, she could use her knowledge to help defend her kids if and when Dahlia comes for Hope.  There’s an even greater chance that Klaus and Rebekah just turned their mother against them for good.  If they thought she was evil before, I’d hate to see them on her bad side now.  She still has witches as powerful as Finn on her side at least.

Speaking of Finn/Vincent, he’s on the loose after threatening Cami when all she wanted was his help in stopping his mother from using her as a body for Rebekah.  Really though, was a coffin the best place to keep an ex-vampire/current witch hostage?  Probably the most unoriginal idea Klaus and Marcel could’ve possibly had when scrambling to figure out whatever the hell was going on with Esther’s plans for their dear Cami.

Mikael was only briefly seen in the beginning of the episode when Esther found him slaughtering innocent werewolves.  She stopped this nonsense when she told him the wolf he was really looking for (Ansel) was already dead.  Her remarking on Mikael’s consistency for “resolution through violence” was exactly what I was thinking.  Like father, like son!  Klaus may not be Mikael’s biological son but in this case he’s exactly like him.

Last but not least, Kol and Davina continue to be both annoying and adorable.  On the surface, their chemistry is undeniable.  It’s their secret plotting that really bothers me the most.  From what I gather, Kol’s always been left out of the holy trinity of Mikaelson siblings: Klaus, Elijah, and Rebekah.  He’s bitter about that now, which would explain why he wants this diamond that could produce a weapon strong enough to kill Klaus if the need arises.  Marcel is stupid to trust Kol that he’s only doing this as a precaution.  Why Davina still holds a grudge against Klaus is beyond me.  Maybe she’s distracted by Kol/Kaleb’s accent and face in general, because she can’t be hung up on her revenge for Klaus killing her friend last year.  I find that to be a weak excuse if it is truly her driving force to help Kol on his mission.

Overall it was a pretty crazy episode.  So much so that I had to rewatch it today because it was so fast paced around that high stakes spell that I had no idea what was happening last night.  There’s some things that I don’t agree with (for example, actually going through with the spell that transferred Rebekah into a new body) but nothing is ever permanent on this show.  Rebekah’s “original” body will be kept safe for the future whenever Claire Holt is available to return.  Hopefully sooner rather than later, but hey, I’ll take whatever the writers choose to give us.  They haven’t let me down this far yet.

What did you think of the winter finale?