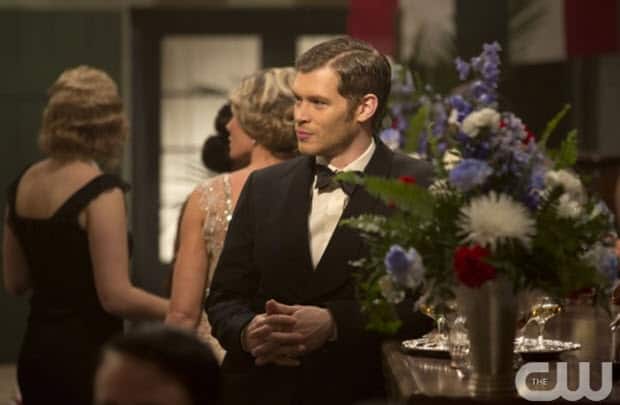 Last week on The Originals we were left with the shocking reveal that Sabine is actually Celeste, a witch with a personal tie to Elijah and whom many believed to have been dead for centuries.  We only discovered this as she was reigning in the flowing powers from Davina’s death that completed the Harvest, and instead of allowing the Reaping to continue as planned, she raised 4 other witches from their graves.

One of those witches was the villain of this episode, a very creepy warlock named Papa Tunde.  Through a series of flashbacks to the 1920s we learned of his connection to the Mikaelson family.  He practices sacrificial magic by effectively drawing the powers of animals, witches, vampires, werewolves, and even humans when he kills them in an elaborate fashion involving carving a symbol into their foreheads and setting the body up in the middle of his signature marking.  On the surface it seems like he’s only there to exact revenge on Klaus for killing his sons and then himself, but things are never as easy as they seem with this show.  Celeste clearly brought these 4 specific witches back from the dead, because they probably all have a past with the Originals.  So far we saw the rise (and fall) of Papa Tunde, which leads me to wonder if each of the other resurrected witches will get their own episodes.  Now that everyone is suspicious that somehow the magic that was released from Davina was hijacked by someone else, maybe they’ll catch on sooner rather than later that Celeste is behind all of this.

My favorite relationship to watch each week is the forbidden attraction between Elijah and Hayley.  We got more than a few scenes of them together this episode, as they even saved Rebekah from Papa Tunde.  In order to be able to free her from the protective spell Tunde had placed around each of his sacrifices, Elijah needed witch blood, and as Hayley pointed out, her baby is a quarter witch.  I’ve seen some debates about this wording on the internet already, whether she meant the baby is one-fourth a witch (paternal grandmother, Esther) or if she meant a Quarter witch, one that would grow to share in the same powers as the other witches in the French Quarter.  I would hope that’s not the case, but it would be interesting to see an explanation as to how a vampire-werewolf hybrid and a werewolf’s offspring would turn out to be a witch.

Anyway, Elijah ever so politely asked Hayley if she would mind giving some of her blood, and she offered up her wrist in what was probably the hottest scene they’ve had yet.  I’m usually freaked out by too many blood scenes in all the vampire shows I watch, but this was something special.  Once Rebekah was freed, Elijah confronted her again to find out why she’s trying to undermine Klaus by working behind everyone’s backs.  She makes a questionable point when she turns right back around to accuse Elijah that his unnatural feelings towards the woman carrying his brother’s baby could do more damage to the family than anything she would ever do.  I get what she means, that Klaus has a hot temper and if Elijah pursues anything with Hayley, it’s almost certain that Klaus will react harshly.  On the other hand, once the baby is born and Klaus starts to focus more on the protection and wellbeing of his daughter, he won’t care about Hayley at all.  I’m even willing to bet that if Hayley does anything more to instigate Klaus while she’s still pregnant, he could lash out and kill her the moment the baby is born or any time after.  I think that’s when Elijah would step in and really fight to defend and protect Hayley, thereby drawing a line in their newly refreshed family dynamics, but even then it would be Klaus’ fault — not Elijah’s.

Through flashbacks to the 1920s when Papa Tunde first arrived and Marcel was returning home from war, we learned an even more devious secret about Marcel.  A few episodes ago when Marcel had to break off his relationship with Rebekah because Klaus was now the leader, Rebekah warned Marcel that she knows something about him that would make Klaus turn on him.  Seeing that Marcel admitted to being responsible for bringing Papa Tunde to New Orleans in hopes of scaring Klaus off so that Rebekah would be free of him was interesting.  Like Rebekah, I was also shocked that he would attempt such a thing, but also intrigued to see how much Marcel and Rebekah probably always have meant to each other.  When Rebekah told Marcel that the only person Klaus has ever been afraid of is her father, Mikael, they started to conspire about how to find him.  They said they’ll need a powerful witch to help them, which probably leads us to next week’s resurrected witch’s story.

It’s also important to note that Klaus was in an uncharacteristically good mood before all this Papa Tunde drama was stirred up.  I laughed at Marcel’s comment that Klaus should visit Mystic Falls more often, because we all know what (or should I say who) made him so happy there.  By the end of the episode, Klaus was back to his normal self.  He addressed his vampire followers to either leave New Orleans or agree to side with him in future fights.  Thierry was one of a handful of vampires to leave, which makes me wonder if we’ll see more of him or if he’s really leaving town without a fight.  Rebekah had kept him nourished in the garden wall where Marcel had him prisoner, in the hopes that he would side with her in the future.  He ran away the second Pape Tunde touched Rebekah and desiccated her on the spot, without even telling anyone what happened.  Sad to say, but I think Rebekah has to pick her partners more wisely next time.  So far she’s down to just Sophie on her side, with Davina still dead and Thierry presumably fleeing town.

With so much going on now in New Orleans, it’s anyone’s guess as to what happens next.  Celeste is up to no good now that we’ve seen even Papa Tunde complete his work for her by sacrificing himself in the end.  She now possesses the power of hundreds of vampires that Tunde collected for her, and she must have her own revenge agenda.