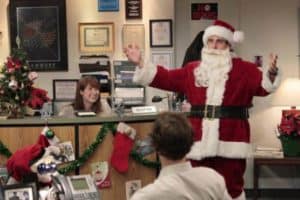 It’s Christmas time, and that means it’s time for Holly (Amy Ryan). Yes this joke is terrible, but it’s exactly the kind of lame humor that bonds Michael (Steve Carell) to Ms. Flax. It’s always painfully endearing to watch them stumble around each other with their awful impressions and over-the-top mimicry, but we love it because it reminds us that perhaps there really is someone meant for each us no matter how odd or pathetic we are.

We know that eventually they must end up together yet it’s still painful to watch as Michael’s immaturity and Holly’s overly rational mind keep them apart. And no matter how ridiculous or self-delusional, Michael’s efforts to win her back continue to be touching because we also know that in this one situation he’s actually the one who’s right.

It’s difficult to keep up the momentum in hour-long episodes, and while 7.11 wasn’t as classic a holiday episode as we’ve seen in the past, it had it’s truly memorable moments such as the snowball terror inflicted upon Jim (John Krasinski). Nothing was funnier than watching Jim’s certainty and confidence completely unravel into total paranoia. And while we expected him to finally have his revenge on Dwight (Rainn Wilson), it never happened and the episode was far better for it. The final scene with the army of snowmen had me laughing out loud.

The Darryl (Craig Robinson) subplot with his daughter should have been a lot funnier than it was and surprisingly dragged the rest of the show down a bit. And while I liked Angela’s (Angela Kinsey) attempts at self-importance with her new gay State Senator, it seemed like another throw in with not too many payoffs.

So what else worked? Ryan’s (B.J. Novak) literary criticism of Pam’s (Jenna Fischer) Bearman comic was a highlight, as was Andy’s (Ed Helms) terrible Grinch impression (complete with topical political questions). Some of the funniest moments of the night came from Kevin (Brian Baumgartner) as well as Dwight’s wigs. I also loved Erin’s (Ellie Kemper) flawed impression of Holly born from her protective nature of her father figure Michael.

All in all a fairly even episode, with as many hits as misses. Best of all, it looks like Holly will be around for at least another episode…so watch out for the Huggy Monster.