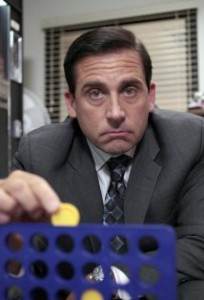 So who else is on the waiting list to send their kids to Dwight’s (Rainn Wilson) day care center?

This is an episode I think most fans have been waiting for. A battle of the half-wits between Michael (Steve Carrell) and Toby (Paul Lieberstein) that also included a riveting game of Connect Four. Michal took the early upper hand with his fictitious storytelling (ALF for the win) but Toby quickly turned the tables by getting Michael to open up while playing board games and cards.

Not only only were these scenes funny, but they gave us some additional insight into Michael, even if they were fairly obvious (“It’s important for you to be liked, isn’t it Michael?”). One wonders if this will be part of the arc for Carrell’s last season: finally getting to see deeper inside the root of Michael’s insecurities. After all, we’ve been watching them manifest for seven seasons now. It would be nice to see his character exit with some degree of healing.

Dwight’s transformation into Pretty Woman was also worth a few good laughs, especially when the office staff gave their critiques and Dwight smashed his glasses. Watching Dwight inappropriately stumble over his “Thank-you’s” and “You’re welcomes” had some good payoffs. Even Angela (Angela Kinsey) got to cash in on one of her nookie allotments.

The idea that someone could just create their own position and then have it approved by corporate was funnier than its execution, but Pam’s (Jenna Fischer) scene with Gabe (Zach Woods) was also worth the payoff.

The Office is at its best when its not just going for laughs. Finding its characters’ vulnerabilities and then pushing past them is what makes for stellar episodes. This season will have a lot to answer for if NBC expects viewers to come back after Carrell is gone. Viewers will have to see that the other characters on the show can carry their own, and that means giving them deep buttons to push. We come back to The Office each week because we want to cringe along with everyone at Dunder Mifflin, but we also want each cast member to find their own version of wacked out happiness. Let’s hope Michael is on his way.