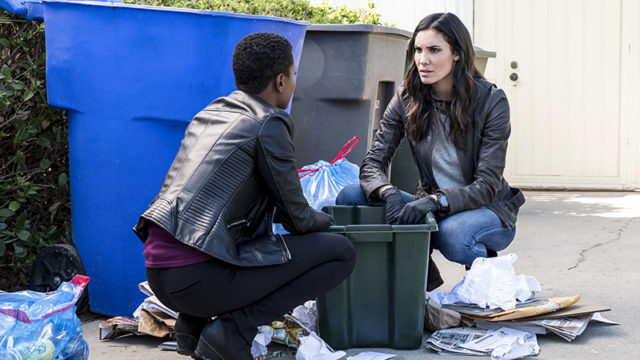 NCIS: Los Angeles‘s first episode of 2018 did nothing to make me hopeful for the rest of its ninth season, and that’s a real disappointment. Mosley is crankier than usual, which discourages her team from inviting her to join them for a drink at the end of the case. Also, Deeks is absent for most of the episode on some mandatory active shooter course for the LAPD. Add to that the fact that no one has yet realized that Hetty is in danger, and we were given more reason to care about the guest stars than the agents on the case, and there wasn’t a lot to root for. I’m hoping that once Hetty returns to NCIS that that will change, but I’m not optimistic.

Case in point: the person I felt most attached to in this winter premiere was the case’s victim, an innocent high school girl named Amanda. A supply of Napalm is stolen from a secure bunker near Camp Pendleton. The incinerated motorcycle next to its charred corpse is registered to Zack Fuller. Mild-mannered fish tank cleaner by day, rogue environmental radical by night, Zack Fuller chose an innocent person’s issues to inspire his statement. He befriended a young high school student named Amanda who was mercilessly teased online. Zack thought the kids made the perfect target for his grand scheme. It made a sick sense in his mind to use a 1920’s oil well which opened up by Amanda’s house to pour napalm and a rocket down it and teach the community a lesson. In his mind, Amanda wouldn’t be hurt, and he’d be able to make a radical statement about the environment. Allow me to point out the obvious and say that if you are a real environmentalist, you don’t create explosions and fires that only add more toxic fumes to the environment.

Ironically, Amanda’s mother is a paramedic who works with the Los Angeles Fire Department. Amanda is an innocent in all of this. She is used as a pawn by a guy who pretends to like her in order to gain access to the well. After Zack dies, his partners, operating out of a solar panel company, intend to carry out the plan. Unfortunately, Amanda is kidnapped in the process. Hidoko and Kensi make a pretty good team as they douse the remaining radicals in cement in order to stop the rocket in its tracks. In addition to saving the city from going up in flames, NCIS can get a chance to tell Amanda that things get better. She won’t be bullied and used forever. They all went through their fair share of torment, verbal and otherwise, and lived to find happiness.

This is what I mean about being more attached to the victim than to the agents. There is no doubt that the team was going to be in a no-win situation after the death of Owen Granger. There is just no way of putting a team back to the way it was when it has lost a family member. Hetty taking a sabbatical (because let’s call it what it is) and giving her job to Mosley was a big mistake. Hidoko is finding her comfort on the team, and I see the sense in pairing her with different members. Not only does it help her adjust more quickly to the group dynamics, it makes long-term sense if Kensi and Deeks can no longer be partners after they are married. However much Mosley helps, and she has proven herself to be quite capable and resourceful, it has been several months and she is still not a character I am attached to.

What are some things NCIS: Los Angeles should be planning for in 2018?

The first NCIS: Los Angeles of 2018 sets the wrong tone for the new year.