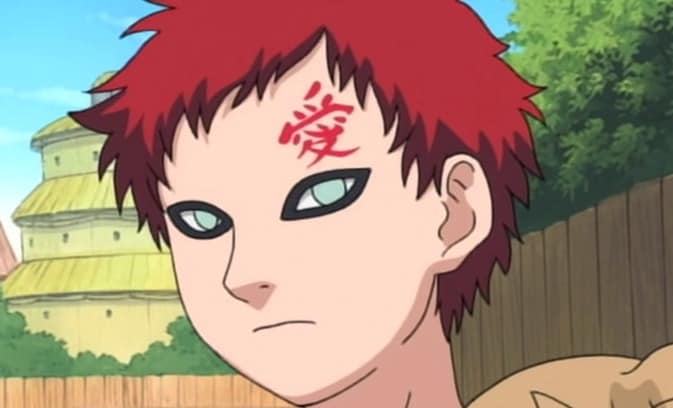 Gaara is one of the more memorable characters from the Naruto series. In part, this is because he has a very striking appearance, with includes red hair, black rings centered on his eyes that make him look like a tanuki, and the kanji for “love” tattooed on his forehead. However, Gaara is also notable in that he was a dark mirror of how Naruto could have turned out but nonetheless managed to take a turn for the better. Here are 10 things that you may or may not have known about Gaara from Naruto:

1. Son of the Fourth Kazekage

Family-wise, Gaara is the son of a man named Rasa and a woman named Karura. Rasa is the Fourth Kazekage, meaning that he is the leader of Sunagakure. This is one of the parallels between Gaara and Naruto because Naruto’s father is the Fourth Hokage of Konohagakure, though confirmation of Naruto’s parentage wasn’t provided until much later.

2. Was Made a Jinchuriki Because of Economic Pressures

Background-wise, Sunagakure came under serious economic pressure because the ruler of the Land of Wind preferred using Konohagakure’s services rather than its services. As a result, Rasa became fearful that Sunagakure would be wiped out, which is why he chose to make one of his children a jinchuriki, thus producing an ultimate weapon for his village. Gaara’s two siblings were incompatible, which is why he was the one used to imprison a Tailed Beast when he was still in the womb.

Gaara was used to host the One-Tail, which is a tanuki named Shukaku with the power to manipulate sand on a strategic scale. Personality-wise, Shukaku is proud, bombastic, and short-tempered. However, its most notable characteristic is its murderous hatred for humans, which is perhaps unsurprising considering that most of its interactions with humans involved it being locked up by them. With that said, there have been exceptions to this particular rule when Shukaku has received better treatment.

4. His Mother Died Because of Childbirth Complications

The ritual to turn someone into a jinchuriki takes a serious toll on people. Since Gaara was turned into one when he was still in the womb, this had a negative impact on Karura, who died because of childbirth complications. However, she was able to see Gaara before she died, which instilled in her a desire to protect him as best as she could under the circumstances.

Generally speaking, people in the Naruto setting tend to be rather uncomfortable around jinchuriki, which isn’t wholly unreasonable when said individuals host country-destroying creatures that tend to be more than a little bit upset with humans. However, Gaara’s case was particularly bad because he lacked control over Shukaku, meaning that he accidentally either killed or wounded a lot of people when he was still a young child.

6. Was Deemed a Failure By His Father

The lack of control put increased pressure on Sunagakure, which caused Rasa to suspect that he had made a very, very poor choice when he turned Gaara into a jinchuriki. Eventually, this caused him to send Gaara’s caretaker Yashamaru to attack Gaara both physically and psychologically as a final test of Gaara’s control over Shukahu. Unsurprisingly, this was a complete and utter disaster, which is why Rasa started sending assassins to kill him.

7. Started Believing that He Was the Instrument of His Mother’s Vengeance

8. Had a Change of Heart Because of Naruto

Eventually, Gaara would clash with Naruto when Sunagakure teamed up with Otogakure to invade Konohagakure. Naruto was the one who came out on top, having convinced Gaara that his strength had come from his bonds with other people. Something that convinced Gaara to make a change for the better, starting with him apologizing to his siblings when they came to retrieve him. Amusingly, this change for the better caused Gaara to beat Naruto’s goal of becoming the Hokage by becoming the Kazekage well before him.

9. Has an Automatic Defense

Gaara’s most notable ability might be his Shield of Sand, which is an automatic defense that protects him whenever someone or something attacks him even if he is caught unaware. Initially, it was believed that it was a product of Shukaku’s sense of self-preservation. However, later revelations make it likelier that it was the product of his mother’s dying will, which is supported by the fact that using it doesn’t actually drain Gaara at all.

10. Has a Bunch of Side-Stories

It is interesting to note that Gaara has had a number of side-stories about him. This is unsurprising because he is one of the most popular Naruto characters, as shown by the fact that he is one of the four characters who have always managed to place in the top ten of the Naruto popularity polls.