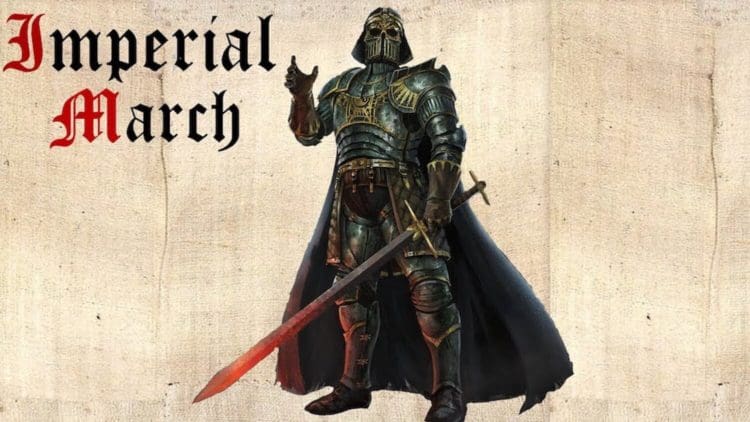 There are many different ways that music can be altered, but there are also times when the changing of said music can take the punch out of it in a big way, or add something that wasn’t there, to begin with. In the case of this medieval remix for Star Wars, it almost feels diabolical in some ways and uplifting in others, but it definitely feels extremely dated since obviously there weren’t as many musical options due to a serious lack of technology back in those days. Plus, can anyone imagine what might have happened if this type of music had been played way back in those days? There were tunes that were actually outlawed way back in medieval times, and as such it’s likely that stuff like this would have been looked at as an oddity that might not be keeping with the desired respect that music required, or with the expectations that people were looking to meet.

Somehow this just sounds so insanely wrong, and yet it sounds interesting the longer it goes on since there’s definitely something there that a person can’t deny is kind of intriguing when it comes to the various notes that go into the Imperial March. Perhaps it’s the lack of a backup to the overall tune or the lack of bass, but the march feels a little weaker when it comes to this rendition. Looking at Darth Vader’s armor in this light however is kind of interesting since it would no doubt inspire a great amount of terror, especially if his sword was able to glow red hot like this on a regular basis. Just imagine how many people would be literally shaking in their boots.

Somehow this tune gains a little more meaning using this style and it feels even stronger than it did before. So many of us want to associate with the plight of Luke Skywalker, as though we’re meant to do more with our lives and yet we’re not living up to our potential. It almost feels as though there’s something Scottish to this tune, as though one expects it to be belted out on a set of bagpipes in a haunting and entirely convincing manner that would be awesome to hear. But there’s definitely a little more feeling to this than to the original, no offense intended, though it’s definitely a bit dated in its sound.

Let’s be brutally honest, Order 66 was flat out murder that one can’t help but think that the Jedi should have seen coming. The arrival of a clone army from nowhere, the burgeoning rise of the dark side of the Force, and the continuing troubles with the Separatists all spelled doom in a certain way that the Jedi should have at least been able to guess at. Plus, leaving their temple largely unguarded and their younglings at risk. Of course, it was impossible to know that one of their own would turn on them and become their downfall, but this is a serious limitation and tactical blunder that one has to wonder about.

If ever a figure from the Star Wars galaxy posed a threat to both sides of the Force equally, it was Revan. A disgraced Jedi that fell to the dark side, but made his way back into the light, Revan was a danger to pretty much everyone, including himself. But the power that this figure wielded is felt within the music that you can hear, as is the tragedy of his story. It’s not hard to believe that the Jedi order would want to keep his story close to the vest as a cautionary tale, while the Sith would revile him and speak of how Revan was too weak to resist the lure back to the light. In any case, both sides are wrong and right at the same time, as Revan proved to be one of the strongest of either side of the Force.

It’s very easy to liken the Mandalorians to Vikings or other groups that have been known to take on the lifestyle of mercenaries since they’re reviled by many and have an issue with pretty much anyone that questions their honor, or that thinks that the Mandalorians aren’t worthy of respect. A warrior culture that takes in just about anyone that’s worth their time, the Mandalorians are those that are fully ready to throw down when it’s needed, and to fade off into the darkness and the edge of memory at any other time, content to live their own lives and protect their own culture. There’s a certain nobility in that.

One can almost feel sorry for the clones since they didn’t ask to be created, nor did they ask to be treated like another tool pulled from the shelf, which was pretty much how they were handled and how they were seen. They were a blunt instrument that was meant to offer protection and a measure of security, but in the end, were really just another plot device to be used and then discarded when their job was done.

This was an impressive display of how music can really stir up emotions concerning various characters and situations in Star Wars, and it was kind of fun.