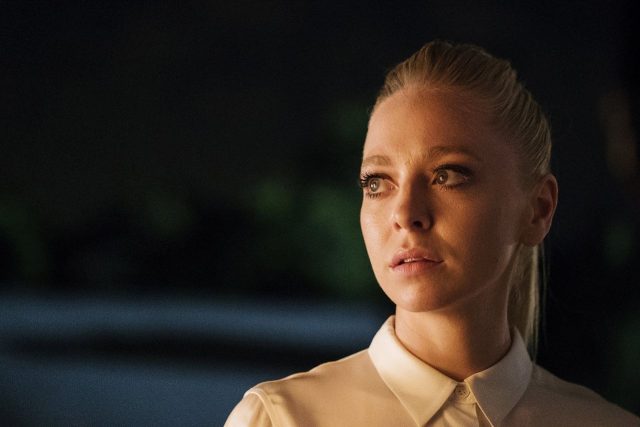 All season, TV critics like myself have lauded Mr. Robot‘s increasingly cinematic sensibilities, even as those priorities have come at the cost of useful dramatic conventions, like “plot movement” or “character development”. As the story of season two has slowly lurched forward through this season, burning through a half-dozen story lines without actually exploring them, the show’s visuals have slowly drowned out the increasingly noisy, ludicrous story of a man and a woman participating in a global pissing contest – and often, to good effect. However, with this week’s episode, “eps2.9_pyth0n-pt1.p7z”, it appears Mr. Robot has been consumed by its obsessive aesthetics, an hour of television so consumed with looking and sounding cool, it completely forgot how to be coherent or engaging in just about every way possible.

Season two of Mr. Robot is an excercise in dramatic patience: how long can an audience member wait before the repetitive cycle of ending each hour on multiple cliff hangers consumes their desire to watch the show? How many episodes featuring the lines “where’s Tyrell” or “you don’t remember?” can we stand, before it’s all revealed to be a lot of empty histrionics? With “eps2.9_pyth0n-pt1.p7z”, Mr. Robot appears to be answering these questions for me in this week’s installment, careening towards a season finale with a penultimate episode clearly dragging its feet to get to the point. After last week’s episode proved this entire season has been spent on a hamster wheel of repetitive storytelling, “eps2.9_pyth0n-pt1.p7z” reinforces the emotional emptiness that stems from such storytelling, as Elliot once again tries to figure out what is real and what’s not – and of course, Whiterose appears in the show’s most ridiculous, overrated sequence yet.

What many feign to call “Lynch-ian” miss the point: Angela’s sequence has the look and feel of a pastiche, juvenile filmmaker, adopting the stylistic choices of Lynch’s influential work, without understanding the fundamental expression occurring underneath it. Lynch’s work revels in the surreal, yes: but those twisted creative pursuits are engineered to create an emotional response, to help audiences connect to a particular image or idea, without necessarily taking the conventional route of words and images to get there. Instead, he works in the surreal and the evocative to reach the emotional subconscious of humans: having a little girl peck away at a Commodore 64 while asking Angela questions about her sexual behavior, it most certainly is not. In a lot of ways, the much-lauded sequence where Whiterose explains to Angela that using makeup to suggest child abuse is a good way to recruit new members is like a Scrubs cutaway gone wrong, a parody that takes itself way too seriously in the context of its own narrative.

And honestly, the biggest problem with the sequence isn’t the underwhelming homage to David Lynch – it’s how blindly the scene reflects the aesthetic and narrative missteps of this second season. The phrase “style over substance” is an overused one in cinematic circles, but I think it fits in perfectly here: like the 90’s sitcom homage earlier in the season, this is a stylistic choice meant more as a distraction and a tease, hinting towards possible truths and new plot directions, without actually explicitly committing to the style or its narrative hooks in a meaningful way. Both the 90’s sitcom homage and the Lynch scene here go on for a very, very long time: and it’s never because it feels as if it needs to, for any reason pertaining to the story or its players. It’s flashy filmmaking for the sake of it: and even when the occasional evocative shot makes its way through the frame, it cannot escape the sense of vapid adoration of self that has plagued this entire season.

At this point, looking for Mr. Robot to deliver anything tangible is a stretch: the overwhelming obsession to constantly call attention to different, more rewarding pieces of media and culture are selling its own, once intriguing material show. Stories like Ray, Angela taking down ECorp, Whiterose taking out FBI agents, the actual existence of fsociety, and the lives of Darlene and Cisco are stories all but dropped in this episode for more false developments, dark corners Mr. Robot concocts only to reveal there are but more dark corridors lying ahead (and oh yeah – remember the three days AFTER the hack we still don’t know about? That’s in the “90 days ago” time frame Whiterose mentions in this hour, in case thinks needed to be more convoluted). At this point, does it even matter if this entire episode was spent with Elliot in a lucid dream, or if Angela’s scene with Whiterose took place in some kind of alternate reality?

The fact we’re even asking these questions – along with Dom, inexplicably crying over the fact Alexa can’t experience love, just like her – proves that somewhere in this second season, Mr. Robot fell off the track it constructed last season, and began steamrolling down a different, immensely less satisfying path. Being able to match screenshots with cinematic greats is cool and all, but remember when fsociety actually meant something in the Mr. Robot world? Or when the show wouldn’t completely deny the existence of main characters, refusing to acknowledge their presence (or lack thereof), or the stories they’re participating in (I feel like Tyrell’s wife has spent the entire season getting ready to walk out the door and do something)? There’s a reason Tyrell’s sudden reappearance (I’d bet he’s still dead, by the way – notice his changed accent?) at the end of the episode feels so sudden and weightless: after wringing the cloth of his disappearance over and over for months, there isn’t a drop of drama, irony, or meaning left in his reappearance, only a sign that now, finally, the story for season two can begin.

Unfortunately, there’s only an hour left in Mr. Robot‘s second season, which doesn’t give the show much time to push past the first season, which the show’s eleven-plus hours so far this season has failed to do. Well, maybe “failed” isn’t the right word, because it hasn’t actually attempted to, now has it? It certainly talks like its moving forward, with Price’s new currency and Whiterose-funded bailout (a story that is thoroughly underdeveloped at this point, especially now considering how important Angela supposedly is), or the downfall of fsociety’s core: but those moments are all talk, as season two’s been more concerned with teasing Tyrell’s disappearance, and compounding Elliot’s psychological issues to the point where the entire reality of the show is frayed, making every cliffhanger (and subsequent reveal) that much less effective (look no further than Ray and the Dark Army-connected Leon, for proof of that). Mr. Robot‘s final trailer suggests to us all that “The Wait is Finally Over” – but at this point, is there anything satisfying Mr. Robot can deliver from the smoldering ashes of dead cyber executives (that nobody cares about anymore, apparently), plans so secretive the protagonist conveniently can’t remember it, and ‘secret’ messages deciphered through Google searches (which could totally be tracked, I might add)? Next week’s finale may provide a satisfying answer to that question, but the emptiness of this episode’s images and narrative decisions disappointingly suggest otherwise.

Mr. Robot’s second season continues to collapse on itself in a disappointing penultimate hour.