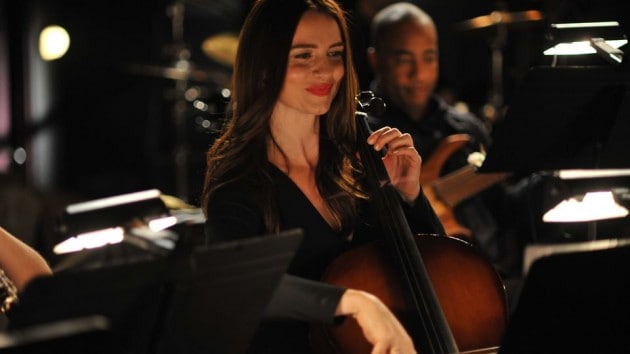 Though the pilot of Mozart in the Jungle established an ensemble of characters, there’s an extreme focus on Hailey in “Fifth Chair”, an attention that simultaneously works to the show’s benefit and detriment. On the one hand, putting Hailey’s first day in the symphony front and center lets the show’s best lead performance shine; however, that focus comes at the cost of everyone else, whose characters are boiled down and reduced to foot notes on the edges of Hailey’s journey. Like any show in its second episode, every creative choice feels like a yin/yang situation, decisions that ultimately define the uneven tone and depth of “Fifth Chair”.

An extended look into the daily life of Hailey puts Lola Kirke front and center for a half hour, and that’s certainly not a bad thing. In an episode full of broad, melodramatic performances (like the nasty lead oboe player, who Hailey predictably admires), Kirke’s Hailey is the one character given enough screen time to develop any emotional complexity, best seen when she visits Alex for what she insists is not a booty call, or when she curses after dropping her oboe out of her sweaty hands on the first day of practice (letting out an expletive that hilariously rings out in the acoustics of the theater). Those moments are Mozart’s best, when the show attempts to blend its various dramatic and musical elements together, captured wonderfully in Kirke’s performance.

A few other characters are given some room to breathe, but these attempts pale in comparison to the carefully-constructed arc of Hailey becoming substitute fifth chair; save for the parrot bit, I enjoyed what development of Rodrigo we are given in the episode. None of it is particularly unique material (he rides a bike to work, where Thomas takes a limo, in one of the episode’s more obvious attempts to draw parallels), but it’s effective thanks to Bernal’s facial tics, which give a lot of life to Rodrigo’s quietest moments, conveying the eccentric, passionate conductor’s slightly arrogant, playful personality through physical movement, much like the violin players he conducts during the first rehearsal. The character construction itself isn’t the most original on a writing level, but the execution of it on-screen by Bernal is great, and helps carry scenes where other characters cannot, like the meeting where he introduces Hailey to Gloria and some of her associates.

Unfortunately, the rest of “Fifth Chair” is a bit of a chore, from Thomas complaining about how he’s such a “good conductor” to Lizzie’s blossoming tattoo artist career; outside of what happens to Hailey and Rodrigo, Mozart in the Jungle is clearly still finding its footing. Cynthia and Thomas are mostly reduced to background actors in this episode, which pushes back the central dramas posited in the opening episode and allows room for Hailey’s story to breathe; a decision that works in the isolated context of this half-hour, but makes for a disconcerting change in narrative from “Pilot”, which focused much more on the changing power dynamics of the orchestra and those clinging onto a world they were starting to age out of (another scene with Cynthia and Hailey would’ve helped, but “Fifth Chair” is content to let Cynthia watch Hailey get berated). There’s not a lot of that happening outside of Thomas’ bedroom in “Fifth Chair”; and though the show finds some interesting new avenues to explore, it does so by completely abandoning one story, at least for the sake of this half hour.

The most important thing for a young show to display is progress; and if anything, “Fifth Chair” is more effective in bringing the audience closer to a central character, something the overly-busy pilot was incapable of doing. The show still needs to maintain a better balance between broad dramatics and reflective character study, but “Fifth Chair” certainly displays a competency on delivering the latter, at least on a smaller scale. Like the orchestra Rodrigo conducts through practice, Mozart is still operating best when each component is expressed individually; hopefully, it’ll be able to turn those individual sections into a symbiotic symphony.