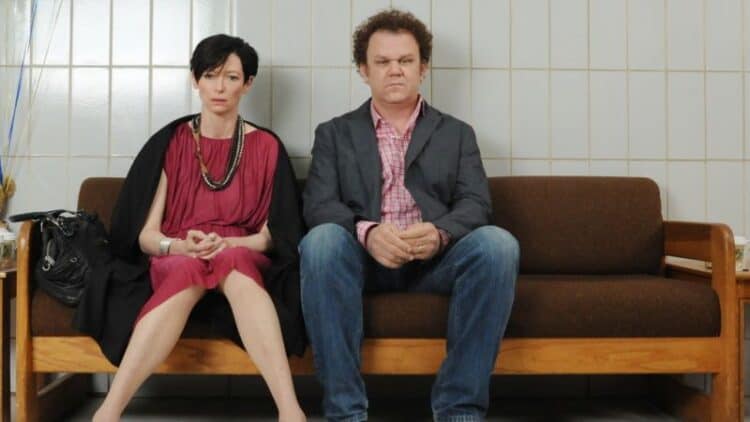 Movies about problem kids usually come down to the revelation that there’s something wrong with their home life, or something wrong in their body chemistry, or something that’s easy to explain. We Need to Talk About Kevin doesn’t really give the audience that kind of mild relief since from start to finish one has to wonder which way they need to turn to make sense of this mess. To be fair, the movie does what it needs to do, which is to keep people on their toes and wonder why in the world Kevin is such an unholy terror, but feeling sorry for Eva is kind of difficult given that she isn’t the easiest person to be empathetic toward. If anything, Eva is kind of a miserable human being in a lot of ways since she makes it clear at times that she didn’t want to be a mother. When her second child, Celia, comes along, she’s already been at her wit’s end with Kevin and is fully ready to embrace a child that actually does what she says.

The underlying problem with Kevin might be mentioned or alluded to, but it’s small comfort.

One has to give props to Ezra Miller for this role since back when this movie came out he was still fairly young, and he had to act alongside the likes of Tilda Swinton and John C. Reilly, who had already been celebrated actors at that point. But how he nails this role is a bit disturbing, to say the least, especially since it means that he’s been able to play a raging psychopath for quite some time. Despite the direction his career has taken in recent years, there was a time when Miller was someone who could classify as a gem whose shine hadn’t been fully discovered yet. His role as Kevin is definitely one of the best in the movies since it’s not only eerie and terrifying, it’s a little too realistic for some folks in the current era.

The story is one that carries a great deal of emotion to it.

For much of the movie, one can see how Eva has been devastated and left as a nearly empty shell by something that has left her as little more than a broken woman and an outcast in her own town. Working at a travel agency and avoiding people on the street is a part of her daily life, and it’s soon discovered why as the flashbacks continue to roll. But watching her go from being a travel writer with all the free time she needs on her hands to being a mother and a wife is kind of a tragic fall for Eva since the loss of her freedom means that she now has to deal with a son that apparently hates her, a husband that doesn’t believe her, and a life that’s several levels below unsatisfying. Parents watching this movie are bound to react in several ways since the fact is that a lot of parents do go through the idea of thinking that their children hate them for one reason or another. The only problem is that Kevin really does appear to hate his mother.

The progression of Kevin’s life would terrify a lot of people, for good reason.

The fact that Eva’s husband, Franklin, doesn’t appear to think that their son is in any way responsible for anything that Eva has accused him of is kind of disturbing. It’s true, a lot of people would likely give Kevin the benefit of doubt since thinking that a kid of any age can be so diabolical and mean-spirited is tough. It’s even worse when one parent sees nothing but the good and the other manages to see only the bad and the very worst. Franklin doesn’t see the monster his son is becoming and doesn’t even appear to suspect what’s happening when his wife is telling him that Kevin could be responsible for the terrible things that happen during the movie. Despite being a good father, Franklin is blinded by the idea that his children are little more than kids that are blameless of anything. Believe it or not, that kind of thought process is a little too common.

In the end, Eva is still the most tortured character in the movie.

Eva is, for lack of a better explanation, the last person standing when all is said and done since Kevin has made certain that her life will continue to be miserable as the past catches up to the present and the full explanation is laid bare. From killing his father and sister to the kids in his high school, Kevin is a monster that comes with no easy explanation as to why he is the way he is. He’s a terror, plain and simple, and a stone around Eva’s neck that she still calls her son.