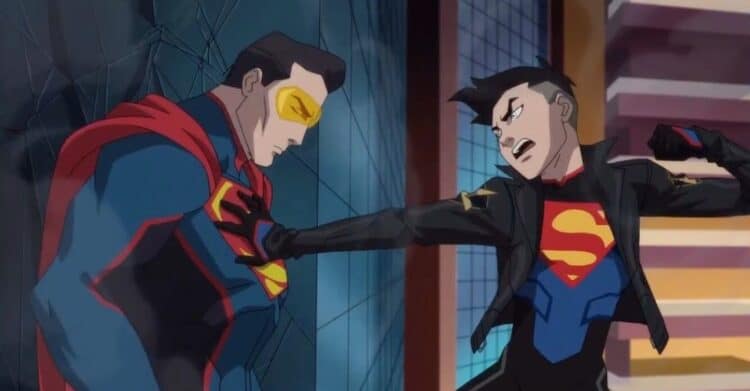 Reign of the Supermen could have been a very confusing storyline had it not been handled in the way it was. If anyone remembers the comic books they’ll likely recall that the focus of the stories was seen to head off in multiple ways as each new Superman was seen to exhibit their own abilities and had their own distinctive temperament. The movie, thankfully, kept things fairly simple but might have managed to upset a few fans since a lot of the lore had to be cut out to make the runtime conform to something that wouldn’t force the movie to become a running series. The inclusion of Superboy, the Eradicator, Steel, and of course, Henshaw, was handled well enough to keep things from getting too confusing, but it did make things appear far more brutal than before. Those that read the comics might have been watching patiently and hoping to see their favorite parts, or might have been gnashing their teeth trying to figure out why certain aspects had been kept and why others had been omitted. That’s kind of how things go, but it’s easy to understand how it can be a little annoying.

The way each Superman is set up is interesting enough to keep watching since Superboy does act like a spoiled punk that thinks he’s the hottest thing going, while Cyborg Superman (Henshaw) does his best to make everyone believe that he’s the real deal. Steel is obviously not Superman, but he’s an impressive character all the same, while the Eradicator ends up being a program that was meant to revitalize and protect Superman in the Fortress of Solitude where he was recovering after the beatdown he’d received from Doomsday. When the Eradicator and Steel fight it becomes a very one-sided battle that needs to be broken up before the Eradicator ends up going too far.

Once Superman recovers enough to move about on his own it’s eventually discovered that Henshaw is masquerading as Superman, and is being controlled by Darkseid. On top of that, Henshaw ends up empowering several citizens of Metropolis with technology that turns them into super-beings, but at the cost of their humanity as they’re soon dominated by their suits. In short, the loss of Superman is a huge blow to Metropolis that allows crime to escalate and gives rise to supervillains believing that the city is fair game. This is especially true when the Justice League is seen to disappear through a portal that was destroyed after sending them to another planet. One of the main points of this movie is that things appear to be hopeless no matter that four new Supermen are wandering about. The fact is that the Supermen aren’t exactly on the same wavelength as the original, since Superboy is a clone created by Lexcorp, the Eradicator is all about punishing criminals far more severely than Superman ever did, and Steel is an effective character, but at the end of the day he’s still just a man in a high-powered suit. Henshaw, on the other hand, appears to have a plan, but it’s revealed later that since he’s being controlled by Darkseid, he has little choice in what he does.

To be fair it felt like kind of a weak return after the monumental fight that was waged against Doomsday. It’s a bit understandable since trying to come up with another epic story following the one that gave way to one of the few things that no one had expected, the death of a hero that no one had ever killed before, was bound to be tough. But something about this story still felt as though it was missing, and it could be the fact that it had to be shortened in a big way to make certain that the main point was allowed to flourish. There were a few moments that were present in the comics that could have helped in the movie were omitted, such as  Cyborg Superman beating down Superboy so badly that some fans might have thought that the battle would have been the end of the clone. But the way things went it still felt like a decent movie that allowed the fans to get into it and see the return of the hero that many can’t stand to lose.

It does beg the question of what can actually kill Superman if he can’t be beaten to death, at least not in a way that’s going to stick. The emergence of other Supermen was interesting in its own way, but as far as following the death of Superman, this movie felt kind of hurried and not quite as effective overall when it came to bringing the man of steel back. It might have been better as a limited series. That way it might have been able to sneak in everything it needed to.