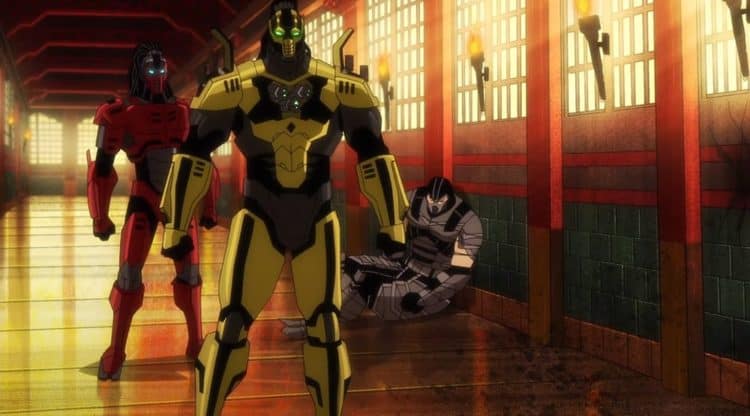 As a follow-up to the Legends movie, Scorpion’s Revenge, Battle of the Realms was a natural progression from the last movie that showed Shao Kahn punishing the sorcerer, Shang Tsung, for losing the Mortal Kombat tournament. But while Shang Tsung was at least attempting to keep the appearance of keeping to the rules, Shao Kahn was fully ready to invade Earthrealm without the benefit of winning the tournament. But instead of going so far as to anger the Elder Gods, Shao Kahn and Raiden would end up petitioning the gods for the chance to up the stakes and create a scenario in which the next tournament would decide whether Outworld would be able to invade Earthrealm or not. But of course, Shao Kahn wasn’t bound to play fair since his impetuous nature and given power has usually been enough to embolden him when it comes to getting what he wants. But what was fun about this movie, apart from the idea that it kept the gore and overall feel of the movie before it, is that this movie explains things a bit more as it shows Raiden saving Liu Kang from a gang of Tarkatans when he’s only an infant.

It also explains that Scorpion, who now holds the key that Quan Chi sought within him, is being petitioned by Shinnok, the mad god, to give up the item to allow the One Being to emerge and reshape the realms. This movie also introduces several more popular characters such as Stryker, Kung Lao, Sektor, Cyrax, Smoke, and a few others are brought into the fray as between Shinnok and Shao Kahn, the threat to Earthrealm becomes even more prominent. But the surprise comes during each match and outside of the tournament when things start to shape up in ways that many fans likely recognize and enjoy since, unlike live-action, the animated version does depict the fatalities and x-rays in a manner that’s extremely impressive since the type of damage incurred does make the story feel a little more efficient and even realistic as the characters are actually hampered by several of the attacks that are delivered.

The fact that several noted characters are killed in gruesome ways is kind of interesting, but as the story moves forward with Raiden giving up his godhood to enter the tournament, things get even more intriguing as Liu Kang defeats Shang Tsung after a heated match, while the other Earthrealm warriors end up defeating most of Outworld’s champions. When Shao Kahn defeats and kills Raiden, Liu Kang finally steps up and defeats Kahn after a grueling fight in which he fulfills his destiny. That’s not quite the end of it however since Shinnok, who has retrieved the key that Scorpion held, resurrects the One Being and becomes Corrupted Shinnok. As he begins to merge and destroy the realms, the heroes have to find a way to fight him and the demonic forces of the Netherrealm. Eventually, Liu Kang is granted the power he needs to fight Shinnok, defeating him after a furious battle as the power of the One Being is dispersed again. Eventually, the forces of Outworld and the Netherrealm are defeated, and everything is set right, for the moment.

The fact is that Mortal Kombat is an ongoing franchise since there are always those that desire power and will do anything to get it, and the realms are under constant attack by those such as Shao Kahn, Shang Tsung, Quan Chi, Shinnok, and others. It feels easy to think that eventually, we’ll see another animated movie at some point, but it will need to elevate itself from the past two movies to be accepted by the fans. The fatalities and battles seen in the two movies have been impressive, and the deaths of various characters have been a little surprising since seeing Shao Kahn rip Kung Lao in half after driving his own razor-edged hat into his body was intense. Also, seeing Stryker possessed by Shang Tsung, who forces Stryker to rip his own head off after impaling himself on a spike, was all kinds of gruesome. But this is Mortal Kombat, and the gore is one of the elements of the story that is fully expected.

It would be great to see Mortal Kombat proceed further into the storyline and follow the same path that the games have shown, or something similar at least, as the animated version has been a lot of fun and absolutely brutal. While it doesn’t necessarily replace the desire for the live-action movies, animated versions of the game such as this tend to represent the games in a manner that feels a little more accurate at times, even though the story is up for interpretation now and then. But as a lot of fans would would hopefully admit, this version is insane, but in the best way.