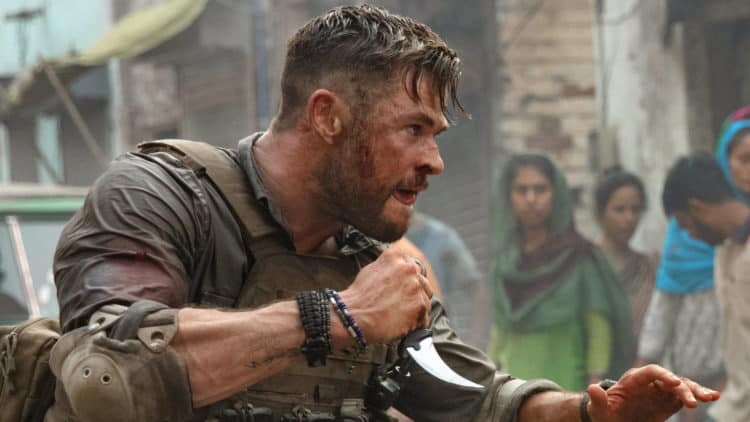 Was there ever a doubt that Chris Hemsworth was bound to be an action star? Sure, he’s taken on other roles that have departed from the action genre, and such roles have allowed him to grow and develop as an all-around actor, which has only increased his presence in the various action roles he’s taken on. A lot of people are going to think of him as Thor for a long time to come without any doubt, but Tyler Rake is another great role that he can be remembered for since when it comes to action movies, this one is brutal and efficient from start to finish as Rake comes off as a man that doesn’t really care if he lives or dies, though he isn’t about to hand his life, or that of another person’s over to anyone without good reason. When the son of a drug lord is taken hostage by a rival, the drug lord enlists his own man, threatening his own man’s family if he doesn’t retrieve his son, Ovi. If that doesn’t tell the audience that this is bound to be a no-holds-barred fight to the end then the audience is obviously missing something.

When Tyler is enlisted for the job it appears as though he’s not just burned out, he’s on the edge and waiting for something to tip him over. But the fact is that he does take the job and puts everything he has into it. Whether this is penance because he left his own son’s side after finding himself unable to watch his son’s battle with lymphoma, or something else, the point is that Rake makes his way into the mission with the understanding of what he needs to do and the ability to make it happen. His extraction of Ovi from his captors is a seriously brutal scrap that leaves him winded, which is great for an action movie since too many movies leave the protagonist feeling fine and not even breathing hard.

Watching Tyler fight it’s easier for the audience to imagine that as tired as he is, Tyler is going off of sheer grit and determination as he keeps going, since it’s not hard to imagine that the character might want to just lie down and rest after a while. But the extraction is foiled by the man that Ovi’s father has sent as he ends up taking out the rest of Tyler’s team. Ovi’s father also purposefully holds the payment that he was meant to wire to Tyler’s handler, and as if to make things worse, the corrupt cops that are working with the rival drug dealer lock the city down, leaving Tyler and Ovi no choice but to keep running as people continue to try to kill them at every turn. Just to add to the mayhem, Saju, the man that killed Tyler’s team, is trying to save Ovi, but the frightened young boy eventually comes to rely on Tyler, who has no choice after a while but to team up with Saju, as the rival drug lord that kidnapped Ovi, Asif, is trying to kill them both. Up until then, however, the fight scene between Tyler and Saju is all kinds of great since it’s not a slice and dice affair that leaves both men bleeding copiously even while they continue to hack away at each other, but instead turns out to be a well-measured and expertly choreographed battle that leaves both men feeling worse for wear before they have to keep moving on.

From the setting to the fight scenes that continue to roll along in this movie, Extraction is a dizzying experience that’s still insanely impressive since it feels as though the movie barely slows down and only does so when the characters have to figure out which move to make next. There are frustrating moments that are still expertly inserted to create an emotional response, which only heightens the overall feeling that the movie delivers to the audience. And yet, strangely enough, there’s a greater sense of peace when Tyler takes a bullet to the neck and falls off of the bridge where he, his handler, and Ovi fight as hard as they can to escape the corrupt police that have been attempting to corner them.

The fact is that Tyler is a tragic character as he hasn’t given up on life, but he’s become numb in a way that might be dangerous if he wasn’t so focused and intent upon getting his job done. Even as a mercenary he’s a warm-blooded action hero, but his general attitude is efficient, deadly, and steadfast as he refuses to simply hand Ovi off when the money for his rescue has been withheld. Some mercenaries might cut and run if they’re not getting paid, but Tyler is shown to have at least a  few tattered remnants of honor that see him through to the end.