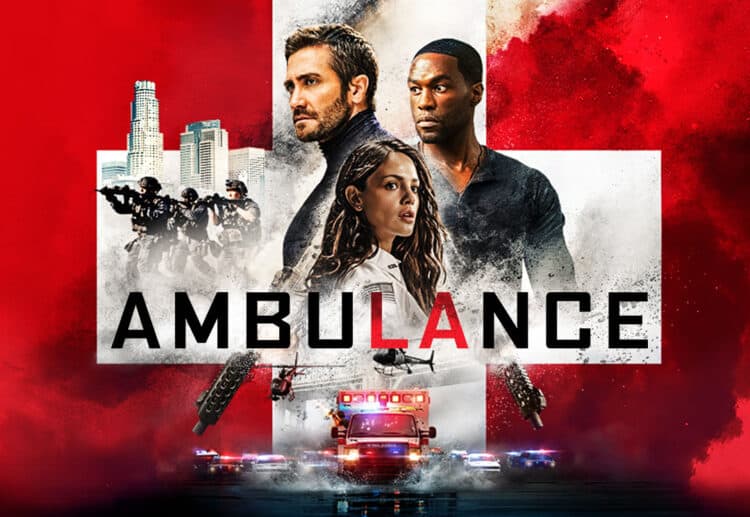 Random happenstance in an action movie can go a few different ways, but it’s usually easy to see how one can create a rough outline of how things are going to turn out depending on how they begin. For instance, Ambulance doesn’t really hide what’s going to happen, nor does the movie do anything else other than allow moviegoers to predict what’s going to happen several minutes in advance. Granted, there are a few moments in the movie that come as a mild surprise, but otherwise things kind of fall into place as the story rolls along. The guy that’s down on his luck has a family to support and has a friend/family member whom they seek help from is played by Yahya Abdul Mateen III. Jake  Gyllenhaal is the family member that is a less than savory character who does care a great deal about his adopted brother and offers him a way to relieve his financial burdens. Things fall into place rather quickly, and the one wildcard in the story, played by Elza Gonzalez, is an EMT that kicks off the movie by showing how disconnected she is from her job, a trait that a lot of people can no doubt tell is going to change before the end of the movie.

As a heist movie, Ambulance feels like a smash and grab type of story since Danny (Gyllenhall) and Will (Mateen III) aren’t terrible in their roles, but there is something about them that still makes a person question the veracity of their characters. As a war veteran,  Will is uncertain about the entire thing, but since his wife needs an experimental surgery that will cost hundreds of thousands of dollars, he’s not in a position to say no. This kind of hard-luck, go for broke type of decision has been seen many times in movies, especially in heist movies, and is something that many people still enjoy. But the morality of it is still enough to cause a lot of folks to question whether they would do the same thing or not.

Eventually, the action does start to kick off since one has to remember that this is a Michael Bay movie, which means there was bound to be an explosion or three at some point. As far as the action goes it’s not horrible, but it does feel kind of standard compared to what people expect these days. From the actual heist to the moment when Danny and Will jack the ambulance with Cam inside, as well as the officer that is accidentally shot during the heist to the moment when Danny and the gangsters he’s attached to start playing a dangerous shell game with the police, who dog the two men for roughly half the movie. Considering that the rest of Danny’s crew is taken out, leaving only himself and his brother alive to try and get away, the movie hinges its success on the ambulance ride at one point, which is risky, but had enough potential to do something interesting. It’s tough to say one way or another how effective this movie was since the action isn’t bad, the acting isn’t bad, but the overall idea still feels kind of messy.

The truth is that Michael Bay has earned a reputation for a lot of action that’s punctuated by explosions here and there, which is why I tend to call him Michael “Boom-Boom” Bay. If anyone else calls him that, it’s not much of a surprise. But while the reason for the nickname is obvious, the heavy-handed use of this technique is sometimes comical and at other times a bit over the top, especially when it comes to various movies that don’t necessarily need this effect. Ambulance doesn’t exactly benefit from the addition of one explosion or another, but it does show that Danny is a bit unhinged and that those he works with are equally ready to cause mayhem and destruction. As far as working with the story, the explosions that take place in the movie are, well, they’re not bad, but they feel excessive, even when dealing with a police presence that’s being led by a guy that set on getting the criminals at just about any cost.

There’s still something about Ambulance that doesn’t feel finished, and that demands certain movements within the movie to finish it off in a way that feels a bit clunky and too heavy-handed. It’s not such a horrible movie that it’s bound to make people walk out of the theater or turn it off, but it still has a quality that makes it less than pleasing at the end. The fact that Will seeks to do the right thing, and that Danny becomes so unhinged, almost gives this movie a comic book feel that doesn’t quite work. But in all honesty, that’s one opinion, and it’s not tough to think that many people enjoyed this movie.