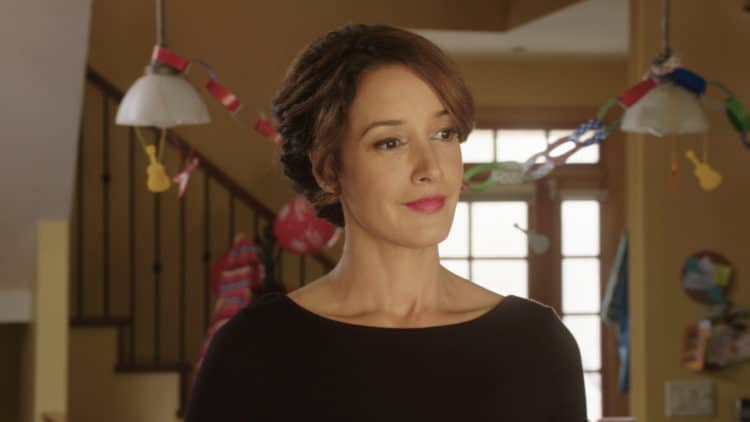 It’s been stated that there’s no doubt at all that A Wife’s Nightmare is based on a true story, but the fact that those that made the movie are so cagey about the facts makes a lot of people doubt the claim just a little. But it’s easy to agree that the story could become a situation that many women would agree is horrific enough to make them wonder about their own lives and what’s real versus what’s all in their heads. Liz Michaels starts as a woman that’s already been through her own tragic episode, as a nervous breakdown from earlier sets the tone for this movie as she and her family are trying to pick up the pieces following her stay in a mental hospital. One can only imagine what it might be like to come home after nearly losing everything, including one’s mind, to try to find their way back to what they consider to be a normal life, only to be thrown another curveball before things have reached a state of equilibrium. Learning your husband has a long-lost daughter however would be a seriously tough pill to swallow.

It doesn’t help that her husband, a guitarist that doesn’t do much as he continues to work on an album that might never get finished, isn’t paying for anything in their home, and hasn’t contributed to the home at all. But the sudden revelation that he has a daughter that he never knew about is enough to shake everyone up, including their son, who’s having issues of his own dealing with the fact that his mother went to a mental hospital. With the inclusion of another person in the house, especially another person that changes up the family dynamic, it’s fair to state that everyone is suddenly forced to adjust, especially when the husband, Gabe, accepts the young woman’s story so quickly. That should send alarms ringing in anyone’s head, especially when the lackluster explanation of how the young woman, Caitlin, came to find the family.

The sad part of this for Liz is that she has no idea what to believe and as a result, is immediately suspicious of Caitlin, who does her best to be friendly, accommodating, and also manages to find a way to slide into the home life of the family as it’s revealed at one point that she is Gabe’s daughter. Liz is still suspicious for much of the movie, especially when things start to happen that wouldn’t have happened had Caitlin never showed up. After getting her old job back, Liz finds that her presentations for an important client have been erased, which ends up infuriating her boss, who believes that the same problems are beginning to occur once again. Things don’t get any better when she confronts Caitlin about this and is placated more than once by Gabe, who is accepting Caitlin into their household without question. The complications only continue to build when their son AJ begins to bond with Caitlin, especially after she helps him to attract the attention of a young woman that he’s been desperate to speak to for a while.

When Caitlin and AJ share a sudden kiss that comes out of nowhere though, things get even tenser, and when Gabe introduces Caitlin to a younger friend at a party, then grows jealous when the friend gets a bit handsy, things get even worse as Liz continues to wonder about and suspect that Caitlin has been messing with her laptop. When she overhears AJ and Caitlin talking about their kiss she can’t help but bring the matter to Gabe’s attention, as well as the fact that he appeared jealous when the man he introduced Caitlin to was getting a bit too forward for his liking. Many fathers might recognize the idea of not allowing a man they consider as wrong for their daughter to get too close, but the fact is that Gabe introduced them, then acted like a jealous teenager when things became a little too friendly. The problem is that Liz’s mental state still isn’t solidified enough, and Gabe’s attempt to gaslight her proves successful as he continues to reassure Liz that everything is fine and that Caitlin needs time to adjust, as do the rest of them.

Things continue to progress in a manner that’s less than ideal as Liz continues to be suspicious of Caitlin, and even starts to dig into the younger woman’s past as she ends up finding that the DNA test that confirmed her as Gabe’s daughter was faked and that her background information has been faked as well. By the time everything shakes out, meaning that AJ catches Gabe and Caitlin in bed together, it feels like a rather ham-fisted plot concocted by Gabe and Caitlin, who were having an affair while Liz was in the mental ward. Once the big reveal comes it makes a person wonder how anyone could be taken in by such a story. But it’s worth thinking that Liz, who already has a history of mental issues, was an easy target, and that Gabe wasn’t the brightest bulb in the box when it came to coming up with a plan.