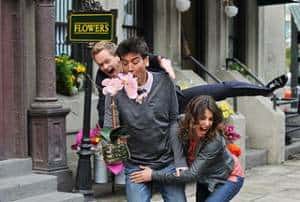 To be truthful, it took me a while to figure out what I wanted to say about last night’s How I Met Your Mother. While the episode definitely had it’s high points and set things in motion for the next two seasons, I was left with some mediocre feelings. It was alright, but was by no means a favorite of mine. Maybe it was the Zoey of it all?

However, in this, the season finale of season 6 entitled ‘Challenge Accepted’we finally find out whose wedding it is where Ted meets the one.

As many fans, reporters and bloggers alike speculated, the wedding is Barney’s. So now the question, in addition to who’s the mother, becomes who’s his bride? With the reappearance of Nora during tonight’s finale, could it be her? He did make a declaration of ‘˜Challenge Accepted.’

Or could it be Robin?

There were many words and looks thrown around between Robin and Barney tonight leading me to believe (and HOPE) that she just might be the bride. The subtext in their conversations about Ted and Zoey was undeniable. Not to mention, my completely shallow observation that in the flash forward, Lily’s dress sure looked to be a bridesmaid dress with the matching shoes and all.

Then again, this wedding is taking place ‘a little ways down the road’so the bride could be someone we’ve never met. We’ve seen Barney grow into more of an adult this season but he still has some ways to go before he’s the marrying type. Who knows what will happen between now and whenever that time may be?

We also found out that Lily and Marshall are pregnant. That’s right, the Erickson’s are finally having a baby. What Lily thought was a case of food poisoning was actually just a case of morning sickness. Hurray!!

Marshall also thinks he blew the interview at Bloom Greenberg and Associates (the biggest environmental firm in New York) because of his suspected forth coming food poisoning. Something tells me he’s wrong about this.

Ted, meanwhile, is nervous about his new building and becomes a sentimental sap who freaks out and attempts to get back together with Zoey. That is before Robin and Barney stop him in a hilarious take down at the intersection of Smith and 9th in Brooklyn.

So what did everyone else think? Did you love it? Are you excited for Lily and Marshall? Did you think it was going to be Barney’s wedding? Who is Barney going to marry? And when will this wedding take place? Let us know in the comments below!