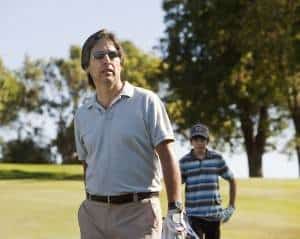 Last night on MOACA, the theme for our Three Musketeers was character, which was given to us on various levels that I labeled them: heartwarming, understandable, and a complete a waste of one character’s time. But as a whole, the episode worked well by showing the guys taking control of their lives for once instead of letting things crumble, or just gestate around them. So without further adieu, here is the recap for “Mind’s Eye”.

After golfing with his son Albert, Joe is shocked to hear his son asking about the Mile High Club. While Joe stutters around the subject, Albert is already hipped to the game and deduces that it means sex. Joe is then confused when Albert says he didn’t get on the bus when Joe dropped him off for a field trip, which makes Joe worry about Albert’s mind state when Albert doesn’t give a good coherent reason why.

Terry’s boss, Dave, asks for Terry’s assistance in helping him sell a family home by acting as a really interested potential buyer. Terry doesn’t want to do it, but he eventually relents and agrees to the “job”. When Terry gets to the location (late as hell, mind you), Dave shows Terry the other actor who is in attendance, who is actually an actress named Erica (special guest star Cynthia Watros), who is also playing a decoy buyer. Terry asks for Dave’s wedding ring and slips it on. He then makes his way to Erica, who is talking to other buyers, and introduces himself as Erica’s “husband”. She catches on to the ruse and plays along. Slick!!!

While Marcus shows off at work (the guy is doing pushups in the middle of the dealership, which is reason alone for me to not want to purchase a car from there), Owen notices that his sales are still looking sick and decides to step his game up. His first chance comes with a man and a daughter who are looking for the daughter’s first car. She has her eyes on one particular car, but it’s higher than what she and her father can pay. So Owen tries to give them a deal that is only $1000 dollars off the sales price, which is a jacked up price to begin with. Owen and his supervisor put the pressure on the father and daughter, which eventually makes the girl cry since she can’t get the car. The father relents and settles for the “deal”, but Owen feels like crap. He later explains this to Melissa and says that he feels that the people he sales cars to hate him at the end of the day for making them pay money that they don’t have to. Melissa states that they might have a hatred towards the idea of him as a salesman, but not him personally. Owen doesn’t know about that sentiment.

Joe and the guys hike and catch up with each other. On the discussion table is Albert and what’s eating him. Joe feels that Albert is 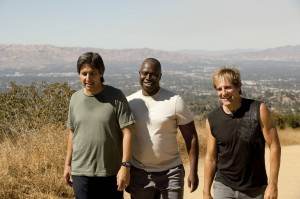 either being bullied, gay, or worse… gaining Joe’s goofy, neurotic characteristics. Later at the shop while playing with balloons with DaShaun and Carlos, Joe is shocked to see Albert stop by the shop. But the shock is short lived as Albert reveals that he tried out for the golf team at school and made it. Joe is elated and Albert says that he used Joe’s “mind’s eye” technique and it worked. At the diner, Joe tells the guys about Albert being on the golf team and using the “mind’s eye” to achieve the spot on the team. Later after losing a game of online poker, Joe talks to DaShaun about Albert and asks if he thinks Albert is “quirky” like Joe. DaShaun says that it’s normal for someone his age and that he was the same way, but that working at the party store helped him out by keeping him focused. But this is DaShaun we are talking about here, a guy who believes that T.I. came up with a quote that has been in the Bible since the beginning of civilization.

But later, Joe gets a call from Albert’s golf coach, who says that Albert doesn’t want to get on the bus on the day of a big tournament. When Joe gets there, he finds Albert sitting as far from the bus as possible, which is serious as hell if you ask me. When Joe starts listing all the quirks that he has, Albert says that he has them too, which confirms Joe’s fears, but instead of panicking, Joe offers a solution to help Albert. He tells Albert to get on the bus and if he starts to get “shaky on the inside” then use the “mind’s eye” trick to think that he is in Joe’s truck, which will be following the bus to the tournament. In the end, Albert still rides with Joe, which doesn’t phase either one bit. Congratulations, Joe! You passed the test! Oh, and this storyline? Heartwarming.

Owen has a customer who wants to pay lower than what the dealership is selling a Cobalt for. Owen tries to stick by his guns, but 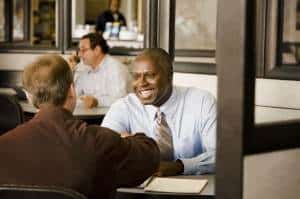 then Owen asks the customer if he hates him and the customer is rightfully perplexed. Owen then tells the customer to list the price that he feels more comfortable paying. When the customer does this, Owen matches his price and sales the car. But you know when you do a favor for one person and they can’t keep their mouth shut? Uh huh. Yep.

A guy comes in looking for Owen, to Marcus’s dismay. Owen does the same thing for this guy like he did with the previous customer, and then the ball starts rolling. Soon people from all walks of life is coming in looking for the “chubby, fat, black guy”, which Owen takes with pride, especially since his sales are going through the roof. Owen also is taking pride in making people happy and feeling rewarded by their thanks and gratitude at the end of the day. While all this is going on, Marcus is livid and Owen Sr. starts paying close attention. During a sales meeting, it is revealed that Owen knocked Marcus off the top of the sales chart, which Marcus whines about. Owen slightly gloats about the new position and achievement until he sees his check. It seems that he took a hit in his pocket for being nice, but he doesn’t let this bother him. He later gets home and tells Melissa that she was right and that he feels good for his performance that week. Then he hands her his check and Melissa’s face falls. Owen then declares to make little girls cry when he goes back to work Monday morning. HA!!! This storyline was highly understandable.

Terry takes to his new role as the husband of Erica to the point where he has added in the fact that they have kids, are going to have kids, or have adopted kids. Eric plays along, but it can be seen that she is not too thrilled with the prospect of “having kids”. But for Terry, this exercise makes him come to the gig early and prepared, but it is really a way for him to try to get to know Erica better. In the end, Erica questions Terry’s ‘biological clock’ since he brought kids into the equation. I wonder about that, too, Erica. When Terry finally tries to make that move on Erica, a guy shows up and he is revealed to be Erica’s boyfriend. Terry’s pride is shattered into a million pieces and this is where I felt that he wasted his time. But you can’t blame the guy for putting on a good game!

A great episode that took the characterizations some steps further in a positive direction. Instead of moping and doing little and moping again, the guys stepped up to the plate and hit some home runs, but Terry’s ended in a foul. I was really happy that Joe didn’t go into panic mode when he found out that Albert was gaining some characteristics that Joe has. It is inevitable, true, but I can tell that my dad wished that I hadn’t gained some of his or my mom’s characteristics. We had the convo that Joe and Albert had, but it wasn’t as easy as it was for the TV characters. Again all three guys held a mirror to my personality this week with their storylines and it was refreshing to see. Can’t wait for next week!