Home
Television
Meet The Cast Of “I Love That For You” 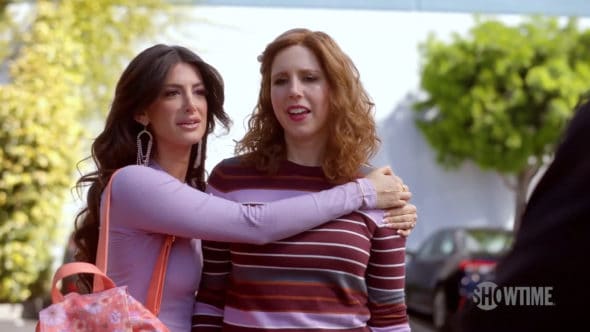 A new series is coming to Showtime, and it features some of the funniest women in comedy today. I Love That For You is a half-hour comedy show created by Vanessa Bayer and Jeremy Beiler. The show depicts the story of Joanna Gold, who dreams of hosting a shopping channel. To avoid getting fired from the job of her dreams, she lies that her childhood cancer has returned. I Love That For You is set to premiere on April 29, 2022. It’s produced by Annapurna Television, which has worked on She Said, Kajillionaire, Bombshell, Wounds, and Hustlers. Here are the actors set to play roles in the much-anticipated comedy series I Love That For You.

Vanessa Bayer, who also created the series, stars in the show as Joanna Gold. The plot of the series is loosely based on her personal experiences with childhood leukemia, which she was diagnosed with when she was 15. In an interview with CNBC, she talked about getting through the disease through what she knows best — humor. “I used humor a lot to get through,” she says. “It was something that I think made me sort of go into comedy because, you know, my friends and I could laugh about it all so much and so I think it really helped me get through that time.” A former cast member of Saturday Night Live, working at the sketch comedy show from 2010 to 2017, she has since carved a career for herself independently. After SNL, she’s had guest appearances in Will & Grace, Single Parents, What We Do In The Shadows, I Think You Should Leave with Tim Robinson, Helpsters, and Brooklyn Nine-Nine. On the big screen, she’s starred in The Polka King, Ibiza, and Wander Darkly.

Another SNL alum working on I Love That For You is Molly Shannon, who worked on the show for six seasons, from 1995 to 2001. Since then, she worked in several TV shows, the most notable of which is Divorce, where she played a lead role. Currently, she stars in The Other Two, a comedy series that also features Helene Yorke and Drew Tarver. On film, she’s worked on Promising Young Woman, Horse Girl, and Spin Me Round. In an interview with Collider, she explained why she left SNL, saying: “So when I left, I wasn’t leaving to go do something else. I was just leaving because I wanted to spend more time with my dad, and I wanted to have kids, and date more. And I just wanted to have personal time. So I wasn’t leaving to have some plan to go somewhere. I just wasn’t at all. I felt really great, that I had a good run. And if anything, I left to have more of a personal life.”

Jenifer Lewis plays the CEO of SVN, the shopping channel that Bayer’s Joanna Gold works for. Known as “The Mother of Black Hollywood,” alluding to her frequent role as a mother in film and TV shows, Lewis has appeared in The Wedding Ringer, Think Like A Man Too, Baggage Claim, The Brothers, The Preacher’s Wife, Poetic Justice, and What’s Love Got To Do With It. Currently, she has a recurring role in The Ghost and Molly McGee, an animated series on Disney Channel.

Matt Rogers plays Darcy Leeds in I Love That For You. The young actor, writer, and podcaster hosts Las Culturistas with SNL star Bowen Yang. He also worked as a staff writer for The Other Two, which stars Molly Shannon. His film debut is also set to premiere this year, titled Fire Island, which stars Joel Kim Booster, Bowen Yang, and Margaret Cho.

Paul James is also playing a character in I Love That For You. He previously appeared in Greek, portraying Calvin Owens, a gay member of Omega Chi Delta.

Veteran actor Matt Malloy also joins the cast of I Love That For You. He’s worked on movies like Battle of the Sexes, Outside In, and Sierra Burgess is a Loser. On TV, he’s appeared in The Sex Lives of College Girls, At Home with Amy Sedaris, and Alpha House, playing the role of Senator Louis Laffer Jr.

Another veteran performer joining the cast of I Love That For You is Bess Armstrong. The actress gained prominence for her roles in The Four Seasons, High Road To China, Jaws 3-D, and Nothing in Common.

Actress Punam Patel will also be portraying a yet-to-be-named character in Bayer’s I Love That For You. She’s most notably known for her role as Kim Laghari on Special, for which she was nominated a 2019 Primetime Emmy Award for Outstanding Actress in a Short Form Comedy or Drama Series. Currently, she appears in Space Force as Ranatunga.

Popular funnyman Jason Schwartzman also has a role in I Love That For You. Jason and Vanessa previously worked together on the movie The Polka King, starring Jack Black. Schwartzman became a household name, thanks to Wes Anderson’s 1998 film Rushmore. Since then, he’s appeared in several Anderson movies, including The Darjeeling Limited, Fantastic Mr. Fox, Moonrise Kingdom, The Grand Budapest Hotel, Isle of Dogs, and Anderson’s latest, The French Dispatch.

Actress Ayden Mayeri played parts in New Girl, The Afterparty, and Marriage Story. She’s set to join Bayer in I Love That For You.

Last on the list of actors joining I Love That For You is Johnno Wilson. The actor’s IMDb describes his work as follows: “Johnno Wilson was born in New York City and raised in Massachusetts. He graduated from Georgetown University where he studied English Literature and French. He is a comedian, actor, writer and producer, and is known not only for his work on stage and screen, but also for the fact that he is the Penmar Municipal Golf Club Champion. He beat his brother Peter to win. It was incredibly dramatic.” On Instagram, Wilson announced his participation in I Love That For You and expressed his excitement for the show’s premiere, writing: “The last few months has been a friggin dream playing Perry with these incredibly talented and wonderful people. Honestly, I love this show for you. Can’t wait for 4/29!”