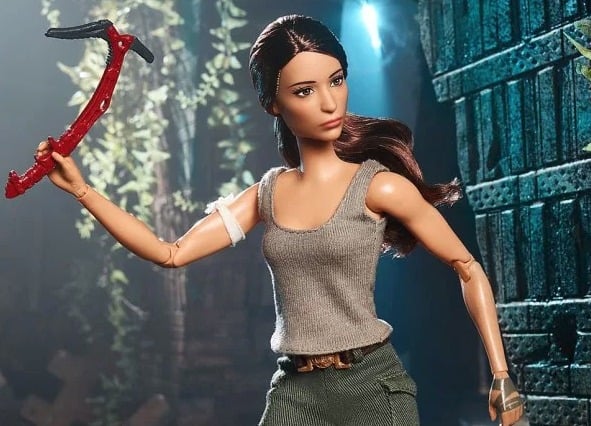 Mattel is bringing out the Lara Croft Barbie from Tomb Raider and so far I can’t help but wonder what, if anything, people will be saying about it. To be quite honest it doesn’t look like anything might be wrong with this doll, though I can already imagine that someone might have something to say about, well, something. If you take a good look at her though there’s nothing really all that bad. For a Barbie she’s not possessed of a huge and unrealistic bust, as Lara Croft has been known for in the past. She doesn’t exactly look like a glamour girl despite the fact that she is modeled after an attractive actress. This is doll that is going out into the wilds on a treasure hunt inspired by her father after all, she doesn’t have time to apply makeup and look her best. Plus she already comes with two bandages to show that she’s been through an ordeal or two, and she’s definitely dressed for a warmer climate and a more active life than a lot of Barbie’s might even dream of. In short she’s one of the few action Barbie’s out there that really looks more like an action figure than a doll.

I have managed to notice these types of dolls coming out however as they’ve been popping up in the toy aisles in many stores. Star Wars has released their own type of Barbie dolls as well as the success of The Force Awakens, Rebels, and even The Last Jedi have taken effect. They’ve even come out with Padme and Princess Leia action dolls that are placed in with the Disney princesses and the other dolls. Barbie of course usually gets her own section while those are that are modeled as part of the same line but still belong to different franchises tend to be lumped together on an opposite shelf or somewhere nearby. It’s almost as though they don’t want Barbie associated with the type of women that are rough, tough, and tumbledown go-getters. That seems to be sending a mixed message really since Barbie has been undergoing such a huge transition as of late.

Barbie’s aren’t what they used to be after all. The whole image and form of Barbie has changed throughout the years until now we’re seeing more politically-correct fashion designs, Barbie’s that have jobs that equal and rival men, and Barbie’s that are more anatomically acceptable, as in no pencil-thin waist lines and no perfect form. That’s all well and good and it’s nice to see that toy manufacturers are no longer going by unrealistic designs, but it hasn’t satisfied everyone yet. Chances are it never will. Someone’s always going to have something to say about everything, the best we can do is just hold onto our own beliefs and do what we can to appease our own sense of normalcy while attempting to respect that of others. Honestly this Barbie looks pretty accurate in comparison to the woman she’s modeled on, so I don’t see any issue.