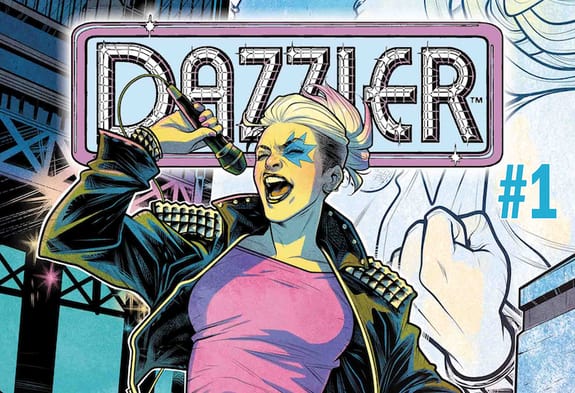 There are a lot of heroes in the Marvel universe, and despite the feelgood way that even the most normal of heroes can be elevated, those that possess some kind of power tend to be noticed the most. In Dazzler’s case however she’s been a hit and then she’s disappeared for a little while until she’s ready to be unveiled yet again. She’s gone through a disco phase, then a pop phase, and finally a punk rock phase that seems to have lasted the longest thus far since it’s one of the more current looks she’s taken on. Her powers have been laughed at throughout the years since producing light energy doesn’t seem quite as impressive as having a healing factor, metal skin, or being able to control the weather. But after the laughter dies down it’s easy to dig deeper and realize that any mutant that deals in energy manipulation of any kind usually ranks right up there with some of the most powerful since their upper limits are so hard to find. In Dazzler’s case those limits don’t appear until she’s simply taxed out in a physical sense considering that even a mutant’s body will wear out eventually. But in terms of who she is and what she can do, Dazzler is one of the part-time X-Men that has always been kind of pushed to the side in terms of what she wants to do to contribute to the team.

10. She’s had her own comic book series in the past.

Dazzler did have her own comic book and for a while it seemed to do okay. But when the other mutant teams and heroes started going off she kind of got left behind since her powers were, at that time, considered more for show than anything, unless of course a reader kept up with all the latest developments.

9. Her powers usually only manifest when she sings or when there’s music she can draw from.

She converts sonic energy into light energy, so pretty much anything that can be heard is hers to play with and use in any way she wants. For a long time she used this in her stage shows and didn’t really let on that she was a mutant. But in a soundproof chamber it’s safe to say that she might be in a spot of trouble.

8. At times her powers have been as much of a curse as a boon.

Dazzler has definitely made good use of her powers to highlight her career but there have also been times when they’ve done her nothing but ill since other, more powerful beings have sought her out to use them as a weapon or as a means of getting what they want.

7. She was used by Doctor Doom once to procure an item he desired.

It’s not usually willingly that Dazzler follows another person’s whims but Doctor Doom doesn’t have a habit of asking nicely when he needs to use someone, so you can imagine that Dazzler didn’t see a lot of choice in this matter.

6. Dazzler has been associated with a wide array of heroes.

While her association with the X-Men is a big gimme she’s also spent time with the Avengers and been around several other heroes like the Fantastic Four and Spider-Man, so she’s managed to make acquaintances throughout the superhero world during her time in the comics.

5. She’s a lot more powerful than people give her credit for.

Like I said in the beginning, any character that works with energy absorption, manipulation, or can utilize energy in various ways is an individual whose upper limits aren’t always easy to measure or reach since the potential for such a thing is hard to gauge. There are those who are far more skilled at it than Dazzler, but she’s still a powerhouse when she wants to be.

4. Galactus once imbued her with the Power Cosmic.

This is further proof that she’s quite powerful since Galactus doesn’t come calling for just anyone. When one of his heralds, Terrax, went astray he recruited Dazzler and imbued her with the same power that he gave the Silver Surfer in order to bring Terrax back.

3. Her powers have interfered with her singing career quite a bit.

There is a lot of racial bigotry towards mutants in the comics as they’re considered to be the undesirables or deplorables of the comic book world in many instances. So it stands to reason that when she was outed as a hero or a mutant Dazzler tended to lose a lot of gigs.

2. She’s faked her own death before.

In order just to get away from the pressure and because of circumstances that arose at the time Dazzler did manage to convince people she had perished, though eventually she did surface again.

1. For a while, she and Warren Worthington III, aka Angel, were an item.

Angel did court her for a while but as with many romances in the comics it didn’t quite work out and Dazzler had to move on as her life has been a lot more tumultuous than a lot of readers seem to realize.

It’s about time we saw her on the big screen though.