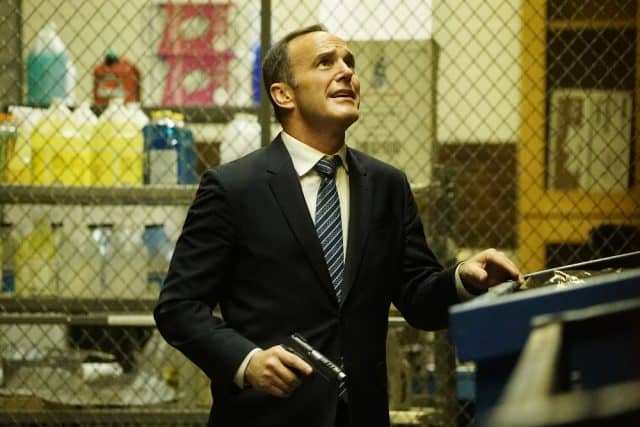 Agents of SHIELD has really been rolling on all cylinders lately. Honestly, with a rocky start and a couple small valleys, SHIELD has been a consistently good show for the last four years. “Lockup” was no exception. It was tight, exciting, and explored character relationships, escalating dramatic tension, and a whole lot of action.

This week on Agents of SHIELD: Coulson, Mack, May, Robbie and Daisy organize a prison break, racing against the ghosts. Simmons worries about her upcoming lie detector test, but is sidetracked with a special “mission” from the director. The new director debates an anti-Inhuman Senator live on television.

This episode felt very tight and focused, and by looking at my brief synopsis, that’s due in large part to not being bogged down with excess, extraneous plot threads. They had a story about Simmons and the director, and then the rest of the cast was involved in the primary story. The jailbreak story was exciting, focused, and was able to give strong character moments to everyone without overusing screen time.

Especially prevalent were the moments for Daisy and Robbie. Daisy, by locking herself inside the prison cafeteria, was expressing self blame. She clearly still loves her friends at SHIELD, but feels guilty for all that’s happened, and doesn’t want anyone else to get hurt. Robbie, meanwhile, is struggling with the “spirit of vengeance” (excuse the film reference) within him. I was kicking and screaming when he went into that cell to confront that bad guy. I knew it would end badly, but it was a really strong character moment from Robbie, and Gabriel Luna maneuvered those moments beautifully.

One of my favorite things about Agents of SHIELD is something I like to call “Ornery Coulson”. Clark Gregg is at his best when Coulson is sarcastic and spouting off one-liners as the show goes on. This episode utilized ornery Coulson perfectly. Sometimes, he can take a backseat to other characters when he’s ornery, but in “Lockup” he balanced it perfectly with the mission and action. The dialogue was well-written, and it was all perfectly delivered by Gregg within the context of the mission and the episode. More ornery Coulson please!!

Perhaps the best thing this episode did was increase the sense of mystery and wonder within the Ghost Rider mythology. Of course, I can imagine that with the upcoming release of Doctor Strange, they really want to explore a little bit more of the magical and mystical Marvel universe. Still, I’ve got a lot of questions about both the book and Ghost Rider himself, where that power comes from, and I’m really looking forward to all these mysteries being solved.

“Lockup” may have been the best episode of the season yet. It seamlessly combined action, drama, a good sense of fun (looking at you ornery Coulson), and deepened the mythology without ever losing steam or becoming stale. It was exciting at every turn, and I’ve never been more excited to see what comes next.

What do you guys think? Did you enjoy the episode? Let us know in the comments!

Simmons practices for her lie detector test, while Coulson and the rest of the team organize a prison break on this week’s strong Agents of SHIELD.