Home
Movies
Martha: Cool Short Film about a Teenager Waking Up as the Last Person on Earth 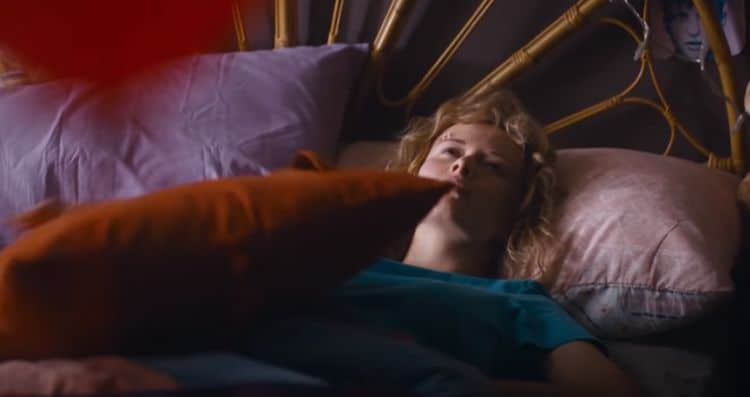 Waking up thinking that you’re the last person in the world would be creepy for a lot of people since to be perfectly honest, the world as humans know it couldn’t function without millions upon millions of people doing their job. Keep in mind, I did say ‘the world as HUMANS know it’. The world would go on obviously, but things such as electricity, running water, and many other niceties that people have worked hard to develop for decades and even centuries as necessities and luxuries wouldn’t last nearly as long as some might think. That’s one clue as to why was it was easy to tell that this short film was hiding something. Another is the wound over the young woman’s head since it looks slight and could very well be, but head wounds are quite different and hard to determine if one isn’t a doctor or doesn’t really know what’s going on. But the cracked phone, the woman waiting out in the hallway, the look she gives to the ice cream when opening the jar, and then, of course, the crashed car that has a crack in the windshield where a forehead might have connected, all start pointing to the idea she’s not the last girl in the world, she’s the only girl in this one. Obviously she remains oblivious to this fact long enough to start losing her mind just a bit, as isolation would do this to a lot of people given that humans are very social creatures quite often and we tend to need interaction even if it’s from afar. Those that go too long without human interaction have been seen as a bit, well, batty. Their sense of reality begins to slip away as the lack of human companionship forces many to turn inward for reflection, and in some cases, this can get a little crazy.

When someone does show up though, her reactions are varied as she appears to be gracious, grateful, manic, and then accepting. But the audience is bound to be expecting the other shoe to drop, so to speak, at any moment, and it does once she and her new friend get a little too rough with a shopping cart, hitting a post and spilling her out, which jars her memory. The car crash that put her in the hospital comes back to her, she realizes now why she’s here, and what happened. Meanwhile, her mother visiting her in the hospital lays out a few items for her, including a new pair of headphones. It’s a sad story, but it’s one with a twist that a lot of people likely saw coming and were waiting for as near the end she packs to move on, which many can divine the meaning of as the breath in the mask she’s wearing over her face in the real world goes clear, denoting that she has indeed moved on from her mortal coil. Stories like this make a person wonder if there are spirits moving among us that we know nothing about, viewing the world as an empty place until someone comes to guide them forward, or until they simply fade out. That might sound like an odd thought, but it’s no stranger than any other that people have had concerning the afterlife. The question of what lies beyond that veil between life and death is a question that many people want to be answered, and some believe that they have.

The reality of living and dying is that there’s much we see, and much more, theoretically, that we don’t. The human mind is still an intricate tool that is capable of things that humans aren’t fully aware of yet, among them the ability to keep our rational selves from suffering the massive shock of realizing that we’ve passed on without any rhyme or reason other than random chance. Some people couldn’t handle this, and would likely go mad to think that all they’ve done, all they’ve been to people, and everything they’ve experienced can be over so quickly. There are those that are resigned to this fate but still choose to enjoy life since while we’re here there’s nothing else for it but to get along and go along until the entire mess is sorted out in the end. It sounds a bit simplistic when saying it in this manner, but the truth is that death is rarely a stabilizing force, as it’s a goodbye to a world that we were coming to know, a world that was full of things and people we wanted to see again. The abrupt nature of leaving this world is something that many can’t cope with. There’s not much of a trick to it really, but there are ways that a person can lessen the sudden impact of death, and one of them is knowing that one day, all of us will die in some way. It doesn’t really help, but it might soften the blow.