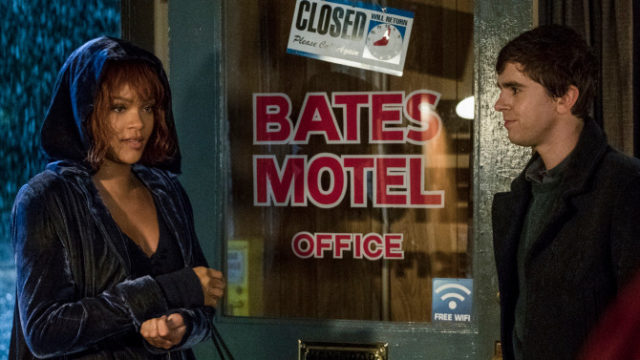 Tonight is the episode that everyone’s been waiting for on Bates Motel.  It’s not only the debut of Rihanna playing Marion Krane but it’s the intersection of the 1960 Hitchcock classic and this clever contemporary prequel, which in its final season has dramatized the psychological deterioration of Norman Bates (Freddie Highmore) after the death of mother Norma (Vera Farmiga), whose spirit just won’t let the poor boy go.  According to TV Insider

Mother and son are one, and it’s not a healthy combo–and Norman is in a particularly vulnerable state when Marion Crane (Rihanna assuming the role Janet Leigh played in the original film) checks in. “Wow, this is retro,” she says when he brings her into his office for a sandwich. She has no idea. And while a shower does play a significant part in what comes next, no spoilers on how this stormy night plays out. In other Bates news, Norman’s brother Dylan (Max Theriot) learns his mother has been dead for two years and decides to confront Norman–which only adds to the emotional trauma. Not an episode to be missed.

From what we know, Rihanna will be involved in a pretty steamy scene on the show.  And it’s not like she hasn’t acted before so I expect a pretty solid performance from her.  Hopefully the Vince Vaughn Psycho remake will be removed from my memory forever after seeing Rihanna take over Anne Hesche’s role in that film.   Boy was that brutal.   Personally I don’t think anyone can touch Janet Leigh from the 1960 film but maybe Rihanna will leave a lasting impact.

I’m not gonna lie, Rihanna, looks pretty sultry coming in from the rain.