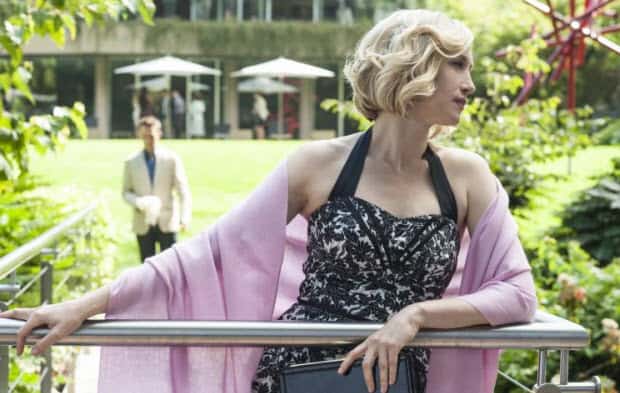 When Norma makes a revelation this week on Bates Motel, it’s not completely unexpected, yet still shocking. The info hurts the son she holds at a distance and as far as I’m concerned fills a huge chunk of the puzzle that is Norma Bates.

Norma didn’t get a role in the town musical, but Norman did get a part in the chorus.  Cue the jealousy of her son. Norman just can’t win with his mother. He even offers to drop out but is persuaded to stay on helping out backstage by Cody.

A woman, Christine, rushes outside and announces her quitting the play because Norma was snubbed. Christine is a whirlwind flattering Norma and inviting her out for drinks…at 11 am. Norma doesn’t seem to ever get along with women but Christine has pushed the right buttons, telling Norma how great she is and how she is going to introduce her to all the “right” people of White Pine Bay. At Christine’s garden party, Norma meets George, Christine’s divorced brother. I would say that George needs to be warned, but this is White Pine Bay and he can probably handle the craziness that is Norma Bates. She also meets Miss Watson’s father, Nick Ford, who coincidentally also opposes the building of the overpass.

Out at the fields Paco and Tony have been taken out while on watch in retaliation for Zane killing Johnny.  Dylan suggests doing nothing in return, but I highly doubt this act ends here.

At the motel, there’s a guy looking for Norma-her brother Caleb. Dylan invites him home but when Norma sees him sitting in her kitchen she physically removes him from the house and tells Dylan that Caleb is to never enter her home again. Dylan makes plans to meet up with Caleb for dinner to hear him out. Caleb explains how he and Norma were raised by depressed and abusive parents.  Caleb feels guilty for not being able to protect Norma and wants to make it up to her now. If only he could get up enough money to make an offer on some hotel property that his friends are selling. You can see Dylan’s face fall as he realizes it all comes back to money. Dylan, in his never-ending quest to get someone to care about him, ultimately decides to give Caleb $11,000.

Norman walks Cody home from the memorial Emma has thrown in Bradley memory. She tells him she though he was gay and Norman stammers that he isn’t. She tells him he needs to get out more.  Norman has long been socially awkward; I can’t tell if Cody is making an offhand comment or if this is foreshadowing. I also am curious about Cody as a potential love interest for Norman.  She is very blunt, similar to Emma, yet has that mysterious thing going on which attracted Norman to Bradley.

Norma arrives home from the garden party and Dylan confronts her about not giving Caleb a chance. He tells her that he knows about the abuse and that he understands how hard her life must have been. Norma starts to yell at Dylan about how he doesn’t know what really happened. She tells him that it was Caleb who abused her for years. Dylan claims she’s lying. Norman comes home, walks in on the fight and starts to attack Dylan. Norma screams at him to stop; that Caleb is Dylan’s father.

Well, if that is true, I think that pretty much explains everything about Norma Bates.

What stood out for me this episode:

-Emma behaving like a teen and not a responsible adult. She wants to make “bad choices” if only in her inebriated state. Emma drinks too much feeling bad about still not liking Bradley. I’m always a fan of Emma and I applaud her honesty in this scene. Although, honesty is something she never truly shies away from, admitting this seems to peel away another layer to her character.

-Norman, Norman, Norman. I feel for him still pining for a girl who, though damaged herself, still used another damaged person.

– This episode focused heavily on Dylan and his transparent emotions. He is so quick to trust Caleb and not believe his mother, but who can blame him? He has made numerous attempts at establishing some kind of normalcy (in their world, killing for Norma probably constitutes a good deed) with his mother. I want to tell Dylan that Norma is just not that into him. I want to give Dylan a hug. That’s what he needs.

-Norma, the mother of all manipulation. I can’t tell if she’s in competition with Norman, just unusually close to him (well, yeah), or hasn’t quite grasped the mother/child relationship parameters yet…after 17 years. Norma needs a “Relationships for Dummies” book. She is such a difficult person, not to mention a horrendous mother.  She is so distrustful and yet deep down she wants friends, she wants to be included. Her defensive nature is definitely one that she has passed down and nurtured in her eldest son Dylan.