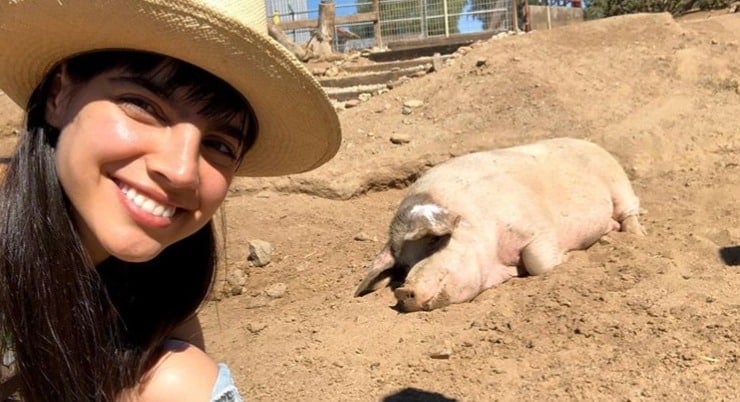 Some of the most successful Hispanic actresses in Hollywood are Jennifer Lopez, Salma Hayek and Eva Longoria. Newer talent is being groomed to take over, and Maria Gabriela de Faria has proven that she has what it takes to make it in the industry. She is only 27, but her achievements pale in comparison with some older actresses. Just like some of her peers, Maria made her start in Nickelodeon before venturing in the film industry. Her appearance in “Deadly Class” has resulted in her star shining even brighter, so here is everything you need to know about the actress.

1. She auditioned for “Deadly Class” through a tape

There are advantages of presenting yourself in an audition since you can see if your presentation is to the casting directors’ liking. Sometimes, it is not possible to be there in person, but that does not mean we cannot find other ways to show the directors that we have the talent to be in their movie. Maria found herself in such a predicament when her agent coaxed her into auditioning for “Deadly Class.” She was not interested because she already had another project in Venezuela, but her agent convinced her to send a tape before traveling to Venezuela.

2. She had to leave the filming of another movie to start shooting “Deadly Class.”

When Maria sent the self-tape for “Deadly Class,” it was only to get her agent off her back, so she headed to Venezuela, ready to shoot her project. When she was getting ready to shoot for the first time, her agent called to tell Maria she needed to drop everything and go back to Los Angeles. Maria had booked the role she had auditioned for through the self-tape, and Los Angeles was only a pit stop to pick her things before traveling to Vancouver, where “Deadly Class” would be filmed.

3. She suffers from anxiety

Maria was meant to play Maria Salazar since the character has so much in common with her; besides the name, both of them suffer from anxiety. Such similarities drew Maria to the character since she could relate to Maria Salazar. Maria revealed in her interview with Pure Fandom that although she is not bipolar like Maria Salazar, she deals with anxiety. She has not sought any medication despite struggling with it for years.

4. She was once in an abusive relationship

Domestic violence has plagued even celebrities, and we remember seeing Rihanna in bruises and a black eye after Chris Brown beat her. Maria’s character in “Deadly Class’ is about a woman who is abused by her boyfriend, Chico, and she can feel for the character because she has been in a similar situation. Maria does not hide that unfortunate experience, and it is what resulted in her anxiety. She always felt like an outsider and tried covering it up, but Maria Salazar has taught her that it is good, to be honest.

5. She expected to be fired on the first day of shooting “Deadly Class.”

Maria has been in front of the cameras in various roles, so you would expect that she is confident enough to be comfortable whenever she is acting. However, after leaving the Venezuelan project to go to Vancouver, she still thought she was not a good actress. Therefore, on the first day on set, Maria felt it was only a matter of time before the other talented actors realized she was a fake and have her fired. To her being in the series was such a challenge that she kept drinking chamomile tea to calm her nerves. It is only after the pilot was done, and the show was picked up that she was comfortable.

Having been born and raised in Venezuela, Spanish was her preferred language, and she did several shows in Spanish. The first film that Maria did in English was in 2016, “Crossing Point,” but then it has taken three years before landing a primary role in an American show. Maria’s television career dates back to 2002.

7. The love of her cat made her vegan

Maria said she adopted Eleanor, an abandoned cat, she found in Columbia whom she came to love with all her heart. Therefore whenever she ate meat, she imagined that someone else was grieving the loss of the animal they loved. Consequently, Maria decided to stop eating meat but stuck with dairy products. Unfortunately, the cheese made her sick, so she became a vegan eventually. The journey was not easy, but she learned about what to replace the meat and animal products with, and now, she believes turning vegan was the best decision of her life.

8. She is not afraid of showing her true self to her fans

Social media has led people to believe they have to be perfect based on the beautiful images they see of those they admire. It has now become a competition of who has the best hair, most successful business, or is in a loving relationship. Maria feels that lying on the platforms is what drives people to be depressed when they think they are the only ones with problems. Maria, therefore, went on Instagram with teary eyes, explaining that she had failed to book a role she had auditioned for, yet she had been so sure that she would get it. She added that not everything has to be fine, and it is okay when it is not.

9. She hopes to be a mother someday

Being entrusted with another human being for the rest of your life can be overwhelming. People have failed to manage money in a business, so the responsibility of children is not always a welcome option. Maria, however, feels motherhood is her destiny as she posted on Instagram that she and Chris are hoping to be parents one day. She added that they have always known that so they enjoy spending time with children of close friends and blood relatives.

10. She is an animal rights advocate and environment activist

Making the world a better place has become a calling to most celebrities, and Maria has not been left behind. She describes herself as an animal rights advocate and environment activist on her Instagram; hence, it is no surprise she also adds that she is a vegan actress. One video Maria posted on her account is that of Mercy for Animals who had undergone undercover in a Mexican slaughterhouse. She urged the Mexican government to oversee the slaughterhouse and enforce animal protection laws.