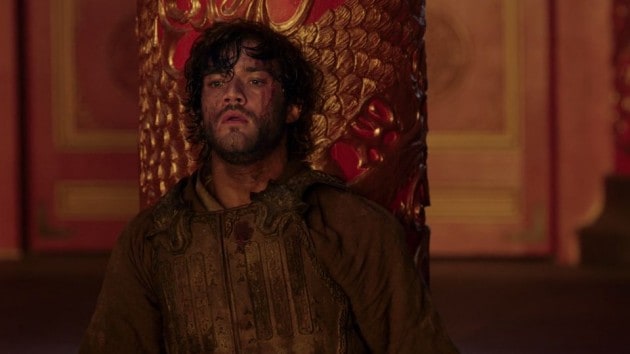 Marco Polo‘s relationship with portraying conflict this season has been a hot mess; the show either spends too much time setting up a climatic moment, or not enough, pushing characters into places the audience isn’t ready to believe they’re in yet. This inability to find balance has plagued stories all season; the Khan’s conflict with his brother isn’t given nearly enough time to develop, while it’s debatable that Marco and the Blue Princess has been given way, way too much only to go nowhere.

It hasn’t been a complete wash (mostly thanks to the performances behind the characters leading the central conflicts, Jia and Kublai), but the ten episodes of Marco Polo‘s first season are a large collection of underdeveloped or overcooked plot points, brought to life by a collection of mostly one-dimensional characters. It’s made for a show that at times, feels extremely hollow in its most dramatic/romantic moments, wedged in between a handful of strong performances and a lot of unnecessary nudity, a confused collage of dramatic elements that “The Heavenly and the Primal” represents all aspects of, positive and negative.

Honestly, one could take any of my last nine reviews and insert the basics here: the more one focuses on the plot mechanics of Marco Polo, the faster things fall apart. Kublai’s sudden beef with cousin Kaidu doesn’t carry quite the weight the show wants it to; like the previous in-family conflict with Kublai and his brother, Kublai arguing with his cousin feels more like empty masculinity fights, rather than deep-seeded ideological conflicts between people who loved each other. Him banishing Kaidu from the kingdom is loud, but what does it really mean for the show? I don’t understand what kind of person Kaidu is, except that he spends a lot of time on his hair (like most of these characters; Jingim spent more time on his battle hair than the rest of the kingdom combined): so why should I care about their argument, beyond the most obvious elements blatantly defined to me by the script?

This lack of actual, interesting conflict is a problem throughout the finale, dissipating only when the show shrinks its scope down to a single battlefield, with Marco’s life and Kublai’s legacy riding on the trajectory of a flaming boulder, exposed on the battlefield. Well-shot, loud, and extremely gruesome, Marco Polo’s Expensive Final War Scene isn’t anything particularly ingenious, but it does a great job covering a lot of square mileage without getting disorienting in any way – something that seems like a low-handed compliment, but really isn’t (those scenes have to be so, so difficult to shoot).

And of course, the final fight scene, where Hundred Eyes drops a shocker on Jia when he reveals he knows the ways of the mantis, the only time this entire season that brought an emotional reaction out of me (man, that moment was awesome!). Well-choreographed and composed of long, static shots, their fight scene was a traditionally-staged spectacle I wanted to carry on for twenty minutes, so I didn’t have to watch Kokochin cry, and then Marco be sad later when she doesn’t show up – so watching Hundred Eyes decapitate Jia felt like anything but a satisfying conclusion to the battle, which was so much more epic in its claustrophobia and passion than anything shown on the huge battlefield a few scenes earlier.

That’s Marco Polo for you, though, as great an example of a show with creative tunnel vision as there is on TV. Marco Polo is interested in the ideas behind stories, exploring the ideas of nobility, religion, and passion through the lens of the Khan’s empire; but when it’s time to take those ideas and build them into fully-realized stories and characters with logical, well-supported trajectories, the show loses focus, wanting so badly to move onto the next cool twist or showy moment that it’s willing to under cook what it’s doing now for what it could do in the future.

It carries onto the ending, which leaves us with one of the silliest images ever: Mei Lin discovers Ahmad’s war painting, which features him smiling on the throne holding the Khan’s bloody head…. does he think nobody will ever see that? Doesn’t anyone think making your intentions known so boldly (and in a secondary sense, to a woman who admits she is a whore and a traitor) is a bit of a death sentence? It’s not a big surprise Ahmad’s power-hungry; with one council member dead and the other two hugging dearly onto the Khan’s legs, there’s no other choice for who on the council could’ve tried to sabotage his empire. It’s a ‘duh’ moment, and completes the season on an eye-rolling moment that screams “Of course you’d go there, Marco Polo.”

After such a goofy, uneven finale, it’s unclear whether Marco Polo can become a quality show in its recently-announced second season. If it can find a way to balance its ensemble better, there’s certainly a chance; every minute less we spend with Marco and his marbles-in-cheeks accent, the more opportunity the show has to build out characters like Byamba, Kaidu, and Kokochin in more interesting and engaging (if not unique) ways. To this point, all it seems the show wants to do is be loud and naked – and there are only a few shows on television good enough at those two things to be considered great television (*cough* Banshee *cough*). As the Khan sits victorious on the throne at Xiangyang at season one, however, Marco Polo is not a great show (and ends season one by removing one of its two or three best performances: at best, it is expensive, undeservedly pretentious pulp with a lot of talent on both sides of the camera. Let’s hope they can find a way to harness that into something grander (or at the very least, something more deservedly grandiose) in season two.