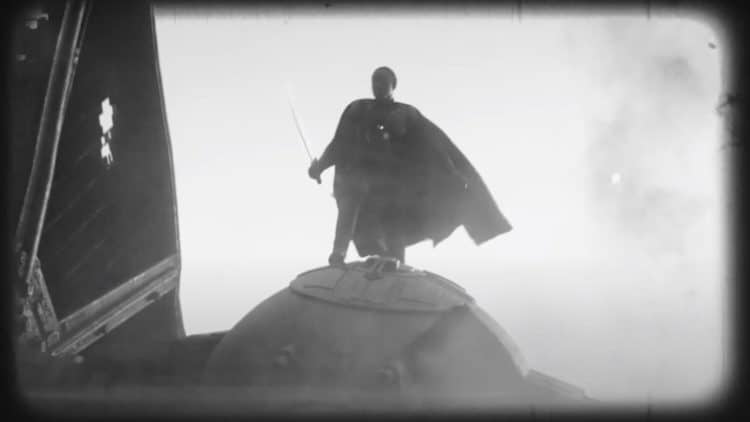 Usually, something like this takes on a different look and sound when it’s redone in this manner, but the final episode of season 1 of The Mandalorian looks pretty much the same despite being done in this style. The focus on Moff Gideon is key since a lot of people want to know where he came from and why he’s so intent on procuring Baby Yoda since it’s obvious that he’s willing to kill fellow Imperials to do this. Of course, Imperials killing each other to further their own agenda, or because their companions are in the way of their goals, really isn’t a new thing since if anyone has been following Star Wars and has learned anything about those that are lower on the chain of command, they’ll know that the lower a person is, the less they matter. So the slaughter of fellow Imperials isn’t too much to worry over since it does happen. But the whole idea of who Moff Gideon is can be seen online, even though it’s not a complete history. That’s likely to come once the next season is underway or over and done with since hopefully, we’ll have plenty of information at that time to deduce just how he came to be so powerful. Plus, there will likely be a book on Gideon at some point since he’s too interesting of a figure to go without describing in great detail.

For instance, he was a part of the ISB, the Imperial Security Bureau, which essentially like Internal Affairs in this world, in its own way. This means Gideon was one of the truly scary individuals that serve the Empire without question and have no trouble doing whatever task they set before him. While a stormtrooper might just be following orders, a lot of those that rise higher in rank are those that are willing to let go of their humanity piece by piece in order to better serve the Empire. Some of them convince themselves that their enemies are worth fighting against and that the Empire is truly bringing peace and cares about the order it instills. Gideon was a part of the group that attempted to wipe out the Mandalorians, which will no doubt be a part of the connection that he has to Din. Remember that Din was rescued by Mandalorians and taken into their culture. Gideon was likely a part of the group that assaulted his people and was responsible for unleashing the droids that wiped out his people. If you’re not seeing that connection then you might need to go back and review season 1.

The likelihood that Gideon was involved personally with Din though is kind of small since in order to obtain the darksaber he would have had to confront the Mandalorians’ leader, which would have seen him claim the weapon by the end since he’s the one currently standing. But it could explain his suit since if he was wounded to the point that his body could no longer sustain itself, the technology needed to keep him alive could be in the imposing suit that’s so much like Darth Vader’s. If anyone is going to ask ‘why no helmet’ it’s kind of obvious that if he was injured in battle that the damage sustained was limited to his torso, as Anakin Skywalker was burned to such a degree that he would die without his suit. Or, it could just be an imposing flight suit that he employs due to its ability to keep him protected. Either way, it does appear that his involvement in the affairs of the Mandalorians is the only way he could have obtained the darksaber, and why he would know anything about Din. He’d know enough about Greef Karga and Cara Dune easy enough since their files would likely be easy to look up, plus, despite the fact that the Imperials weren’t in control any longer after Return of the Jedi, they were still quite powerful, but disjointed since Emperor Palpatine had been their guiding force. Without him, the Moffs began to squabble among themselves, at least until the First Order was formed, and Snoke took over with Kylo Ren as his right hand. One might have thought that the most recent trilogy would have done something different, but it was almost like watching a clone of the first trilogy in a way, with a few roles reversed and a few added in for flavor.

How much we see Moff Gideon in the second movie is going to be an interesting reveal since at this point it does feel that the story will be focusing more on Din and Baby Yoda as he attempts to find a home for the child. But it does feel that we’ll still see plenty of Gideon throughout the season.