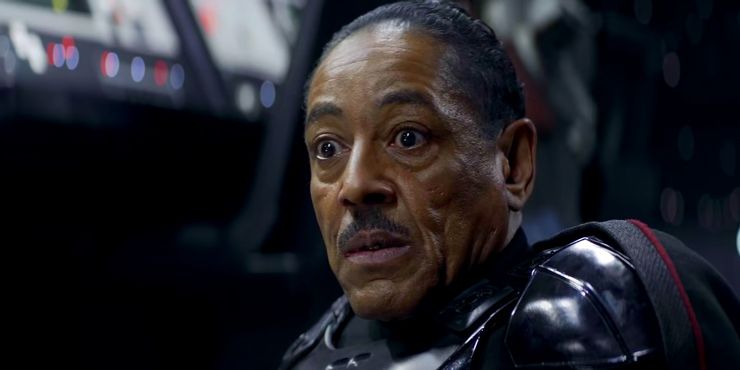 It wasn’t too hard to see that Moff Gideon was sweating bullets when he no longer had any kind of advantage, wasn’t it? Up until the finale of The Mandalorian season 2, Moff Gideon was cocky, confident, and fully in control as far as he was concerned. But when it was apparent that a Jedi had boarded his ship, AFTER he’d already lost just about every advantage, he was ready to end Grogu first, and then himself. This kind of lends credence to the theory that Gideon might have encountered Luke, or another Jedi at one point, and didn’t come out of the encounter as the same person. Imagining that anyone would, especially if their encounter was far more violent than they’d been expecting, might have the same effect. But the theory that Moff Gideon has faced off against a Jedi or perhaps been injured by one, which could explain his fancy suit of armor, is looking like it might be grounded in reality rather than mere wishful thinking. The look on his face made it apparent that he had an idea of what was coming, if not who, so it’s fair to think that as a leader of the Imperial Remnant, or THE leader, he knows very well what a Jedi can do.

Considering that he was taken out by a Mandalorian, which is no insult since Din Djarin is a tough customer that lasted more than two breaths against Ahsoka Tano, it would stand to reason that Moff Gideon is no slouch in a fight. But apparently, he’s very well aware of his own limitations, since his reaction to a Jedi being on his ship, and the fact that he was after Grogu, to begin with, tend to indicate that Gideon was getting a little desperate and was attempting to make certain that if he didn’t get his way then he would make sure that no one could make use of Grogu, and that he wouldn’t be around to punish, interrogate, or whatever else might happen.

That definitely shows a certain level of fear that a lot of people should be able to recognize, but it does leave the question as to why Gideon is so worried about the Jedi Master. It would be great to get a bit of backstory on this since there’s obviously no love lost between Luke and the Empire, but as a Jedi Master, he’s far calmer than he might have been in A New Hope, and might not be as ready to punish people. But being a part of the Empire, Gideon would likely think that Luke was out for blood no matter how calm he might appear. This is one of the downfalls of being the bad guy sometimes, no matter if a person thinks their cause is just and the acts they commit are a necessary evil. Once a person reacts in fear for their life and seeks to destroy as much as they can before trying to find an exit, it’s a little too obvious that they’ve just admitted their guilt and that they know, deep down, that they deserve the punishment they’ll face. It’s likely that with the Republic that Gideon would have been locked away, but his fear of the Jedi was a little more obvious.

This makes one wonder what must have happened between Gideon and the Jedi, or perhaps another Force-user, that he would look upon a Jedi with such fear. It also makes one question whether or not the armor that he wears is out of choice or necessity since it would appear that he might actually need the suit of armor for something other than protection. It’s a theory to be certain, but it’s also one that kind of makes a person think that perhaps Gideon ran afoul of another Force-user and was injured severely enough to need a bit of added protection in the form of life support akin to Darth Vader. Even comparing him to the Sith Lord feels like a giant leap, but there’s a good bet that Gideon’s encounter with the Jedi was anything but pleasant given his reaction to Luke. The look on his face made it clear that he’d realized that all of his options were exhausted save for the most desperate.

Whether this theory would hold up to any serious scrutiny or not isn’t all that important, but it’s an interesting thought all the same since it implies that there’s more to The Mandalorian character than a lot of people realize. As a Moff and leader of the Imperial Remnant, it’s fair to think that Gideon wouldn’t think too highly of the Jedi and would be wise enough to fear Luke after the Galactic Civil War. It’s hopeful that we’ll get to see more of Gideon’s story when The Mandalorian returns.