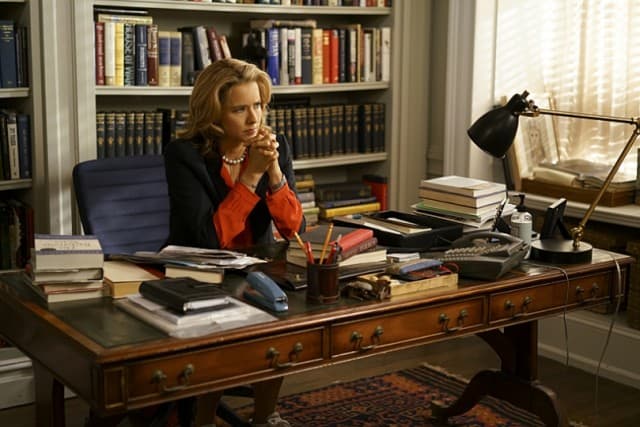 If you want to defeat someone, use their weaknesses against them. Elizabeth will do just that on Sunday’s episode of Madam Secretary. The Secretary of State is on a mission to rescue a group of schoolgirls taken hostage by a terrorist organization called “Boko Haram” after learning that a member has fallen ill due to a deadly virus. I look forward to seeing just how Elizabeth will deal with him. Meanwhile, Henry and the rest of the Murphy Station gets new information on Jibral Disah to pinpoint the terrorist leader’s exact location.

I have a feeling that Hijiryyah somehow played a part in leaking the information of her husband’s whereabouts for the U.S to find to help take her husband down, but it might be something else altogether. In any case, I hope that the man is brought to justice before the season finale because I don’t think this needs to be dragged on any longer than it already is. I know that it takes much longer in real life for the government to track down notorious terrorists who do not want to be found, but I’m just saying that for a television series, things doesn’t need to be dragged on until a proper solution presents itself.

It’s also interesting to find out more about how Henry is adjusting to his new job at the State Department. Before he was still quite new to the team but we know that he’s a fast learner and wants to make his voice heard. I hope that there will be more husband/wife interactions for Elizabeth and Henry in this episode not because I’m now on the Mr. and Mrs. McCord bandwagon but it’s always heartwarming to see them together as each deal with their own world crisis. The one thing that I do not understand is why take a group of schoolgirls hostage? Did they hear things that they’re not supposed to hear or were they simply in the wrong place at the wrong time? I also wonder if there’s an antidote to cure the deadly virus that is infecting the terrorist member (not that he deserves to live).

Check out the preview clip below on the CBS website (sorry Canada. I wish I  knew why CBS doesn’t air their videos across the border but I’m just as eluded as the rest of you).

Photo and Video via CBS