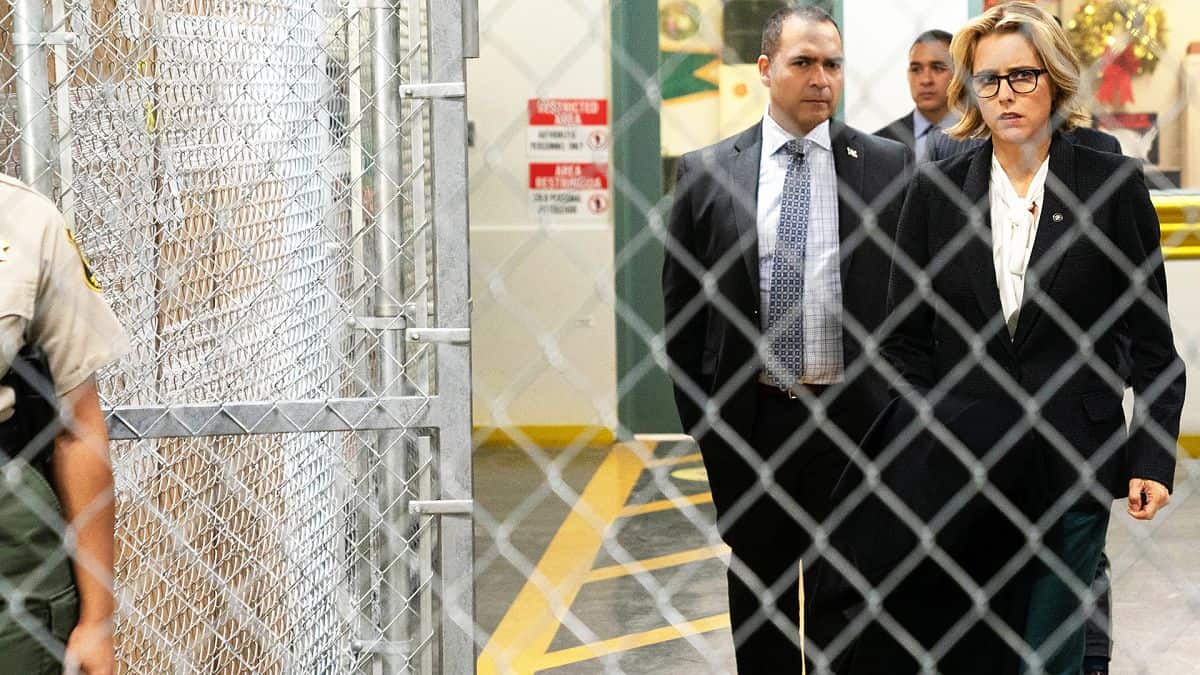 There’s no crueller fate than separating young children from their parents. In this week’s 100th episode of Madam Secretary, we see innocent children put in cages like animals. Oh, did I mention that Elizabeth and Henry are planning to renew their wedding vows? Yeah, not exactly the perfect time to do it, now is it?

I personally find Governor Barker’s behaviour to be un-American and inhumane. To tear families apart simply because they entered the country from another to seek asylum is just plain wrong. The ending scene where Elizabeth visits the detention center in Arizona with Mexican Ambassador Lopez breaks my heart. Seeing children lying on the cold concrete floor like dogs at the pound. Summer camp my arse. I applaud the Secretary when she told the reporters about the conditions inside the center. Well, before Governor Barker told one of the officers to arrest M-Sec for “trespassing”.

Inhumane acts aside, it was great to see Win Barrington (guest star Sam Daly) make an appearance. He spent the good of the hour trying to lobby for the chance to legalize marijuana for medical purposes. I know he didn’t mean to trip Jay on purpose during the basketball game. Though one can’t help but wonder if he truly did for the sake of cornering Jay to hear him out. At least he tried to make amends by bringing a basket of goodies for Jay and a large unicorn plushie for Daisy’s little girl.

Back to the Arizona situation, Jay attempts to get Senator Morejon’s help in reuniting the kids with their parents. The senator almost gave in, but he held on to his beliefs that the parents of those children broke the law by entering the U.S. illegally. So much for that theory, huh Jay? The Secretary also tried to appeal to Morejon’s softer side before the latter met up with Jay at the bar, but one doesn’t need to be psychic to see that it’s a lost cause.

When a female judge replaced Judge Mayfield in the proceedings to get a preliminary injunction, I hoped that things would tip in favor of the good guys. She was about to deliver her verdict to grant the injunction when the scales tipped again, but this time, it’s in Arizona’s favor. I guess even the great Russell Jackson can’t use his vast knowledge of the law as leverage. Even President Dalton is unable to persuade Governor Barker to put a stop to this atrocious policy. A single state is not a sovereign nation where federal laws do not apply and it certainly does not give said state the right to arrest government officials. Then again, Governor Barker seems to think that when he arrested Elizabeth and the protestors for getting the truth out.

Meanwhile, the McCord children are busy helping plan their parents’ vow renewal ceremony and it seems that nothing’s going well on that front either. The wedding band that Stevie booked suddenly disbands due to creative differences. Now with their mother arrested on top of that, it seems that the ceremony might not happen at all. Though from what I’ve seen in the promotional photos for the second part of this episode, it looks like the ceremony will still happen, but with Elizabeth behind bars. Don’t think they will let her out to do the tango with Henry now will they?

Blake indulging Nina in office gossip. Very amusing. It made me roll my eyes, but it was amusing nonetheless. He gave her the Cliffnotes version of the Daisy Dating Life saga.

I wonder if Governor Barker would have arrested President Dalton had the latter been the one who visits the detention center? Somehow I don’t think he has the guts to go through with it. Unless of course, he wants to be taken out by the secret service.

Sweat-Drop Moment: Mike B asking the Secretary for a favor in writing a recommendation letter for his son. The former wants to get his child into a private school where he will not be able to keep up intellectually. I have a feeling that Mike B is doing this to have some sort of leverage. For what, I’m not certain, but when you are dealing with someone like Mike B, there’s always a much bigger plan at play.

Point of Confusion: Since when does Morejon drink cranberry soda? I had him pegged as a Scotch or Whiskey type of man. Though if he drove himself to the bar then I understand completely given that it’s inadvisable for one to drive while intoxicated.