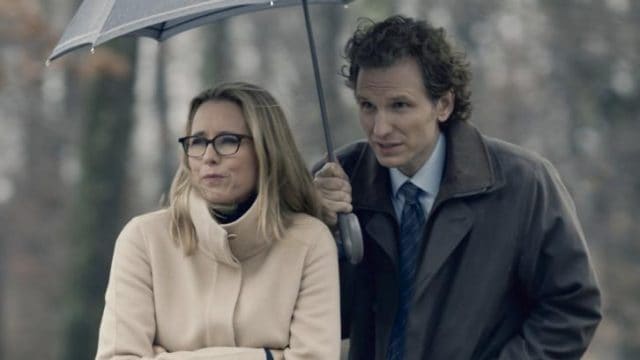 Peace talks are underway in tonight’s episode of Madam Secretary. Though the road to peace will prove to be a difficult one. That is, if the parties involved do not see eye to eye. You may think that staying up all night watching the Australian Open is daunting (though that is pretty epic in its own right.), try negotiating peace.

The episode began with Elizabeth lying in bed. Henry comes in with coffee and breakfast. He then shows Elizabeth a copy of NewsSource magazine with her on the cover. It seems like our favorite Secretary of State might be the recipient of a Nobel Peace Prize. Kudos, Madam Secretary!

Elizabeth, of course, is both surprised and miffed at the idea. She wants people to acknowledge her for her contributions rather than her appearance. Her words to Alison at the end of the episode speaks volumes. “It’s fun to feel pretty, but when that’s the only thing the world is looking for, they miss so much.” Then again, tell that to those in the modeling industry and the film industry.

Back to the issue at hand, Elizabeth tries to negotiate peace between Iran and Isreal. Her efforts backfired on her when an Isreali Rabbi is killed during a demonstration. Oh, and did I mention that the responsible party is an Isreali? Yeah, did not see that one coming. Jay worked around the clock, barely making it home to see his wife and daughter, to make sure that both sides agree to the peace deal.

Speaking of Jay, my heart went out to him when Abby, his wife, told him over dinner that she wants some time apart. I hope that this is only temporary. I do not want to see Jay’s marriage fall apart after what happened with Iran and Isreal. In the end, Elizabeth (and Jay) managed to convince both Iran and Isreal to agree to the peace deal. That and watch their children play soccer in D.C. (thanks to Nelly Conlon) to honor the memory of Rabbi Lowenthal.

Henry also has his work cut out for him as he helps Ian Conroy, a former Marine with the latter’s cover for the Covenant of John. He had wanted to stay on the sidelines at first, but after the suspenseful parking lot confrontation, I have a feeling that Henry has no choice but to help Ian. Wonder what Elizabeth thinks of this? She will approve, but what if Henry’s life is put in danger again? That and Tim Daly is recovering from a skiing injury. I am curious to see what the writers come up with regarding that.

There were some humorous moments in tonight’s episode. I laughed when watching the scene where Elizabeth and Henry went to an event at UVA. Both of them drank from their flutes of champagne at the same time as Nobel laureate Victor Boseman talked about contract negotiations. I also enjoyed the part where Henry tried to lighten the mood by using the nickname Madam Sexy-tary on Elizabeth. Appreciate the effort, Dr. McCord! The scene where Ian compared the Four Horseman of the Apocalypse to The Beatles was hilarious. It was also nice to see Justin Baldoni (Jane the Virgin) guest star as Kevin from Budget and Planning. I almost mistook him for one of the Jonas Brothers. Oops. #MyBad.

Elizabeth and Jay try to get Iran and Isreal to agree on peace and Jay’s marriage might be in jeopardy in this week’s episode of Madam Secretary.