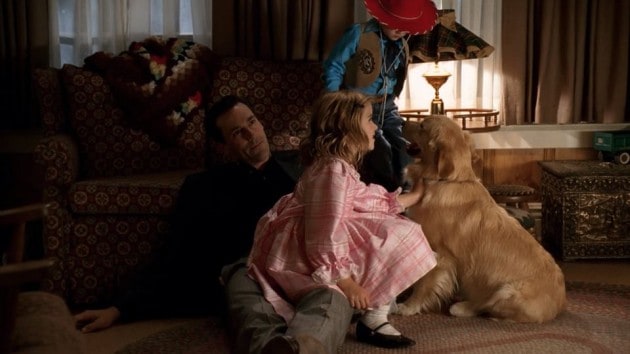 When Matt Weiner pitched Mad Men to AMC, one of the big selling points was thus: “Who is Don Draper?” It was presented to them, I’m sure, as a sort of genre mystery that would engage fans and bring in the audiences that they desired. But it’s obviously a lot less black and white, a lot less binaristic, than those network executives could ever have imagined.

Because, you see, Don Draper is not Don Draper. Don Draper is a real person, but a someone else. Don Draper is Richard Whitman, or Dick, as people like to call him. An old army buddy happens to stumble across him and recognizes him immediately. As we are to learn later, Don is terrified of anyone finding out his identity switch. But at this moment, he wasn’t. He was almost happy, I think. A look comes over his face; I won’t call it contentment, but it’s relief. Here is someone who knows him, and likes him.

Don spends a lot of time building a playhouse for Sally. He spends a lot of that time building a playhouse for Sally, drinking to excess. It doesn’t quite hit at first; what could Don possibly have to drink about this early in the day? It’s a fairly simple answer, but the context of that answer is what is important. Don has feelings for Rachel Menken, a brunette powerhouse who isn’t afraid of him, nor intimidated by him.

He’s wearing work clothes as he puts together that playhouse; a white t-shirt, tucked in to a pair of brown pants. It all fits his body well, but it also is ill-fitting. The suit that Don Draper wears to work makes him look large, and powerful, and robust. But these work clothes cling to him, and they show the smallness of who he is. He isn’t a muscle bound man; he’s actually pretty slim. His arms are not large, his shoulders not that broad. He is in good shape, but only aesthetically. There is nothing to this Don Draper; he is bound by these clothes, and the work that forced him to wear them.

The next outfit is a dark, humorless number; he looks closer to a beatnik here than he did sitting in that bar with Midge. The clothing hides his thinness, but accentuates his dark black hair, and washes him out. Where Don was previously the butt of the joke of the American white male, now he’s just pathetic. He’s gone from being miserable in the yard to miserable in his home; he barely speaks to anyone, and does so reluctantly. His most honest moments come from behind a camera, taking in the sights and sounds of the people at Sally’s party.

One of the reasons that Don always had the promise of a being a better person is because of scenes like this. He always had an air of incredulity at the masculine posturing of those around him; he never, to my knowledge, engaged in the kind of tall tales about sexual exploits. He rejected much of it as phony. Having grown up where he did, that is not surprising. Don tries to inch away from Carlton and Ernie and the jerk who made the bad joke in the kitchen. He busies his hands and tries to drink more. But he cannot get away from them until he abandons the party and drives to an overpass and sleeps. That is the enigma that is Don Draper: a self-aware man who loves his family, and a selfish bore who runs at the first sign of discomfort.

When Don and Rachel kiss, he is the one who backs away. He initiated the kiss, but shifts the blame on to her, as subtle as he can. Hey, he says, pulling away, I’m married. Rachel stares at him for a moment and for just a moment she gets who he is at his core but she is too charmed to cut her losses yet. Don wants what he wants, but he also wants to be the hero. Don wants to be bad and be good, too. Don is a little boy, trying to pin the blame on his brother, while still holding the bat and ball that broke the window.

Don is at home in that moment. He is in his suit and tie, with his hair slicked back. He is broad and tall and he towers over Rachel. He looks the part now. He won’t later, at home, but he does now. Eventually, he’ll end up under that overpass, staring at a passing train. He’ll be frozen in place, drunk as the day, watching hundreds of people speed along to their destinations. Don will not. These people have acted, in order to get home; they bought a ticket and waited as the cars filled. They wanted to go somewhere. But Don reacts; he sees the large house with his growing family, and he waits for less than ten seconds before moving off somewhere else.

He comes back with a puppy, all golden fur. He sits drunkenly, half smirking and half asleep, staring at the trembling face of his patient wife. He kisses his daughter on the head, and she forgives him. Sally isn’t old enough to know that her father is an empty shell, filled only on occasion, and she won’t really know for sure for a very long time.

Don’s problem in these early seasons is his desire to be the American male archetype. It’s not that he can’t pull it off, because he can; rather, it’s because he pulls it off that he suffers so much. His desire to be that person is the reason he misses Pete Campbell early; he thinks that he can pop the weasel’s balloon and stuff him back in the corner office like so many old files. But Pete Campbell is ambitious, and what Don mistakes for youthful exuberance is actually burning bush. It’s a warning of things to come that he never sees, and it almost costs him everything.