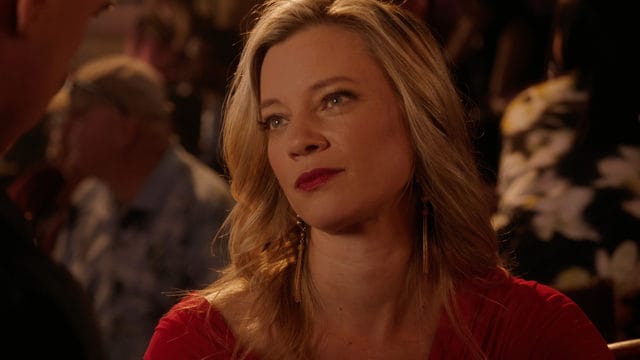 We don’t much think of Jack Dalton as a man who needs to be in a relationship. The kind of relationship that keeps him grounded and happy, and is someone he loves so much that he counts his blessings every night for this person. That’s what MacGyver is for. That doesn’t mean it wouldn’t be nice to see Jack go on a date that lasts longer than one course of a meal. Again, I’m sure MacGyver has treated him to many fine meals. If one day there is a Mrs. Dalton in the picture, we’d be happy with that. That day is not today.

You know things are serious when Mattie has her angry face on. Half the time she uses that face because of impending doom. The other half of the time that face comes out because of Jack. This time it’s about Duke Jacoby, one of Jack’s old CIA aliases. Duke Jacoby was created to run crime out of New Orleans in the wake of Hurricane Katrina. He was so well-connected, so hated, and so expensive a cover that even the CIA wanted to take him out. It would be too on-the-nose if it wasn’t true. When all of Jacoby’s old accounts are reopened, Mac, Jack, and Mattie have to go down to NOLA to investigate. But the information is expensive. Jack finds out from his old friend Willie that his wife, Dixie, is opening his accounts. That’s funny because neither Jack Dalton nor Duke Jacoby has ever had a wife.

What’s the saying? Love makes you do crazy things. Things like steal all of your fake husband’s money and communicate with your CIA girlfriend in secret. This is all well and good until you get caught. Bozer was not as careful as he thought he was in his communications with Leanna. This puts Riley in a tough spot since she is duty-bound to report any breaches to Mattie. But after realizing just how sappy and happy Bozer is with Leanna, she decides to keep his secret, and even build the lovebirds a better encrypted form of communication.

At least Bozer’s relationship is real. Jack has just a little too much fun being fake married. That’s all while he finds out that Mrs. Jacoby stole 16 other CIA covers, some of which are still active. Luckily, it isn’t the worst case scenario. She’s not a foreign operative, just a con artist who was working a government IT employee, and got a really long look at his computer. After meeting his faux wife, and being kidnapped with her by some unforgiving mobsters, Jack actually likes his wife. Mrs. Jacoby even helps Phoenix find Jack when he is ransomed to a different enemy. It’s a good thing too, since Jack was about five seconds away from being flambÃ©ed.

Duke Jacoby however, is nothing but ash now. Thank goodness. Some secrets are just too much trouble to keep alive. Love, on the other hand, is worth fighting for. Jack finally gets more than a first date, with his faux wife whose real name is Dawn. At least we think that’s her name. Who knows for sure, since she did go home with Jack to rob him. Then again, she didn’t take anything sentimental like his father’s dog tags, so…maybe?

A con woman who steals from you isn’t exactly a stable relationship, but is there hope for Bozer and Leanna?