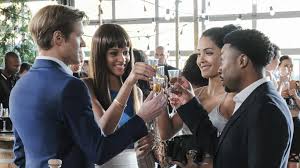 MacGyver can make fun pretty much anywhere he goes, so why not a honeymoon? This means everyone is getting married, and MacGyver’s wife-on-loan is none other than Bozer’s girlfriend, Leanna. Recall that technically, Leanna and Bozer risk court martial if they are caught together. The fact that they are put on assignment together is not a coincidence, but who is pulling the strings? As it turns out, the puppet master has more to hide than we knew.

Phoenix gets the chance to put an elusive Serbian war criminal, but two decades on the Most Wanted List with no progress isn’t promising. That is, until, the war criminal’s youngest son, Omar, suddenly marries Mia McQueen, a social media maven. And unlike her new husband, Mia has no inclination toward security. She wants a proper honeymoon, which gives Phoenix the perfect opportunity to intercept the happy couple.

It takes about 10 minutes for MacGyver to realize that Bozer and Leanna are an item. But everyone has a job to do. Despite a restricted deadline, Bozer, Riley, MacGyver, and Leanna find that Mia and Omar are ripe for manipulation. Just get a little liquor in them, and the conversation flows. Within 24 hours, they are all best friends. It only takes two minutes of conversation the next morning to undo all of that hard work/drinking. The only way to find out where Omar’s father is now is to drug him. This means sending Leanna in, alone.

Leanna gets in, and gets more than she bargained for when Omar confesses to killing his brother to take his place in their father’s regime. Even worse, Omar gets himself out of his sticky situation, just in time for him to be reunited with his father Boris. Once again, these people may have force, but they are easily manipulated by family friction. Stop me when you’ve heard something original here. The ambitious, spoiled youngest son kills his older, more equipped brother to take over his place, then plans to turn on his father too. The only new part of that story was MacGyver jumping in with a heavy dose of chloroform to knock everyone out.

Phoenix gets their man, and its revealed that pretty much everyone knew about Bozer and Leanna. Mattie let it go on because she thinks the “no contact” rule is stupid. Bozer and Leanna can still see each other as far as Mattie is concerned, so long as Leanna’s bosses at the CIA don’t look too closely.

Back home, Jack takes on a much more dangerous mission: breaking into Mattie’s personal safe. He can’t bring in his usual team to help, not only because they are away, but because he is looking for something very specific that he can’t reveal until he has it. To that end, he brings in Jill (who probably shouldn’t help Jack since he doesn’t bother to learn her name), and Riley’s father, Elwood (guest star Billy Baldwin). Poor Elwood didn’t have a prayer of being able to say no, which is a shame since he is on the straight and narrow now. It does pay off, in a very big way. Do we think that Mattie has poor intentions toward MacGyver? No. Do we think that she has been lying to him? Yes, and now there is incontrovertible proof. Mattie definitely knew MacGyver’s father. But why is she lying?

Throw out those theories on how much Mattie does or doesn’t know about what happened to MacGyver’s father, and stay tuned to see if she comes clean.

MacGyver goes on a honeymoon adventure to catch a war lord, but the real targets are right under his nose.