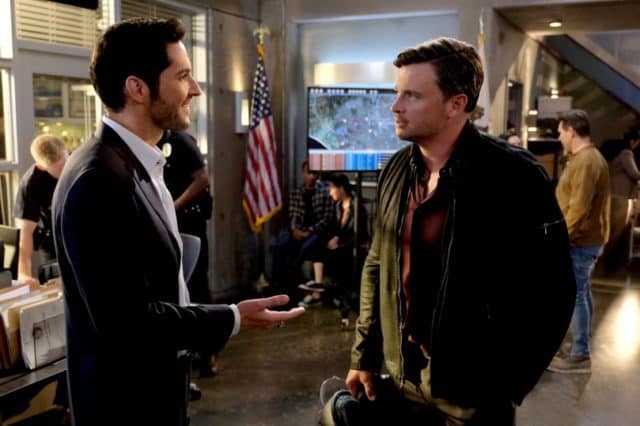 “Every time a bell rings, an angel gets its wings.” This quote from the classic holiday movie It’s A Wonderful Life doesn’t exactly apply to our favorite Devil. On tonight’s season three premiere of Lucifer, the Devil gets his wings back, and he’s none too happy.

The hour began right where the previous season left off, in the middle of a desert. Imagine the irony when Lucifer hitches a ride in an armored truck only to realize that it’s driven by the jewelry thief he came across while searching for Mama Morningstar. As Lucifer made to get into the passenger seat, I practically yelled at the screen. Lucifer Morningstar you have your wings back! You could just fly yourself back to Los Angeles!

After being “apprehended” by the Lancaster Police Department, Lucifer returns to the precinct thinking everyone, including Detective Decker, would be frantic over his disappearance. When the detective told him that she hadn’t seen him for two days, the Devil was flabbergasted. Then again, waking up in the middle of the desert can make one lose track of time. Not that I have been in a similar situation, it’s just that I’ve seen quite a lot of films and television shows that have kidnapping as part of the narrative.

The scene where Lucifer was going to tell Detective Decker the truth made me sit on the edge of my seat. I thought that this would be the moment where the detective would finally believe everything that Lucifer had said to her, and it would get Deckerstar back on track a little bit. Disappointment and confusion flooded through me when Lucifer couldn’t change into his Devil form.

I figured that he would just show Detective Decker his wings rather than his Devil face, but since he cut them off again (either by himself or with Maze’s assistance), he can’t do that. Now his Devil look is magically gone, it raises the question of why is this happening? That, and why would Daddy Dearest make Lucifer’s wings grow back again after being cut off for the second time? Is this God’s way of saying that He forgives Lucifer? If that’s true, then could he return to the Silver City?

We then meet the new lieutenant, Marcus Pierce (Smallville‘s Tom Welling). His overall demeanor to everyone just screams arrogance. It’s like looking in an obnoxious mirror, isn’t it, Luci-boy? The lieutenant’s practically you without the desire mojo thing and the superhuman strength. I look forward to the episode where a very jealous Devil comes out to play. Maybe I should make some popcorn for the occasion. It’s also interesting to see that Ella is a big fan of the lieutenant’s. The lab tech even bought donuts for him and applauded like a fangirl after the man introduced himself.

The case of the week reminds me of that episode of CSI: Miami where a brother hired a company that specializes in extreme situations like murder, kidnapping and such. A wealthy hotel owner Josh hired a kidnapping company called Snaatch to kidnap his partner Steve in retaliation for the latter leaving a tiger in his backyard. Josh, oblivious to the truth, leered at the detective inappropriately. Lucifer wanted to defend the detective’s honor for the hotel owner’s comments, but Detective Decker stopped him. To paraphrase Martha Rogers from Castle: Detective Decker can take care of herself. She doesn’t need a big, strong Devil to fight her battles for her.

Speaking of a big, strong Devil, Lucifer managed to figure out who was responsible for his Devil-napping: A Snaatch employee named Sam. The man also took Steve and was planning on swapping the latter for Lucifer when he freaked out after seeing Lucifer’s wings. Sam then confessed that someone named Sinnerman is the one who hired him to kidnap Lucifer. The Snaatch employee is later found with a metal rod through his chest in a foreshadowing scene towards the end of the episode. Makes one wonder who the mysterious Sinnerman is. Could it be one of Lucifer’s siblings bent on personal vengeance or is something much darker at play?

I loved the part where Lt. Pierce introduced himself to Lucifer. The line “Your file is as long as my johnson” amused me greatly. Keep up the great work, Lucifer writers! Oh, the whole Daniel Ladouche thing? Good one! Guess Lucifer still refers to Detective Espinoza as Detective Douche, even though he called him by his name throughout the episode.

I felt a bit sorry for the Devil when no one seemed to care about his disappearance. That, and when Detective Espinoza slapped him on the back. Though in his defense, he doesn’t know that Lucifer had just cut his new wings off so just let that one slide, okay Luci-boy? Also, how in the name of your old man did you know Detective Decker’s cup size?

My heart also went out to Detective Decker. She cares for Lucifer a lot, beyond the professional boundary and friendship. Though the fact that he won’t tell her the complete truth breaks her already shattered heart. Lauren German said in an interview with DC All Access that Detective Decker wants to stop obsessing about Lucifer opening up to her and go back to who she was before Lucifer came into the picture. This makes me a bit worried for my Deckerstar, but I remain hopeful that things will work themselves out in the end.

The scene where Amenadiel couldn’t figure out the emoji text that Lucifer sent him about their Mother made me chuckle. It’s okay, Amenadiel, you’re not the only one who doesn’t understand emojis. I sometimes have a hard time deciphering them myself. I rolled my eyes in amusement when Amenadiel went to Lucifer’s penthouse and said to the masseuse that Lucifer hired that he needed a bigger towel. Oy vey.

I had another eye roll moment when Detective Decker and Lucifer went to the hotel to question Josh. Lucifer’s comment about buying one’s own establishment to justify one’s decadent lifestyle is beyond Alanis Morissette ironic. You pretty much did the same thing, Luci-boy! It doesn’t give you the right to say that about someone else!

The part in the food truck where Lucifer stated that Detective Decker is his partner, I all but applauded. Yes, she is your partner! Both at work and in life! Well, the life part will come later, but you know what I mean! I would also like to applaud Dr. Martin for seeing through Lucifer’s BS and made him reveal his wings. I grinned when the therapist asked if wings are like body hair. That, and the wing-sectomy comment. Oh, and Lucifer? You are so your Father’s Mr. Potato Head!

Lucifer Season 3 Episode 1 Review: "They're Back, Aren't They?" 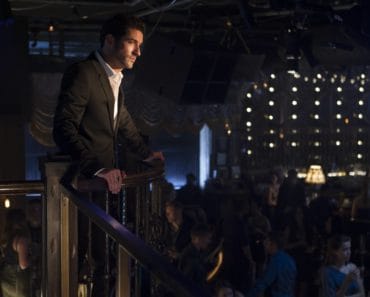