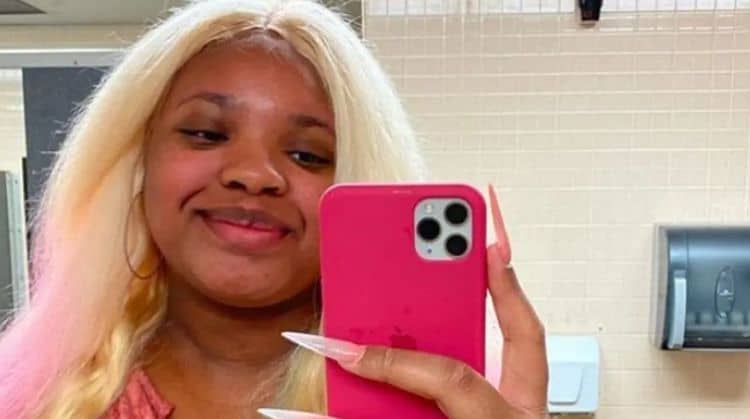 At this point, I think it’s safe to say that we all know how weird the internet can be. However, Brittany Johnson AKA Lovely Peaches, has found a home in one of the weirdest corners the internet has to offer. The 19-year-old social media star rose to fame for her comedic songs and her willingness to do all sorts of strange things on camera such as eating used tampons and licking poop. Despite the gross nature of her content, she still managed to build a huge social media following, particularly on TikTok. But as you can probably guess, Lovely Peaches’ time in the spotlight has been full of controversy. Continue reading for 10 things you didn’t know about Lovely Peaches.

1. She Deleted Her Social Media Accounts

If you never got the chance to see Lovely Peaches’ content, you might just be out of luck. All of her social media accounts have been deleted amid the current controversy she’s involved in. Those who really want to see what all the fuss is about can probably find compilations of her content on YouTube.

2. She Allegedly Hired Someone To Assault Charli D’Amelio

Summer 2020 has been a very eventful season for Lovely Peaches – and not in a good way. A few months ago, she was banned from TikTok after she allegedly hired someone to assault and rape D’Amelio. Peaches is known for saying and doing obscene things, but even her followers felt that she had crossed the line by potentially putting D’Amelio in harm’s way.

3. She Claims To Abuse Her Daughter

Just when you thought Lovely Peaches’ story couldn’t get any more bizarre, it takes yet another turn. Throughout her time on social media, she made several claims insinuating that she abuses her infant daughter, Cora. She has even gone as far as threatening to sell Cora into sex slavery or kill her.

4. She Is A Prostitute

There isn’t much verified information about who Lovely Peaches is in real life. Aside from her name being Brittany Johnson, one thing that seems to be consistent about her story is that she works as a prostitute. She even claims to have gotten multiple STDs/STIs through her work.

5. There Is A Petition To Save Her Daughter

The threats that Lovely Peaches has made against her daughter certainly haven’t gone unnoticed. There is a Change.org petition that seeks to have Cora removed from Peaches’ care. The petition has a goal of 150,000 signatures and it’s already gotten over 98,000. You know things are bad when a bunch of people who have never even met you are willing to sign a petition to save your daughter from you.

When Lovely Peaches first started posting her brand of bizarre content, most people just assumed that it was all part of an internet persona she was creating. However, it appears that she wasn’t just acting. According to a Reddit thread, Peaches’ mother died by suicide when Peaches was just 15-years-old. The source suggests that her mother’s passing was a catalyst for mental and emotional struggles.

7. She Claims That She Doesn’t Bathe Often

Lovely Peaches’ odd behavior doesn’t just stop at the things she does, it also includes things she doesn’t do. In a video she posted, she insinuated that she rarely showers. In fact, she suggested that she only bathes once a year. Of course, there’s no way to verify whether or not this is true or something she said for shock value.

Peaches was born and raised in Louisiana and some have suggested that she lives somewhere in the Baton Rouge area. However, her exact whereabouts have been a mystery to her followers. The reality is that if people knew exactly where she lived, they would have reported her to authorities.

9. She’s Being Investigated By The Police

Getting Cora out of Peaches’ custody has been at the top of the priority list for anyone who has seen Peaches’ videos; it looks like that day has finally come. According to a report from Heavy,  the FBI has launched an investigation against Peaches. However, it appears that she didn’t actually have custody of Cora to begin with. The article also says that Cora’s grandmother has actually had custody of her the whole time. Any content Peaches posted that included Cora was taken during visitation.

10. There Was A Rumor That She Had Died

If the internet is good for one thing, it’s a death hoax. Lovely Peaches found herself at the center of one of these hoaxes a few months ago when reports started to circulate that she had passed away. It’s unclear how this rumor started, but it was quickly shut down.