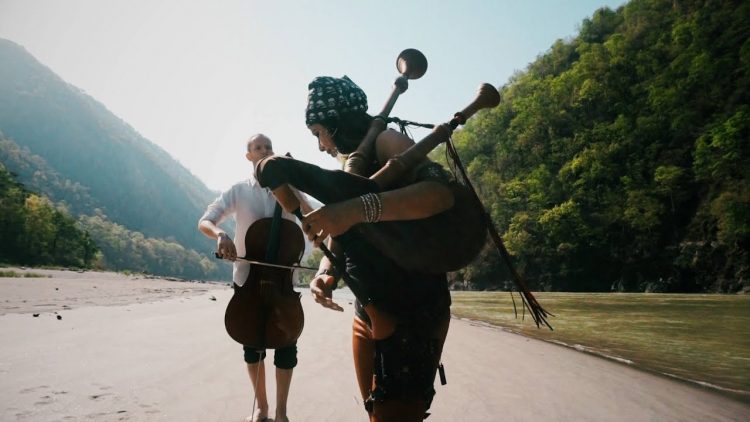 It’s too easy to wonder if the music is dubbed in a video such as this, but the simple fact remains that this piece of music, the theme song to the Pirates of the Caribbean, is still quite powerful and, when heard in this manner, is extremely impressive. If you do watch the video closely, however, you’ll see that there’s no dubbing as the performers are actually putting in the work and making the music flow as much as they can. It does stand to reason that this production might have required a few takes to get completely right, and perhaps even a bit of editing here and there to finish it off and make it look like a polished video. But one can easily credit everyone who was involved since it comes off as a powerful piece that manages to convey the theme of the popular Disney movies in a convincing manner. The Pirates of the Caribbean is instantly recognizable to many people since it’s one of those that created an emotional impact when it was first played, and therefore it became etched in the minds of many fans.

The selection of instruments is kind of interesting.

Bagpipes aren’t for everyone and as a result, not everyone likes or understands the sound coming out of the adorned bladder of air that usually sounds horrible when one is first starting out. It’s fairly common to see people take up the cello, even if it does look slightly imposing to those of us that aren’t musically inclined. Hey, it’s a big instrument that looks as though it could break if one were to drop it in the wrong way. But some folks can play it in a manner that’s absolutely beautiful and mesmerizing, just like the bagpipe to be honest. Both instruments have been around for a while, and while the bagpipes are kind of unusual for a lot of people and not always as recognizable, they’re the type of instrument that can make one feel emotional in one way or another when the person playing them knows what they’re doing.

The bagpipes are incredibly versatile.

Seeing as how the bagpipes have been used for a few different theme songs and tracks now it’s almost impossible to say that their sound can’t be adapted for one track or another. This is especially true since listening to another video in which this same woman managed to play Shipping Up to Boston by the Dropkick Murphys and then launch into a track from Metallica makes it easy to believe that much like any other instrument, the bagpipes can create at least one version of any popular song. It’s very easy to imagine that those who made the instruments way back in the day didn’t have any idea of how they would be used in the years to come, and it might even be safe to say that those who are far more traditional might not fully appreciate the songs that are employing said instruments, but keeping an open mind is important in this matter since it makes one far more susceptible to accepting the wonderful and diverse ways that these musical tools can be utilized.

It’s not disrespectful in the least to think that these instruments can be used to recreate popular songs from any genre.

Amazingly enough, there are still plenty of people out in the world who would think that using these instruments to produce music that is used in a commercial manner is disrespectful and not ‘true music’. Hey, they get to have their opinions too and it’s not hard at all to think that they are so set in their ways that trying to change them is next to impossible. But the fact remains that music is music, no matter how it’s produced and in what genre it tends to fit. Using instruments to produce music in one form or another is kind of like using whatever elements are at hand to create a story since regardless of what’s put out there for the public to hear, the fact remains that it is music and that it is bound to be enjoyed by someone who happens to appreciate the effort that was put forth.

This isn’t the first time that classical instruments have been used to produce a hit song or track.

There have been other instances in which cellos and other instruments have been used to create popular tracks, and they’ve been just as entertaining since they bring together the elements of rock and roll and classic music that people enjoy. Songs taken from every type of genre have been reproduced in several ways using instruments that aren’t known to be employed in such a manner on a regular basis, and people tend to like it. This kind of proves the point that no matter what something is made for, there’s always a way to stretch past those comfort zones to create something that people will enjoy.